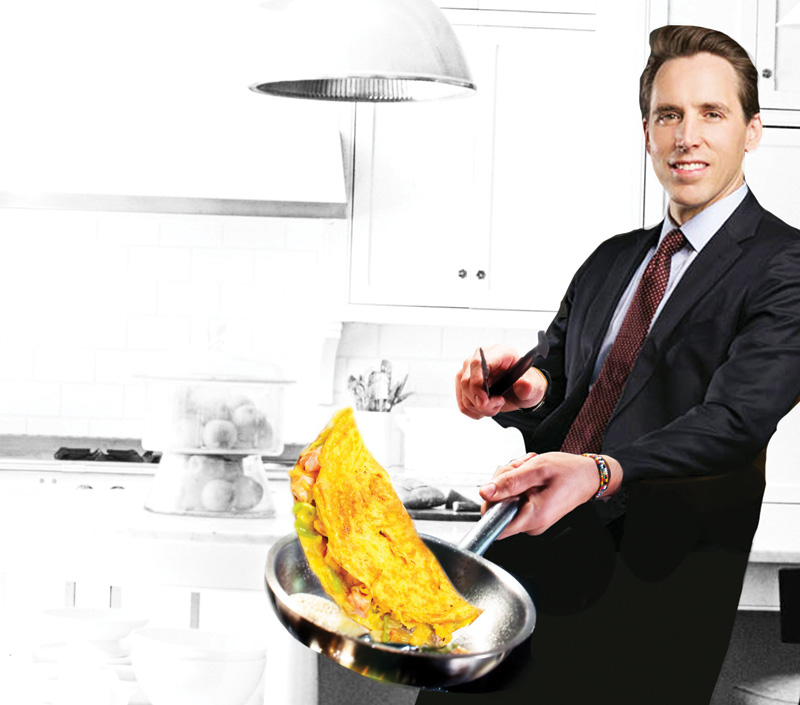 Right around the time that Missouri voters thwarted Chris Koster’s bid to become governor last fall, a panel of West Coast federal appellate judges denied the state’s outgoing attorney general another victory. They slapped down Koster’s final effort to champion the cause of egg producers who wished to confine their hens in cruel conditions.

And so it seemed that the Show-Me State’s embarrassing foray into backward-looking agriculture policy would fade from memory, along with Koster’s political career.

But no — the great Missouri egg fight goes on.

That last lawsuit, led by Missouri and joined by five other Midwestern states, was dismissed — but dismissed without prejudice, meaning the case could be resurrected if a state attorney general were willing to take it to the U.S. Supreme Court.

Guess who has his own omelet pan?

Josh Hawley, the hungry lawyer and politician who succeeded Koster, would love nothing more than to strut his stuff in front of the Nine (assuming the nation’s highest court is up to full strength by then). As a religious conservative, Hawley surely pictured himself arguing to uphold Missouri’s right to enact a noxious “bathroom bill” aimed at transgender teenagers, or pushing to outlaw abortion. But such causes lack swiftness. His most likely expressway is instead the hen house — if the Supreme Court agrees to hear his cluckings.

Three years ago, Koster took issue with a 2010 California law that said eggs could be sold there only if out-of-state producers complied with standards that California voters passed in 2008. The ballot measure requires cages roomy enough for hens to stand up, turn around and spread their wings.

According to Koster, those standards harmed Missouri egg producers and infringed on free trade among the states. But a federal judge in California — and, eventually, the appeals panel — said Koster and the other plaintiffs had failed to show that the California law had harmed their states and citizens. If Midwestern egg producers feel aggrieved, they can file suit on their own behalf, the judges said.

But to hear Hawley tell it, the California standards indeed do harm Missouri citizens. The law out west, Hawley contends in a news release notable for its lack of originality, is “an attempt by big-government liberals to impose job-killing regulation on Missouri” and will “cost Missouri farmers tens of millions of dollars.” Hawley further alleges: “They will cost Missouri families. And they will cost our state jobs.”

Koster made similar claims in his lawsuits but wasn’t able to substantiate them to the judges’ satisfaction. It isn’t clear, for instance, that the California regulations have caused egg prices to rise in Missouri.

Hawley evidently believes he is rooster enough to succeed where Koster failed. And so Missouri taxpayers, who already have wasted $120,513 on litigation costs in this quixotic episode, will underwrite a new chapter in the egg saga.

Really, though, the story isn’t about eggs or poultry farmers. It’s about political ambition.

Koster, a Democrat, used the case to court agricultural interests and rural voters — though not nearly enough of them, as it turned out. Now, Hawley believes it’s his ticket to litigation celebrity.