Edokko Restaurant entertains with its food — not tired teppan-yaki acts 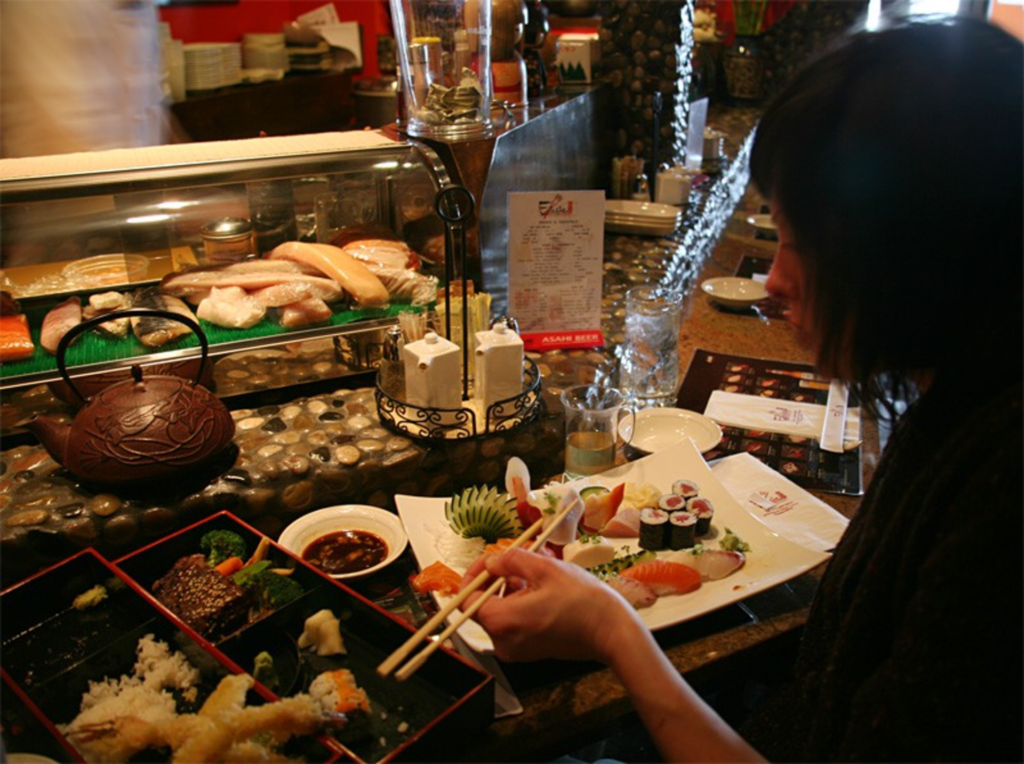 I recently discovered a local restaurant that is something I never dreamed possible: a Japanese steakhouse without those big teppan-yaki grills and those chefs telling bad jokes as they spin eggs, toss shrimp, juggle pepper shakers, and create flaming volcanoes out of onion rings.

I’ve been complaining about this shtick for years, even though I know I’m in the minority. Most people I know love teppan-yaki grills precisely because of the theatrics. “It’s the only time you can go out to dinner with people and not have to actually talk to them,” says my friend Chris.

Ann Ai, owner of the year-old Edokko Restaurant in Lenexa, says she wanted to open a place that offered sushi and traditional Japanese teriyaki and noodle dishes as well as the hibachi-style entrées served at the teppan-yaki palaces, but without the big, shiny grills. “That kind of cooking is too noisy and greasy,” says the China-born Ai. “It’s not the kind of restaurant that I wanted.”

Ai knows that she’s bucking popular opinion. On New Year’s Eve, she says, a group of six with reservations didn’t stay because one of the diners was disappointed that there wasn’t a teppan-yaki chef to toss a grilled shrimp into her mouth. “Couldn’t you have taken her back into the kitchen,” I wondered, “and asked your staff to throw a few in her direction?”

What plays as highly entertaining dinner theater to some people is emotional seppuku for me. I can’t bear the idea of sitting directly under a throbbing ventilation fan while listening to a man in a white jacket try to engage his audience with a tired culinary-vaudeville act. I think dining experiences should be restful, not chaotic. (The word restaurant, after all, is derived from the French verb restaurer — “to restore.”)

Calming qualities abound in the space designed for Edokko — comfortable booths, vibrant and warm colors, and soft music playing. (The restaurant’s name, Ai says, is a term used to describe a native of Tokyo.) And there are so many different menus that it seemed like the kimono-clad servers were bringing them up from the stacks of the Yokosuka Library.

The sushi menu alone is a 24-page collection of color photographs, each bearing a neat little description of a starter, salad or maki roll. The Lenexa roll, for example, is described as “tempura white fish, imitated crab meat, avocado, cucumber and spicy mayonnaise sauce in a soy wrapper.” I’ll forgive the “imitated crab” typo — I was just happy to see that Lenexa, famous for its spinach festival and TV star Jason Wiles, now has its own signature maki roll.

On my first visit, I dined with Diane and her two sons, Solomon and Isaac. Diane needed to unwind from a hectic day and required an immediate restorative: a Gingertini made with ginger-flavored vodka. I settled for hot green tea, a plate of excellent pan-fried dumplings, and a roll made with bits of deep-fried lobster tail. “Americans love fried sushi,” one of the servers explained to me. “Americans love fried anything,” I replied, while looking through the dinner menu for more deep-fried mischief I could get into. A plate of tempura-battered shrimp and vegetables? Bring it on!

The shellfish in the lobster roll and the crabmeat-and-mango roll (another tempura-battered and fried assemblage) is the real thing, and the menu reports this with pride. “I like this place,” Diane said as she dipped a thick disc of Green Devil roll (spicy tuna, tempura shrimp, avocado and cucumber wrapped in peridot-colored soybean paper) into a puddle of soy sauce. “It’s very attractive, very stylish.”

It might also be the metro’s only restaurant with wall mosaics of sumo wrestlers created from shiny river pebbles. Looking at figures fatter than I am emboldened me to order a whole bento-box dinner for myself. It included a salad, miso soup, rice, fruit, an assortment of tempura — more fried foods, hurray! — a California roll and beef negimaki.

“We are one of the few Japanese restaurants that serve negimaki,” Ai said of the pounded beef rolled around scallions and asparagus. I’m not sure I’ve ever had it, but it was quite tasty — the Japanese version of my grandmother’s braciole.

And we were all intrigued by the fact that Isaac’s hamo — eel with a delicate truffle sauce — was a plate of fat, flaky hunks of tempura-battered pike eel that looked and tasted remarkably like the fish and chips found at the Power & Light District’s Raglan Road Irish Pub. We loved it.

For dessert, we shared a few wedges of mango and mocha-flavored mochi balls, a dish that I can’t get too excited about thanks to the sticky rice wrapper. It was an anticlimax to an otherwise glamorous dinner.

I returned the following week with Becky and Carol Jean. Becky loves sushi, while Carol Jean is from the Midwestern generation that believes raw fish is something to feed the cats, not humans. Still, Carol Jean bravely sampled a slice of Lenexa roll and a Rainbow roll topped with a pink slice of fresh salmon, dunking both in lots of soy sauce first. For dinner, she required something cooked: The simple pan-fried tilapia turned out to be both good and comforting.

Becky went the hibachi route, getting a meal that would have involved lots of hoopla at a teppan-yaki joint but was straightforward at Edokko: a plate of plump, beautifully grilled scallops and vegetables sided with miso soup, a leafy salad drenched in ginger dressing, little shrimp in an oddly spiced and sticky yellow “hollandaise,” and fried rice. Becky raved about it all.

By this time, I was feeling annoyed by the sumo-wrestler mosaics, so I ordered one of the noodle bowls, thinking it would be light and healthy. The fat ropes of udon noodles in a soothing amber broth were certainly restorative on a bitterly cold night, but they needed a little something — fried tempura! The long, crunchy shrimp were fabulous, but one more fried dish and I’d pass as a sumo wrestler.

Becky’s dinner included “dessert,” a tiny pastry ball that the waitress called a cream puff — I think it was filled with the creamer substitute that’s served in little plastic containers at diners. Becky took one bite, and it splattered all over the rest of us like a paint ball. It was messy but unintentionally hilarious — a lot more entertaining than a volcano made from onion rings.