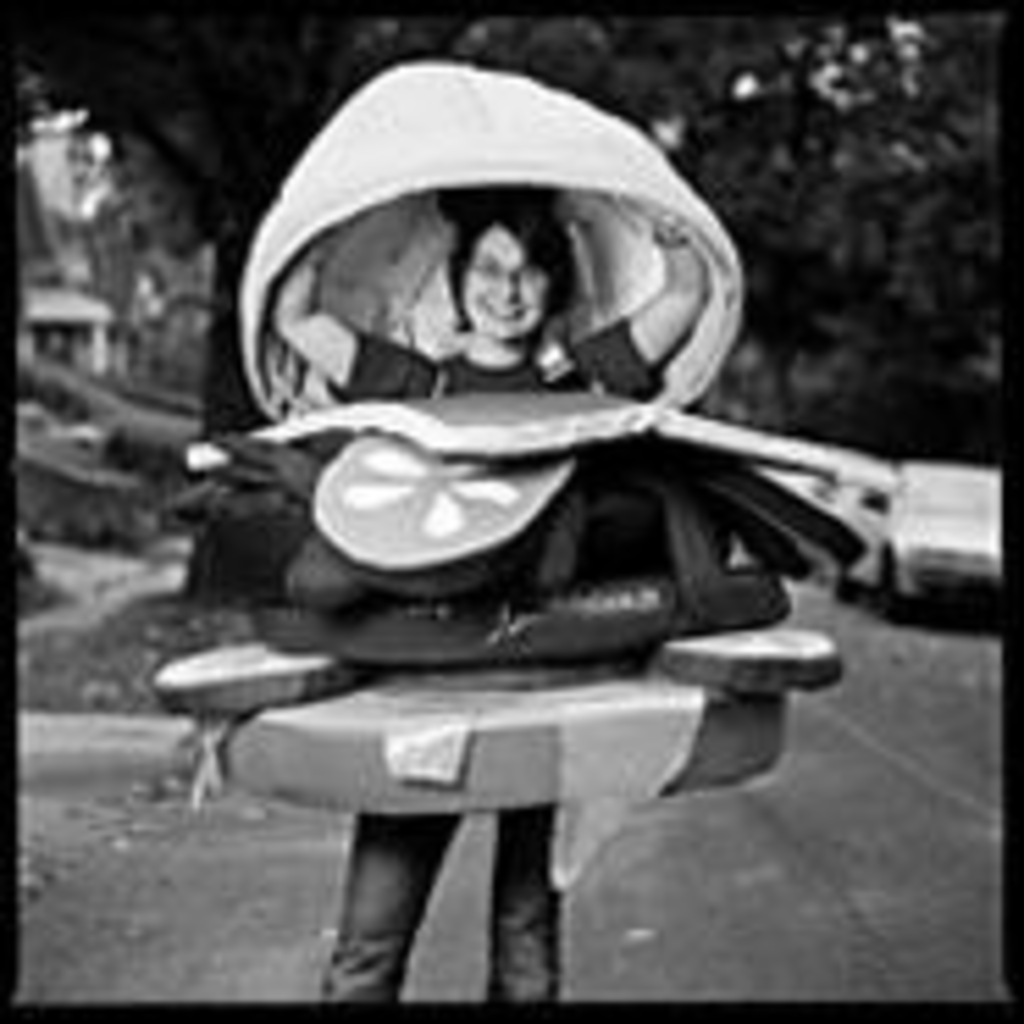 For some workers, casual day is a break from the rigid grooming standards of corporate life. But instead of rolling out of bed 15 minutes later than usual and putting on jeans and sneakers, Nate Kelley decided to go to work at Barnes & Noble in costume: giant, gogglelike sunglasses; a yellow Afro wig; white bell-bottom pants with vertical blue stripes; platform shoes and a weird-ass fringed vest.

“I worked two hours in the music department, and nobody said anything,” recalls the former clerk, now a cubicle dweller. “I helped elderly suburban couples, and they just acted like la la la. But I eventually got in trouble. Somebody called the store manager. She walked in the door and saw my outfit, and she looked at me with this expression of horror and betrayal. I said, ‘It’s casual day.’ And she said, ‘It’s casual day, not Halloween.'”

But that’s the thing. If we have such a good time wearing costumes on Halloween, why don’t we do it more often?

Because we’re all a bunch of fucking amateurs, that’s why.

I’ve had my fair share of Halloween triumphs. There was the Mary Tyler Moore persona, for which I wore a short A-line dress and tossed my hat in the air while repeatedly yelling, “You’re gonna make it after all!” And the year I was Lydia from Beetlejuice, holding my Handbook for the Recently Deceased, even my best friend did not recognize me under all the white face powder. I was most impressed with myself in 2001, though. That year, I got sick and couldn’t handle the costume I had planned. So I went as Debut-era Björk, which required nothing but matted hair, baggy jeans and a long sweater with sleeves that hung past my hands. As a bonus, I affixed a flat plastic jewel to the skin under my eye to make it look as though a giant teardrop sat suspended on my face. Though I really just looked like a sick person, I received numerous compliments on what was then my most recent album.

Callyann Casteel is not. She doesn’t dabble in celebrity imitation. And she doesn’t do this just for Halloween. She’s, well, don’t take this the wrong way, but she’s a giant hamburger. With pickles, lettuce and tomatoes.

Casteel makes these hamburger costumes herself. There are six of them, and they are most effective en masse, when Casteel dresses up friends and sends them off into the world to mingle, a veritable army of walking meat patties.

They’ve made numerous appearances at art openings, and they’ve been known to dance in the rain at Loose Park.

When her hamburger craze took hold, Casteel had never sewn anything, and she certainly hadn’t worked her way up to anthropomorphic food items.

But inexplicably, she found herself drawing hamburger scenarios. “My first drawings of them are these factory scenes,” she says. “I didn’t know what I was doing.”

One day, during an art-school critique, she decided that she wanted to make costumes based on the drawings. So she enrolled in a sewing class, drew her own patterns — shapes outlined on newspaper that said things like “bun” and “pickle” — and got to work.

“Originally, the hamburgers were supposed to be blind,” she says. “You wouldn’t be able to see out of them at all. I wanted them to be these really awkward things pingponging around, bumping into each other.”

When Casteel put on the first blind hamburger costume, she realized how impractical that was. It became clear that she would have a hell of a time getting people to wear the other five costumes, bulky and debilitating as they were.

So the hamburgers can see, as can the strange calculator costumes that go with them. The calculators hold mallets. They’re supposed to beat the hamburgers into submission. Casteel loves to stand back and watch what happens when people wear her costumes.

She’s now developing a “blob” costume, a big, amorphous suit. Because she conceived this costume specifically to enact death scenes, it has a lever inside it that, when pulled, causes a piece of red fabric to balloon out like blood.

Casteel fantasizes about running down the sidewalk in front of Broadway Café in her blob costume. She also envisions herself wearing it to office-building cafeterias at lunchtime, and she hopes to borrow somebody’s dog — how funny would it be to see a death-prone blob walking a dog?

Casteel isn’t someone you’d peg to roam the streets in outlandish outfits. She neither raises ruckuses nor causes commotions. She converses quietly, her tone even and calm, her demeanor friendly and unassuming. She doesn’t clamor for attention. If anything, she avoids it. Maybe that’s where the costumes come in. These hamburgers, blobs and calculators draw attention to her handiwork while allowing Casteel to remain hidden.

“When I was in my blob costume the other day, people I assumed would know who I was had no idea,” she says. “These characters are not supposed to be human at all. Even my voice coming out breaks that illusion.”

While Casteel continues to test and push her own comfort level, Kelley keeps testing the comfort level of others.

“I try to get away with as much as I can in everything,” he admits. What was gratifying about his Barnes & Noble costume experiment was that, by going too far, he had discovered a boundary. He forced someone to tell him no. He was sent home to change, having been informed that the rest of the outfit was fine, but the wig had to go. “That was it,” he says gleefully. “That was the line I couldn’t cross.”

Kelley has also made some fledgling attempts to start a fad he calls “ghastly chic.” It involves combining red and brown eyeshadows around his eyes, stomping on his shirt until it’s wrinkled, then buttoning it incorrectly and messing up his hair. Kelley firmly believes in circling zits with red magic markers — a philosophy of accentuating one’s flaws and “going with it” — and he’s been known to barhop in a Viking helmet with horns. He says his Viking garb went over well in straight bars but poorly in gay bars (where someone rudely used it as a hatrack).

Sadly, though, ghastly chic has yet to take hold. Maybe that’s because people like you and me think Halloween has to end on November 1.