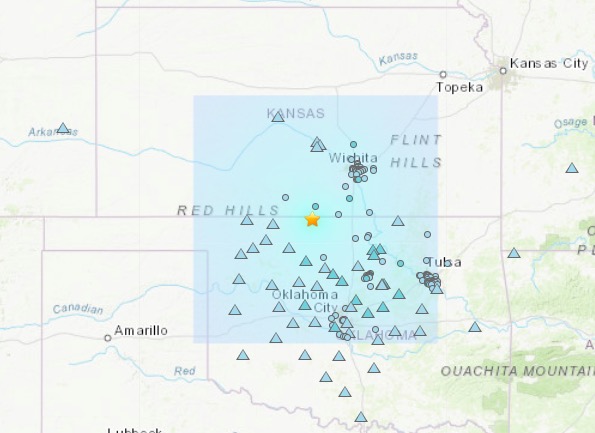 Map of the earthquake’s ShakeMap. // Courtesy of the USGS

At 7:56 this morning a 4.2 magnitude earthquake hit Manchester, OK along the Kansas-Oklahoma state line. It was 4.3 miles deep and is one in a long string of earthquakes to regularly hit the region in recent years.

The earthquake could be felt in Kansas City, 270 miles from the epicenter, as well as much of Kansas. Shaking was reported by Kansas Citians as early as 7:58 a.m. If you missed it, it’s likely that the intensity of the earthquake didn’t reach much of the city.

A 4.2 magnitude earthquake 350 miles north of DFW on the OK/KS border. Shaking felt all the way toward Kansas City, MO. #wfaaweather pic.twitter.com/L4kxo9bLGN

Still, the trend of high magnitude earthquakes in Oklahoma and Kansas has continued to grow since fracking began in the states. From 2014-2017, Oklahoma was the most seismically active of the continuous U.S. During that time period the state had three times more earthquakes than California. Earthquakes have increased since 2013 in Kansas when fracking and wastewater injections began in the state.

Incidents like these—as well as poisoned drinking water, polluted air, animal deaths, and explosions—are why many environmentalists are calling for an end to fracking. Until that happens, earthquakes will get stronger and continue to happen more frequently, and will likely get closer to Kansas City as time goes on.