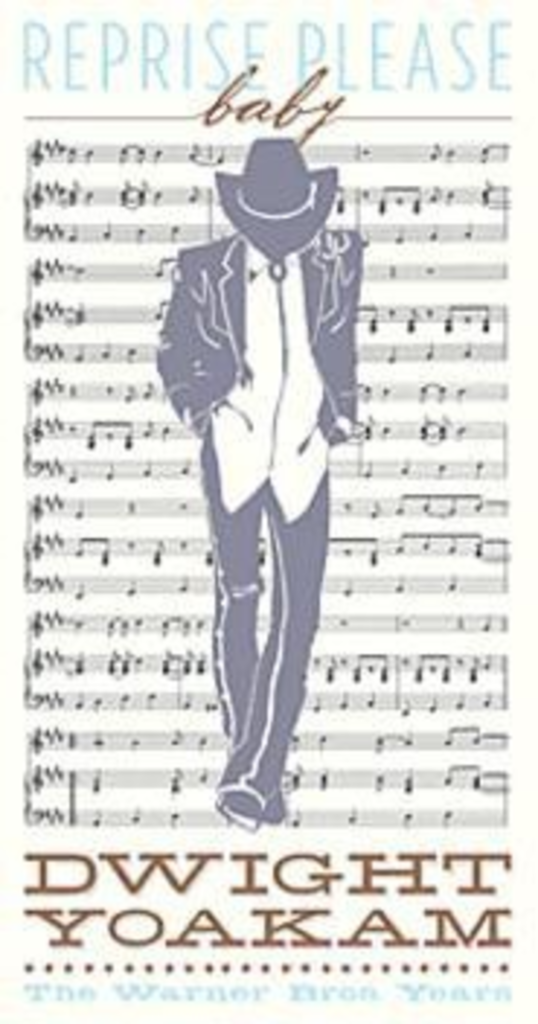 Guitars, Cadillacs and hillbilly music and lonely, lonely streets that I call home. As iconography goes, that list — from the chorus of Dwight Yoakam’s second charting single, all the way back in 1986 — is as handed-down a collection of country signifiers as you could imagine. Throughout his career, Yoakam has remained enthralled by the imagery of country music, from his Western jackets and omnipresent cowboy hat to his teary lyrics, which have been heavy on the wine and beer even though this teetotaler reportedly never touches the stuff. All evidence, it’s now clear, that Yoakam was an actor all along, even before he showed up in Sling Blade and began courting starlets.

Even so, what makes Yoakam interesting is not his fascination with retro imagery and vintage chic, both of which come off primarily as kitsch. Rather, what compels about his music are all the ways he and longtime producer and guitarist Pete Anderson twist country tradition. On Reprise Please, Baby, a four-disc, 87-track overview of Yoakam’s decade-and-a-half-long stint with Warner Brothers, there’s a consistent and distinctive urban feel to even the pair’s twangiest moments. Those lonely, lonely streets wind mainly through L.A., after all, not the Ohio River Valley, where Yoakam grew up. Underscoring the point, Anderson’s country licks have a vicious rock-and-roll bite. And that goes double for the pair’s hurtling, drum-heavy rhythm sections.

Yoakam claims he headed to California in the first place because Nashville found him “too country,” an epithet that apparently followed him until he found refuge in the same punk-affiliated roots-rock scene that was then nurturing bands such as Lone Justice, the Blasters and Los Lobos. So it makes sense that Yoakam’s sporadic successes on country radio (his singles have usually landed outside the Top 20, albeit with plenty of exceptions) came not by looking back but by finding new ways to add rock elements to his music. Which, come to think of it, is exactly the strategy that Yoakam and Anderson’s musical role models, Buck Owens and head Buckaroo Don Rich, had ridden to success a quarter century before.

For that reason, though nearly every track here is a keeper, the least memorable moments always come when Yoakam strips the music down to just guitar and voice (as he does on several acoustic versions of his best-known songs), or when he tries to sing outside his comfort zone (as on a miserably pedestrian version of “Baby Don’t Go” with Sheryl Crow). Die-hard Yoakam fans will covet this boxed set for the 21 previously unreleased recordings that make up its fourth disc, though nothing on it is essential, not even the two swell George Jones covers sung with Kelly Willis or the eight smoking concert tracks. Similarly, his earliest sides, though always entertaining, don’t constitute his best work. His debut chart appearance, an impressive cover of Johnny Horton’s “Honky Tonk Man” in 1986, and his Top 10 hit “Little Ways” from the following year are, like virtually all of his early work, first-rate re-creations of the Bakersfield Sound. But they’re re-creations nonetheless; their chief strengths and weaknesses are precisely the same qualities.

The more Yoakam pursues his gift for synthesis, the better he is. So it makes sense that his most enduring work might well end up being his most recent, collected on the third disc. By joining his expert honky-tonk classicism to the sort of soulful grooves and dramatic arrangements that Elvis Presley favored in his final decade, Yoakam has truly created, as the title to his 2000 studio album put it, Tomorrow’s Sounds Today. Recent cuts such as “Things Change,” “Fast As You,” “A Thousand Miles from Nowhere” and “Free to Go” are dramatic, emotionally gripping and every bit as rocking and soulful as they are twangy. The combination on these tracks of Anderson’s stinging Telecaster and his boss’ buttery, rust-belt tenor instantly signifies Dwight Yoakam.