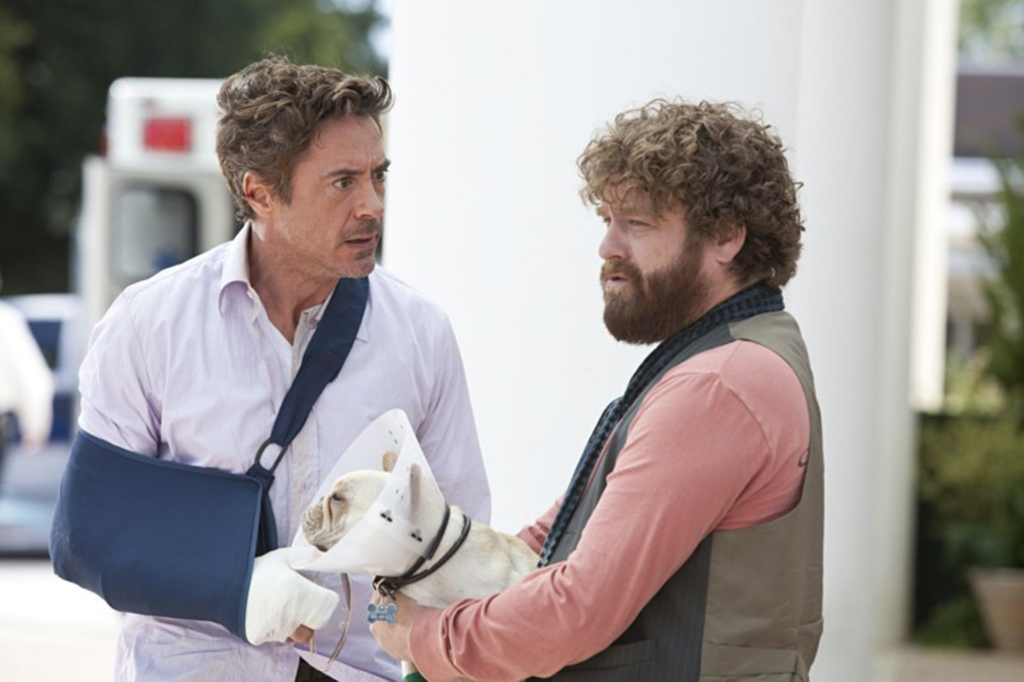 In Due Date, a skinny, scowly and dryly self-referential Robert Downey Jr. meets a chubby, beardy, quasi-autistic Zach Galifianakis boarding a flight from Atlanta to Los Angeles. Downey Jr. plays Peter, an architect with a very pregnant wife (Michelle Monaghan) waiting at home for him; Galifianakis’ Ethan is a would-be movie star headed to Hollywood, with a pocket dog under one arm and a coffee can containing his recently deceased dad’s ashes under the other.

One nonsensical, barely explicated altercation later, both Peter and Ethan are kicked off the plane and are barred from boarding another. Ethan rents a car and offers Peter a cross-country ride, which provides a framework for a series of sketches. As they make their way across the country, this odd couple bickers, smokes a lot of pot, destroys several cars, evades border police, and works out daddy issues in the process.

In interviews to promote Due Date, director Todd Phillips has claimed that the film was intended as a battery-recharging quickie in between the king-making success of The Hangover and the high-pressure assignment of creating a franchise-cementing sequel. As a result, Due Date is fast, lazy and out of control in a manner that’s basically commendable.

Which is not to say it’s cheap: Phillips has a thing for extended, highly destructive car chases that, in their relentless momentum and defiance of real-world consequence, almost qualify as surreal. He also likes to hammer home moments of genuine emotion with sweeping crane shots and expensive source cues. Here, the production’s bloat is at odds with the material’s scrappy charm.

Due Date‘s best running gag revolves around Ethan’s acting ambitions. While Galifianakis’ material (written by a team of screenwriters, including Phillips) isn’t always fresh, it’s hard to imagine another contemporary comic getting this kind of mileage out of wearing a Lilith Fair T-shirt and gently ribbing Two and a Half Men. And unlike Downey and supporting players Jamie Foxx and Danny McBride, you never get the sense that Galifianakis the actor is winking at you from behind the character. His performance is the only thing grounding a film that brashly flouts character development and narrative causality. I don’t know how many scenes Galifianakis can steal in big-budget mainstream comedies before his act becomes codified, losing its veneer of spontaneity and thus its appeal. But for now, his chemistry with Phillips is the filmmaker’s greatest asset.

Due Date, like The Hangover before it, barrels through increasingly fantastic set pieces on its way to a major grownup-man rite of passage, but in this case, the journey is divorced from the destination. Downey’s Peter has no need for big life lessons: He’s kind of an asshole, but an asshole who’s fully committed to his marriage and impending fatherhood, and he’s allowed to stay more or less the same asshole throughout his travails. Due Date‘s reluctance to impose late-inning moral change may just be a function of its lackadaisical construction, but it’s refreshing nonetheless. Blissfully, each disaster is solely for the sake of slapstick.