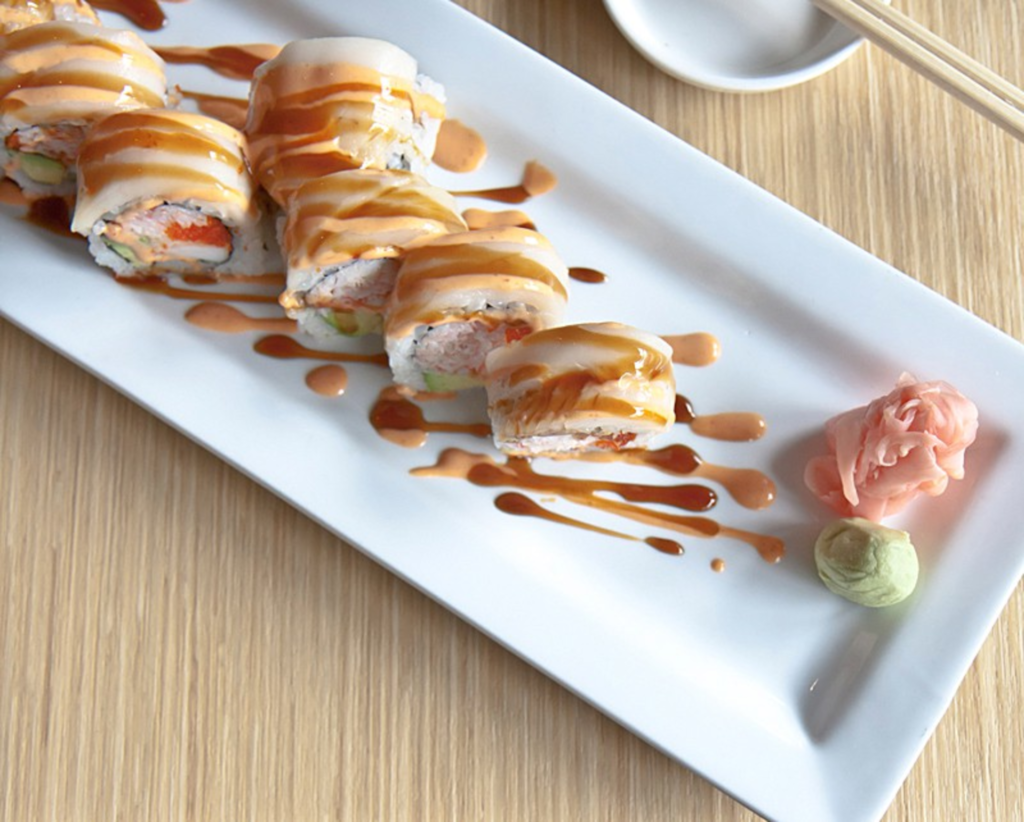 If white wine goes with fish,” George Carlin once asked, “do white grapes go with sushi?”

There aren’t grapes of any variety on the menu at Drunken Fish, the three-month-old boutique sushi bistro in the Power & Light District, but there is a cocktail called a Japanese Viagra Shot made with sake, vodka and ponzu sauce, and topped with a raw quail egg. It sounds ghastly. Give me the grapes.

The cocktail list, like almost everything else at the St. Louis-based Drunken Fish, is outrageously clever. But a little cleverness, like a dash of wasabi, goes a long, long way. There’s a lot to like at this stylish new restaurant, but a few of the more contrived dishes are too clever (and too fried) for their own good.

Yes, I understand that novelty makimono rolls make for a little party on a plate for sushi experimenters and Power & Light tourists and conventioneers. But a fried cheese-steak roll — grilled-beef slices, bell peppers, mushrooms, onion and cream cheese, all tempura-battered, deep-fried and topped with eel sauce — is just silly. What’s next? I propose a tempura-battered brisket slice rolled around Green Dirt Farm cheese and topped with Bryant’s barbecue sauce. It would taste terrible, but it would answer the St. Louis roll on the Drunken Fish menu (tuna, avocado, oshinko and masago), this being the first location outside the city where Drunken Fish originated.

The fried cheese-steak roll wasn’t bad, mind you, especially if you prefer the familiar over the exotic. Not everyone craves pan-fried salmon skin, octopus and eel, even in places closer to an ocean than fresh-catch-challenged Kansas City. For those diners, Drunken Fish offers a BLT roll (exactly what you think it is), California rolls and a fried Philly roll made with salmon, cream cheese and avocado. Oh, and Japanese chicken wings, of course.

I confess that I’m one of those diners who finds little bliss in raw seafood. In the landlocked Midwest particularly, most sushi dishes taste roughly alike to me. Drunken Fish’s novelty-intensive menu suggests that I’m not alone. Besides, how could I embrace the exotic in a place that watches the clock as closely as it watches fishing forecasts? I took a friend for lunch at Drunken Fish one recent day at 1:30 p.m., and the server coolly advised us to order quickly. “The kitchen closes promptly at 2,” he said.

What kind of kitchen “closes promptly” at an hour when some people still want lunch? The manager explained to us that he is required to send his sushi chefs home early so they can rest before the long dinner shift — Drunken Fish serves food quite late. So the restaurant now locks the front door at 2 p.m. — very promptly, indeed. (When the place first opened, the key turned and the closed sign went up at 1:50.)

This off-putting rigidity isn’t the only eccentricity about Drunken Fish, where the staff isn’t exactly snappy about picking up the phone. I spent two days trying to call to find out the hours of the restaurant and I consistently got an answering machine.

“The phone has a short ring,” manager Charles Schneider says. “But we do try to answer it.”

But once you’re actually in the dining room — during appropriate hours, of course — the staff is generally very accommodating and attentive, as if they all graduated from a geisha academy. The waitstaff clearly was hired on the basis of good looks first and years of restaurant experience a distant second. The stunning young woman who fussed over Martha and me one night at dinner was a yoga teacher and a dental student. She was a pretty good server, but let’s just say it wasn’t her calling. Not that terrific service has been the hallmark of any sushi restaurant in which I’ve dined. But at least, at Drunken Fish, the servers smile a lot and have beautiful teeth and gums.

I was glad to have strong teeth and gums myself, so I could attempt to negotiate the leathery pork chop that I ordered one afternoon (called — again with the clever — the “judo chop”). It had been marinated in sweet soy, but it still managed to be dry and flavorless. I much preferred the lightly fried tofu starter — “drunken tofu,” what else? — floating in a soupy soy sauce. The best part of that meal, however, was a plate of meaty, sticky teriyaki-glazed chicken wings. At that point, why not go all the way and offer a teriyaki burger?

Drunken Fish is more alluring at night. The dining room achieves a dusky intimacy, thanks to some dramatic lighting. A table facing one of the streetside windows has a surprisingly charming view: gingko trees in full leaf, the dazzling marquee of the AMC theater across the street, a stream of attractive pedestrians walking by. What goes on outside provides a refreshing alternative to suburban venues that look out on vast parking lots.

There’s a lot going on inside, too. And I mean on the plate. A poached lobster tail is served with “wasabi and garlic-infused butter,” which sounds extraordinary but isn’t. There’s barely a hint of pungent wasabi in the silky sauce; butter and soy dominate. It’s an artfully arranged dish, but even careful poaching can sometimes make the most succulent lobster taste a little tough. Such was this dish’s fate.

I was much more pleased with a meatless option: a generous bowl of thick, hearty udon noodles in a sexy, soy-based sauce with crunchy zucchini and carrot slivers, napa cabbage and mushrooms.

Those white-toothed servers have been trained to push Drunken Fish’s signature dessert, a strawberry cheesecake makimono roll, as if it were the pastry equivalent of the Second Coming. It doesn’t live up to the hype. A sheath of pink soy paper is wrapped around traditional New York cheesecake and chopped strawberries, dipped in tempura batter and fried, and then loaded up — sundae-style — with chocolate sauce, mixed nuts, powdered sugar and whipped cream. The tastes and textures pile up without melding — or even tasting good. Two forkfuls of this clashing overload, and I was done forever.

“Isn’t it wonderful?” the server asked.

Maybe if I’d been drunk. Just give me a cold grape. And don’t fry it.