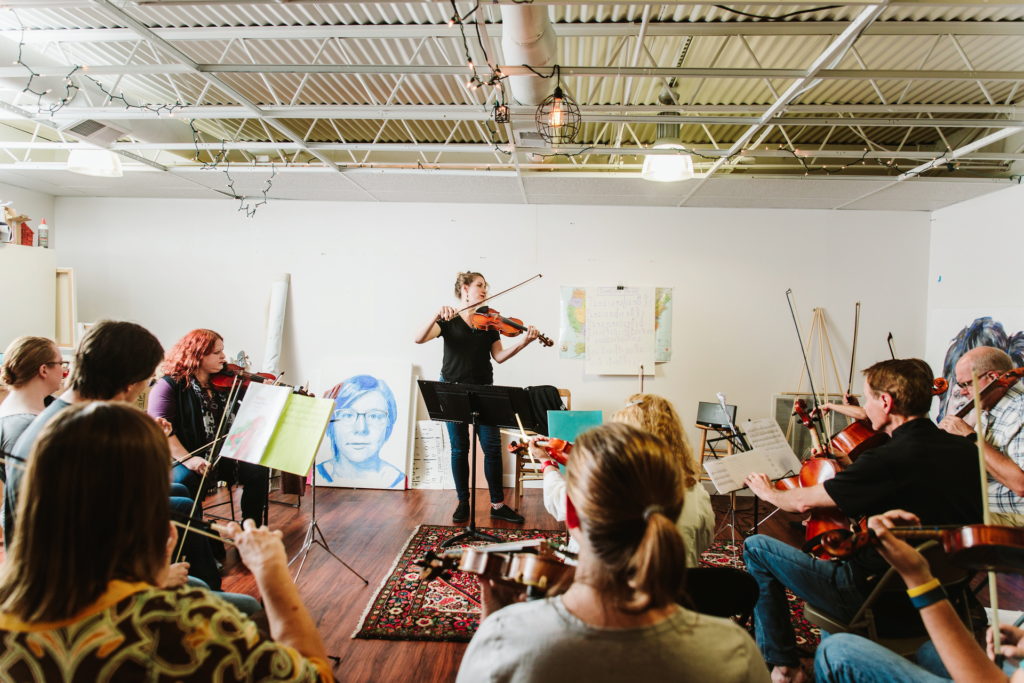 Just after sundown on a chilly fall day, I spot a few people crossing 43rd Avenue in Kansas City, Kansas. I’d arrived in the neighborhood to sit in for a session of Drunken Fiddles, the strings class for adults taught by local musician Laurel Parks. The figures ahead of me in the twilight were carrying violins. I’ve caught the scent of aspiring musician, and it will lead me to the right door.

As I walk up the stairs to the space where Parks lives and works, I’m greeted by the telltale grade-school screech of tuning fiddles. Some of the amateurs are tapping and sawing out notes toward songs they’ve already learned, the most recent run of classes having gotten under way a couple of weeks back. A middle-aged woman asks Parks for help achieving concert pitch. Parks works the violin, and I ask the woman how class is going so far.

“I sound better now than I did when I started,” she tells me, laughing. “Are you going to play tonight?”

Her question catches me off guard. “I’ve never touched a violin before,” I say. “It wouldn’t be pretty.”

“I hadn’t touched one, either, before I took this class,” she replies.

I quickly learn that most of Parks’ students share this in common: About half of them had never played an instrument before they signed up for Drunken Fiddles, and two-thirds had never held a violin. The idea is to provide a nonthreatening environment to try something new.

“I always try to make people feel as welcome as possible,” Parks tells me later, when we catch up over the phone. “If you have to start something from the very beginning as an adult — especially a stringed instrument — it’s not going to sound good. But no one can hear you by yourself, squeaking away. They are just focusing on themselves.” 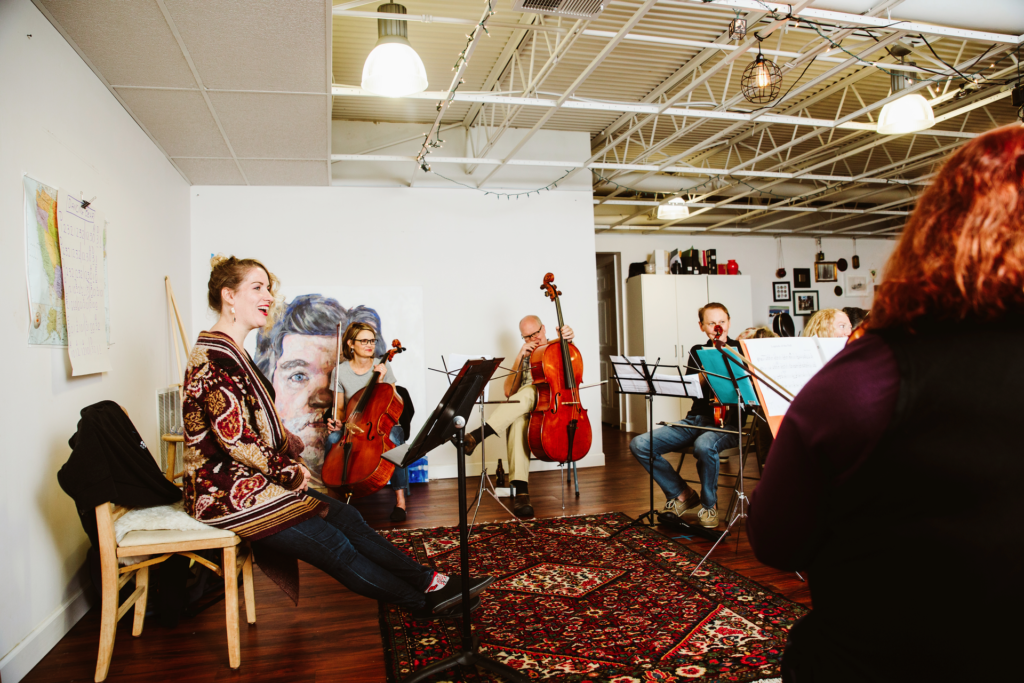 With long, dirty-blond hair and a breezy demeanor, Parks seems the ideal candidate to lead a group of grown-ups down the road of self-discovery (with occasional pit stops for self-loathing) inherent to learning a new skill after the age of 25. Oh, and there’s wine — plenty of wine, along with bottles of Boulevard beer and a tray of cheese and crackers on a table at the back of the room.

“Help yourself,” Parks insists. “And don’t worry about drinking too much. There’s always more.”

I grab a snack and have a seat, listening as Parks’ 10 students talk about their weekend plans, the room illuminated warmly by a strand of lights hung from the ceiling. Then they begin to play. This week’s song is called “Dancing Bear,” a haunting melody that Parks says is perfect for Halloween. She breaks the song down to its most basic parts and teaches it one section at a time, using a chart. The fledglings’ bows bob almost in unison, the sounds gradually weaving together to find the music. 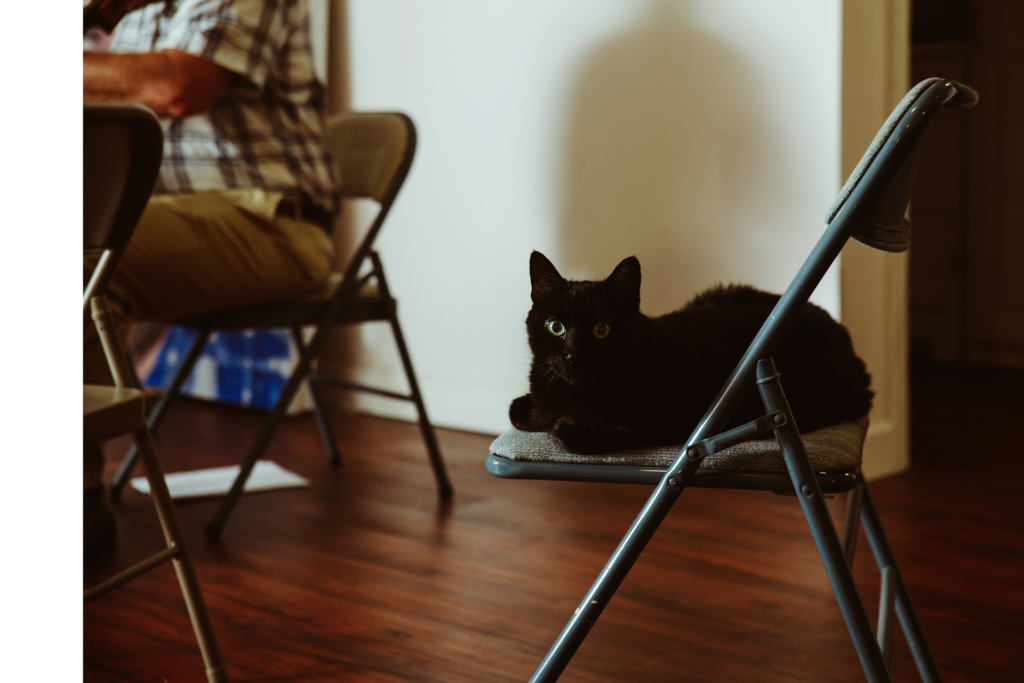 Parks has been leading Drunken Fiddles since 2015, when some of her friends encouraged her to field informal classes. She was initially inspired by a group violin class her dad took when she was a 4-year-old kid in Lincoln, Nebraska.

“He had an old violin and a bow with hardly any hairs on it, and he would practice in the basement,” she tells me. “At that age, I was fascinated and I wanted to play, so they found a teacher for me, and I’ve loved it ever since.”

Parks also gives private lessons to about 40 kids a week and plays in two local bands — Of Tree, with her husband, Benjamin Parks, and the Wires, a project with cellist Sascha Groschang. She’s also played in the Des Moines and St. Joseph symphonies, but she prefers writing her own music — and helping others discover musical ability they either forgot or never knew they had.

One man tonight, for instance, bought a violin on Amazon several years ago and is finally learning how to play it. A married couple comes every week together, he learning violin and she cello. Another man is reigniting his love of music — he enjoys the fiddle because you can dress songs up or down as you choose — but says he’s here as much for the community as anything else. 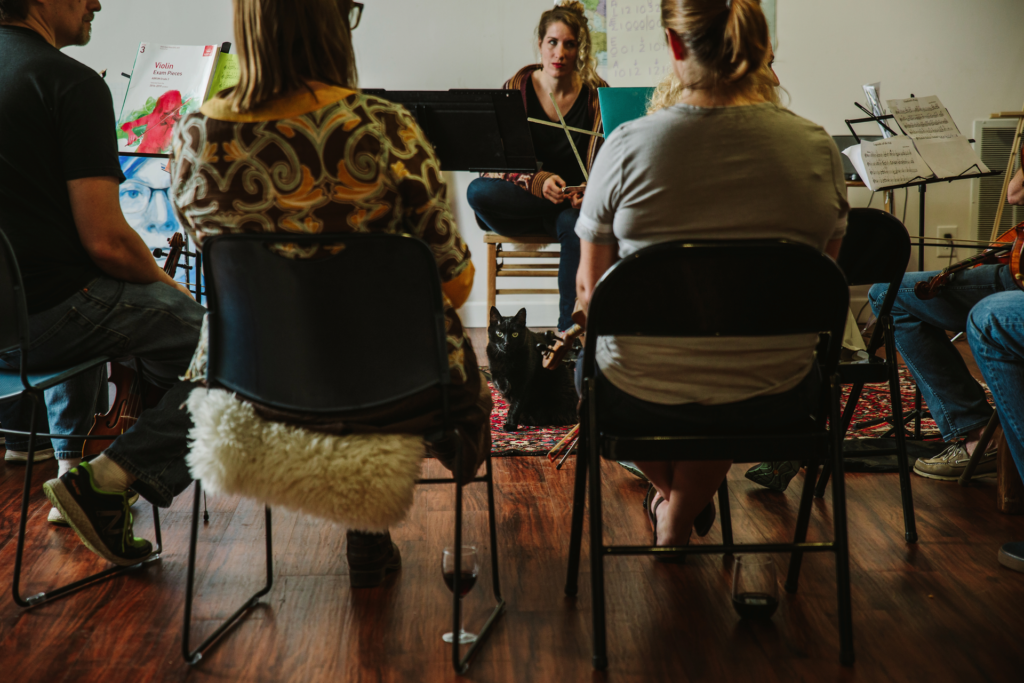 And with a core group of students that returns for every six-week session, along with a rotating cast of newcomers, the sense of community is strong. From where I sit, at the back of the room, watching a bunch of perfectly established men and women struggle like kids toward acquiring a new skill while laughter flows in abundance, I recognize that welcoming vibe immediately. I don’t sense any awkwardness here, and not just because of the wine.

“That’s always interesting, when you get someone who has no experience and then they do it,” Parks says. “It’s cool to watch the transformation. I always tell new people the first two classes are going to be overwhelming, but if you can just stick with it for six weeks you’ll notice you can do something you never thought you’d do.”

The next Drunken Fiddles session begins January 18 and costs $150 per person, or $250 for couples. See facebook.com/drunkinfiddles.