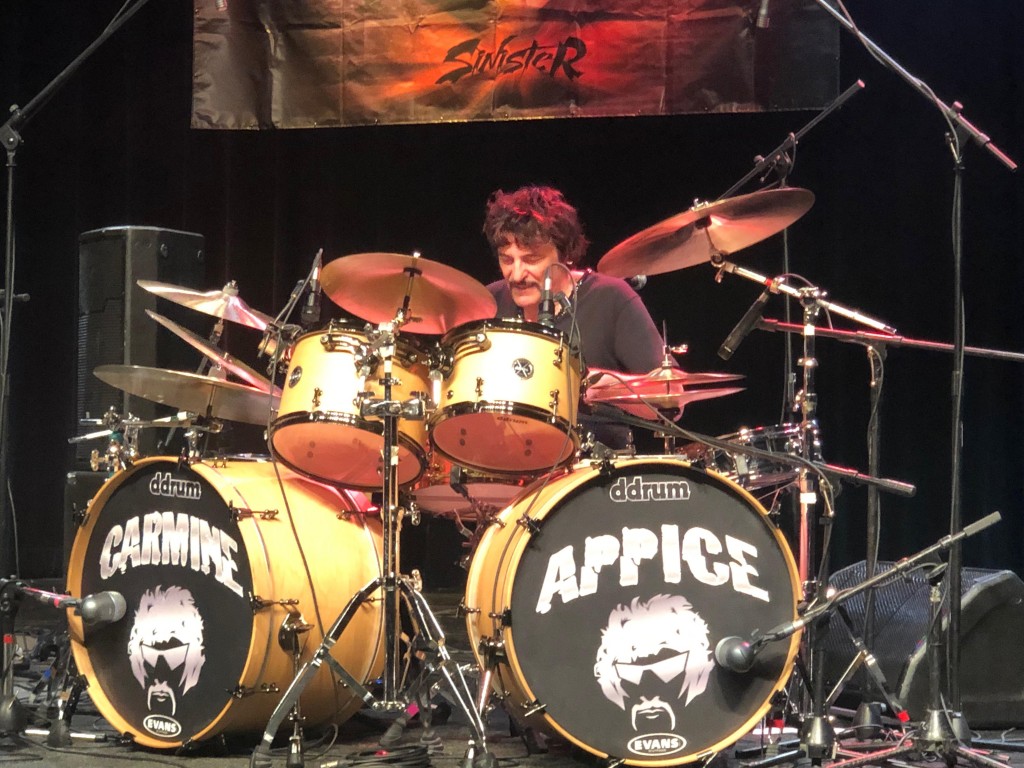 Ten years ago, on May 16, 2010, famed metal vocalist Ronnie James Dio died from cancer. In the intervening decade, there have been myriad tributes to the departed singer, including a hologram tour featuring original members of his band. For the tenth anniversary of his passing, the band Appice – featuring legendary drummers and brother Carmine Appice and Vinny Appice – put together a lockdown tribute to Ronnie James Dio, featuring their song, “Monsters and Heroes,” originally recorded for their 2017 album, Sinister. I spoke with Carmine Appice–who’s drummed for everyone, including Vanilla Fudge, Cactus, Rod Stewart, Jeff Beck, and Ozzy Osbourne–about his relationship with Dio, as well as how the tribute video came to be.

The Pitch: What is your history with Ronnie James Dio?

Carmine Appice: 1977 or 78. He was just joining Rainbow at that time and they were touring with Deep Purple. I was living in LA and they were playing LA in the Rainbow Bar & Grille, I think. I went to the Deep Purple gig and saw them play. I met him back then. We just knew each other casually through that era.

Then, my brother started playing with him with Black Sabbath and I got to know him more. When [Vinny] started playing with Dio, I got to really know him, because Ronnie was in LA at the time and so was I and my brother and my whole family. Ronnie used to come to a lot of our family occasions and vice-versa. He didn’t have any family there, but he’d have parties and I’d see him all over, and my brothers playing with him, so he was like our fourth brother, pretty much, all the way to the end of his life.

When he was in the hospital dying, we were in there with him and went to the funeral. I’ve known him for a long time. When he passed away in 2010, I’d known for like, 30, 32 years.

I had assumed that, because of your work with him and your brother’s work with him, that it was a professional relationship, but I’m very surprised to hear that it was so deep and personal. Was that what made it it’s so important to record this tribute?

Yeah, it just started as a song. Vinny called me and said, “Why don’t we do one of these lockdown videos?” We’ve been calling them the Hollywood Squares. So I said, “Yeah, that’s a good idea. What song?” He said, “Let’s do ‘Monsters and Heroes.’ That’s a good choice since that was the biggest one on our album a couple of years ago.

Then Vinnie called back and said, “We want to do this as a kind of a special thing. It’s Ronnie’s anniversary of his passing in two weeks. Maybe we could do a tribute to Ronnie?” I said, “That’s a great idea,” so the video has the purpose rather than just, “Here’s our video,” like everybody else is doing.

We’re not trying to sell anything. We were just trying to make a point that it’s been 10 years since Ronnie’s passing and do a tribute to his legacy. By doing the interviews and talking about him, and by having more people listening while they read the lyrics, more people are going to have Ronnie James Dio’s ten-year anniversary on their mind.

What brought all of you together–specifically, this group of musicians, in addition to you and your brother?

Well, basically when he called, Vinnie said, “Let’s use our touring band to do this,” because that band has played this song every show since the album came out two years ago. We’ve done a bunch of shows: we did Europe, we’ve done all over the world, really. We got Artie Dylan, our guitarist; James Caputo, the bass player, who also plays with me in Cactus; and Jim Crean, our singer. We contacted them, and they all agreed they’d like to do it, so then we start putting it together.

What was the experience of doing a lockdown video like?

When you do videos, they look very expensive, but with music videos, there’s a lot of sitting around. When there’s scripted kind of stuff, there’s a lot of sitting around. For the “Bark at the Moon,” with Ozzy, there was a lot of sitting around. It took six hours to put his makeup on – you have to become the werewolf – and it gets boring, but this video was probably the easiest video, because I taped it in my house, here in the drum room with high ceilings and a couple of mattresses next to it, because we’re actually getting ready to move to Florida and had the mattresses next to my kit because it was a utility room. I filmed it directly on my iPhone, with the audio and the video in one take.

It sounds really good. I’m surprised that was recorded on an iPhone.

Well, just my part was on the iPhone. I’m the only one that didn’t have a studio. Everyone else had a little studio. Artie Dylan has a full studio where he edited and mixed the audio sound. He took my sound off the video, put it into his Pro Tools, and it sounds better. The track has a lot of energy and the way he edited, the video kept the energy of the track moving because the video wasn’t just a camera on each guy. He’s changed the scenes and the screen. Sometimes, it’d be five people on screen and then three, then two, to one, depending on the accents of the song and what was going on.

If I was doing a fill, that would be on me and Vinnie, then you see me doing the fills, and he points over to me and I had to do a fill, then it comes back with the full band. It’s very exciting, and after looking at this, I said, “Man, we should do more promotional videos like this, because they’re easy to do and they’re cheaper.”

We’re doing a new Cactus album and I’m thinking of maybe doing more. For the price of one video for one song, you could probably do five songs. If nothing else from this virus thing, we learned how to do that.

You can find more information about Carmine Appice at his website.