Driven: After you’ve seen summer’s most satisfying movie, you have some catching up to do 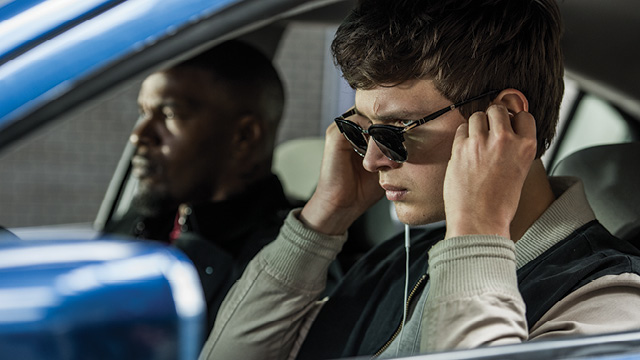 One of the big movie stories this summer has been the unexpected success of writer-director Edgar Wright’s Baby Driver. While fifth movies in the Transformers and Pirates of the Caribbean sagas, and a Tom Cruise–led attempt to launch a new series (the Dark Universe), The Mummy, all failed to make back their blockbuster-size budgets domestically, Wright’s minor-key action-musical more than doubled its modest budget ($34 million) in the United States in less than three weeks. Outside our borders, it’s also a hit.

Ostensibly, Baby Driver is about a young man named Baby (Ansel Elgort), coerced into getaway-driver servitude by an Atlanta crime kingpin (Kevin Spacey). On the eve of the usual last big score, he falls in love with a diner waitress (Lily James). It sounds like the plot of every noir-tinged crime movie since the 1940s, but it is instead a canny reconfiguration of boilerplate elements, made special by the way it taps into our music-saturated culture, using iPods and earbuds to fashion a seductive fantasy world.

The soundtrack of Baby’s deeply interior life is woven into the narrative so thoroughly that it alters his reality (and shapes the viewer’s read of it). It isn’t just the high-speed car chases that seem to be choreographed to his playlists; it’s the background, too. Baby Driver demands repeated viewings — you want to keep mental track of the 70-some pop tunes Wright fetish-welds together, yes, but you also want to be alert to every bit of syncopation underscoring all those visual references. The movie isn’t deep, but it exists in a universe — a non-Marvel, non-franchise universe — inhabited by characters weighted with thematic purpose.

At first look, Baby Driver is the ultimate music video, long after the moment when everybody thought the form had peaked (give or take Beyoncé). Its real achievement, however, is that it works as pure cinema. Wright takes full advantage of the simplest building blocks of sound and vision — using very little CGI — to carry out a concept so simple, it’s surprising that no one else has done it quite this way before.

Some have come close, though. The past 20 years don’t want for crime stories that combine an active camera with bodies in motion, and some of them even use music as a key fuel.

A pulsing techno beat propels Lola (Franka Potente) through the streets of Berlin as she races to find 100,000 Deutsche marks (this was the year before the Euro) in 20 minutes to save a boyfriend who is mixed up with some small-time gangsters. Director Tom Tykwer bends time and takes all kinds of chances, blending live-action and animation, using Polaroid flash-forwards to foretell alternate destinies, and giving Lola more chances to try again, like a video game. Run Lola Run was and remains a fun ride, but it also asks questions about how its characters perceive the world they live in — a theme at the core of the modern-but-anachronistic Baby Driver as well.

Baby Driver would be nothing without its furious kineticism — a past master of which is Sam Raimi. Drag Me to Hell is a horror movie, but it builds tension and surprises you with visual gags in ways that Wright also employs. As in the newer movie, the young protagonist (Alison Lohman) comes from a broken home and is struggling to become an adult. Unfortunately, she’s cursed by a shadowy goat demon, leading to slapstick comedy and unruly action. Worth revisiting after Baby Driver for its wicked sense of humor alone.

Wright has yet to surpass his own visual inventiveness here. This is probably the film that paved the way for Baby Driver more than anything else the Shaun of the Dead director has ever done. Like Run Lola Run, Scott Pilgrim uses the language of video games to tell its story: The title character (Michael Cera) must fight off a legion of ex-boyfriends (and one ex-girlfriend) to win the heart of his new love. But it one-ups Lola by adding thought bubbles, comic book–style wipes, and onscreen “lives” and weapons that materialize as needed. (Scott also plays in a band, so, yeah, there’s music, too.) Wright uses that trickiest of genres — magical realism — and filters it through pop culture; the result proved too radical for audiences seven years ago. Maybe the world is ready for it now that Baby Driver is a hit.

This one is not fast-paced visually. Instead, Nicolas Winding Refn’s L.A.-set mood piece concentrates on the icy calm of its handsome getaway driver (Ryan Gosling). He, too, juices himself with music — in this case, 1980s synth pop — but the pace is slower (even if the scenes are intense). Drive is also a fairy tale of sorts, one that turns dark and drips with menace and style. When Baby Driver hits home video, the double feature programs itself — it’s just a question of whether you watch Drive before Wright’s film or after.

One reaction to our present CGI glut — movies full of unreal action that’s impeccably constructed but impossible to follow — is the resurgence, the past half-decade or so, of the “pure action” movie. These three stylish crime stories rely mostly on in-camera movement and human stunt work for their kicks — which are plentiful. Baby Driver’s stunt coordinator has said that 99 percent of the high-octane stunts in that film are practical. Wright’s choice there follows the lead of these movies (and Mad Max: Fury Road, for that matter), and the results are a huge boon. The worlds may be unreal, but the goings-on in them feel utterly tangible — and, when the movies are their best, so do the stakes.

You bet your ass I’m talking about the Joseph Gordon-Levitt bike-messenger movie! You probably didn’t see this breezy, trashy little gem, but you should: It gets a whole lot of mileage out of showing us its reckless young protagonist throw caution to the wind, weaving in and out of New York traffic like he’s invincible. Director David Koepp also has a nifty trick up his sleeve, visualizing the possible outcomes of riding, swerving or stopping at the precise moment his hero must choose which to do. Did I mention that he’s-everywhere actor Michael Shannon is darkly funny as a dirty cop on his tail? Premium Rush is just the kind of underdog you want to see succeed in a post–Baby Driver time: an entertaining, self-aware flick that does what it promises.

In local filmgoing news, the fifth Arts and Crafts Film and Beer Festival is happening at the Screenland Armour August 25-31, featuring a number of local premieres of new international indie features and made-in-KC shorts, as well as performances by local musicians, special guests and a formidable array of craft beers.

The completely independent film festival has expanded this year to a full week of programming, including a live staged reading of the Coen brothers’ script for Raising Arizona with a local cast on Friday, August 25. Saturday is the award-winning craft beer festival, which benefits KC Pet Project. At press time, the organizers hadn’t yet confirmed every coup; keep an eye on artcraftskc.com.

Isn’t it funny how the movies we see in our formative years continue to shape us well into adulthood? (I still consider Strange Brew to be one of the greatest comedies of all time — seriously, right up there with Some Like It Hot and Duck Soup.) So I bet I’ll see a bunch of you August 19, when the Alamo Drafthouse puts on a 30th-anniversary cast reunion of the teen cult fantasy-comedy The Monster Squad. That’s the one in which a bunch of kids who idolize the Universal stable of monster movies have to grow up real quick and stop those same evildoers (Dracula, the Mummy, Frankenstein’s monster) from plunging the world into darkness. Stars Andre Gower, Ryan Lambert and Ashley Bank are all grown up now, and they’ll be present to welcome the crowd in the theater and participate in a Q&A following the movie. Maybe someone can ask them just what Tom Cruise was thinking.