Drink This Now: the Beach Bum Colada and more Tiki cocktails at the Well 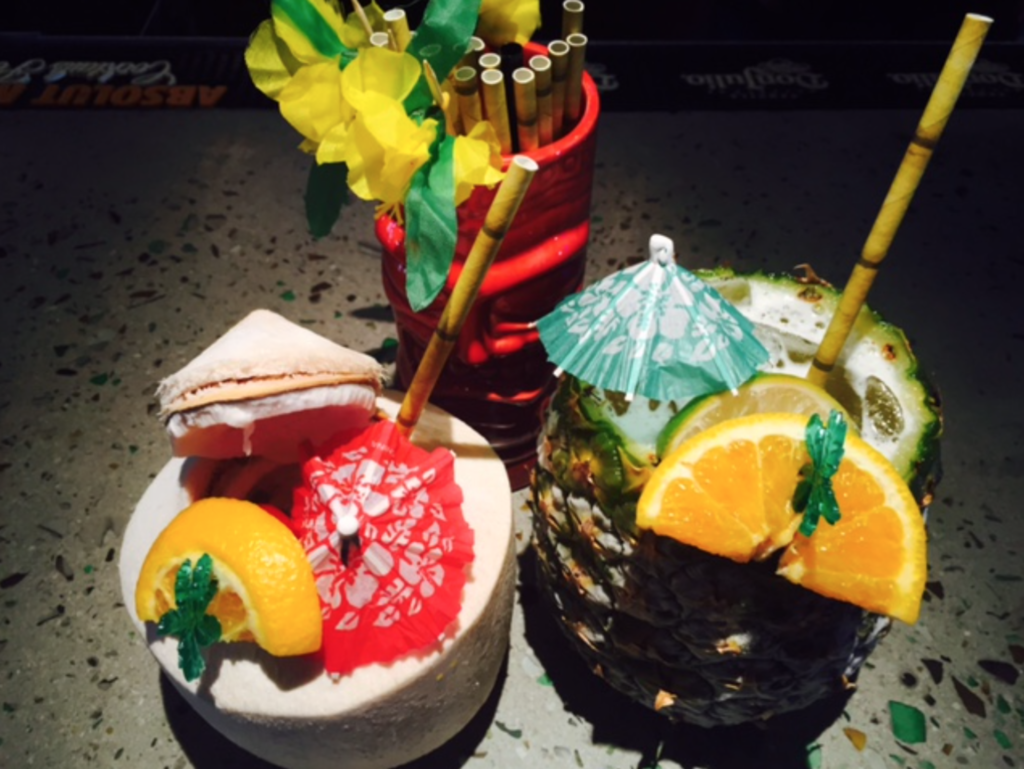 So, tomorrow is technically the last day of summer. Bummer, right? But if you’re not ready to give up the flip-flops just yet, the Well has a list of tropical drinks that might pique your interest. And last week, as the still-summer sun was making me sweat through my long sleeves, I decided to cool off with some of the bar’s specialty Tiki cocktails.

I’ve graduated out of the so-sugary-you-can’t-taste-the-booze category of drink since my wide-eyed college days, but there’s something about sipping from a coconut shell that holds nearly universal appeal. So the Beach Bum Colada, promising a concoction of coconut milk, brown sugar, lime, Captain Morgan and Ancho Reyes Chile Liqueur, was clearly my first choice.

Bartender Lindsey Gfeller plucked an already-cracked coconut shell from the cooler — I was a little disappointed that the machete-hacking part of the action had been cut from my experience — and proceeded to build the colada. The presentation was beautiful: a bamboo straw, umbrella and spear of fruit made for a festive cap. If you taste with your eyes first, I had already translated this to an island vacation. But not being able to view the liquid made the creamy profile of this drink surprising at first — though not unpleasant. The coconut milk with the brown sugar and Ancho Reyes Chile Liqueur gave it an horchata-like effect. I thought it would be hard to top this, but Gfeller suggested the Cane Bay Cooler, served in a whole pineapple shell.

The presentation was similar to the Beach Bum Colada: over-the-top garnishes, celebratory pineapple shell. These drinks are designed to get attention, and heads at the bar turned as Gfeller placed the Cane Bay Cooler in front of me. The ingredients — Cruzan White Rum, St. Germain, pineapple juice and house mint-lime syrup — made for a very sweet cocktai. I stuggled to discern a flavor beyond pineapple and a slight punch of booze. Still, I felt pretty awesome sipping out of an enormous pineapple. The people around me looked jealous. 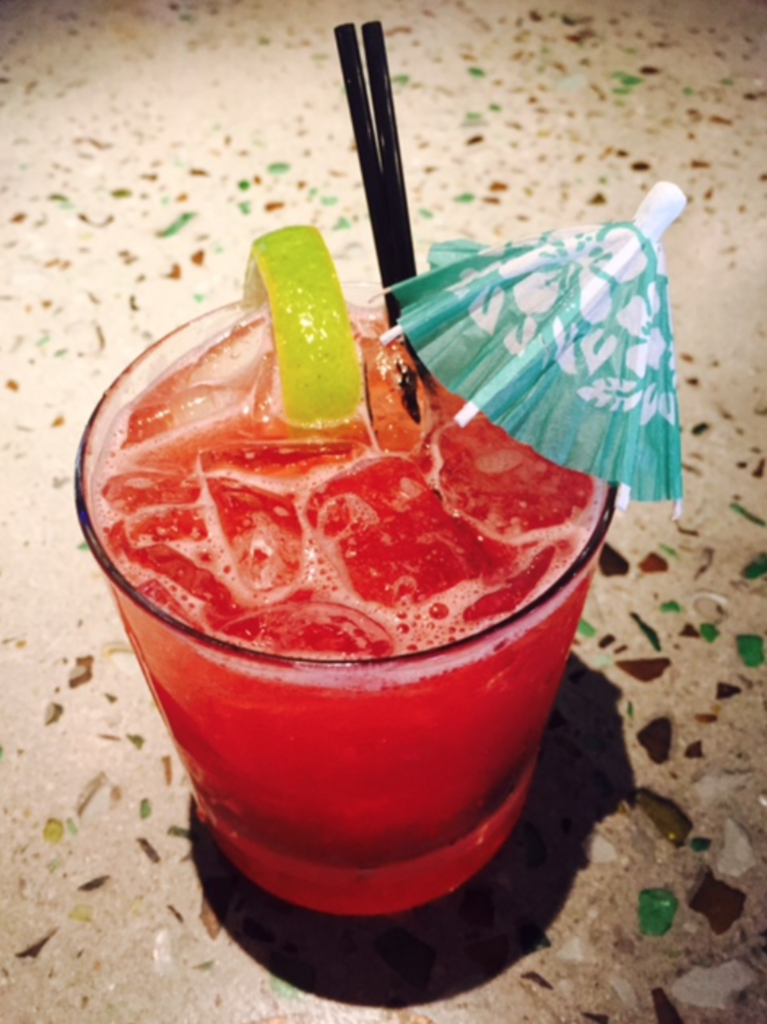 There are two tiki cocktails on this list that aren’t rum-based, and I voted for the Heartless Bastard: Four Roses Bourbon, Tanqueray Rangpur (a Rangpur lime-infused gin), lime, grenadine (just a splash, I was assured) and ginger beer. It was the simplest presentation so far — over ice in a double rocks glass, with a lime wheel and an umbrella — and it kind of looked like Hawaiian Punch. It kind of reminded me of Christmas punch. I wasn’t mad about it. 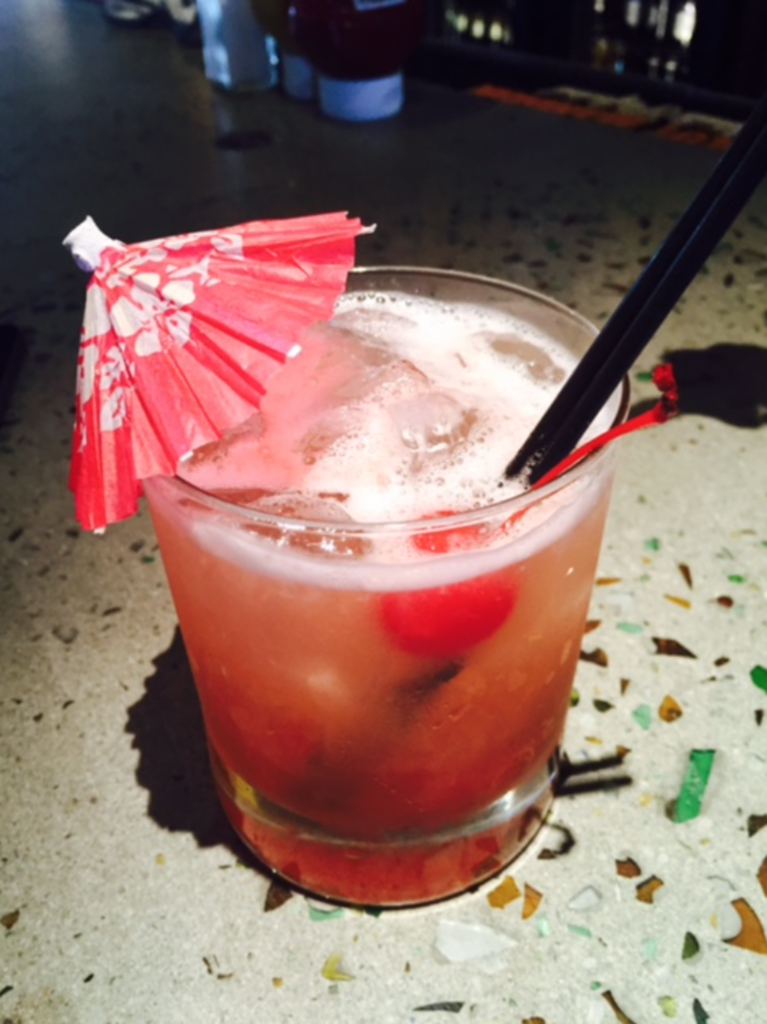 Finally, I landed at the Tiki-Quila Sunset: Tapatio Reposado tequila, spiced coconut water, pineapple, lime, pomegranate. A double-rocks glass and an umbrella again. (“You can’t do tiki without the umbrella,” Gfeller told me.) This drink was the least sweet and the most spicy — the coconut water kicked and the Tapatio came through with a bold swagger. It was the most adult of these cocktails.

Brock Schulte — a partner in Liquid Minded Concepts, which built the tiki drink menu at the Well, and the head bartender at the Rieger Hotel grill & Exchange — argued that they’re all for grown-ups.

“We wanted things that would last a bit longer,” Schulte explained to me. “Even though they include a lot of juice, we wanted to give them good spirits and modifiers, to give the drinks some more flavor. We wanted people to be able to sip longer on these.”

Aside from riffing on classic tiki recipes and incorporating products that already did well at the Well, Schulte added that when the decision was made to utilize coconuts and pineapples as serving ware, it was important to find a way to utilize the entire fruit.

“If I’ve learned anything from Howard [Hanna, chef and co-owner at the Rieger], it’s that there is no reason to waste,” Schulte said. “My goals are always to use the head, tail and everything in between. So we made some cinnamon coconut simple syrup, the spice coconut water, and that’s why there’s such a heavy emphasis on pineapple juice.” He pauses. “And who doesn’t like drinking a cocktail out of a pineapple or a coconut?”

Tiki Tuesday at the Well goes tomorrow, just in time for the end of the season; all tiki cocktails are $2 off. Pro tip: On Thursdays at 6 p.m., the Well’s entire cocktail menu — including tiki drinks — are half off.