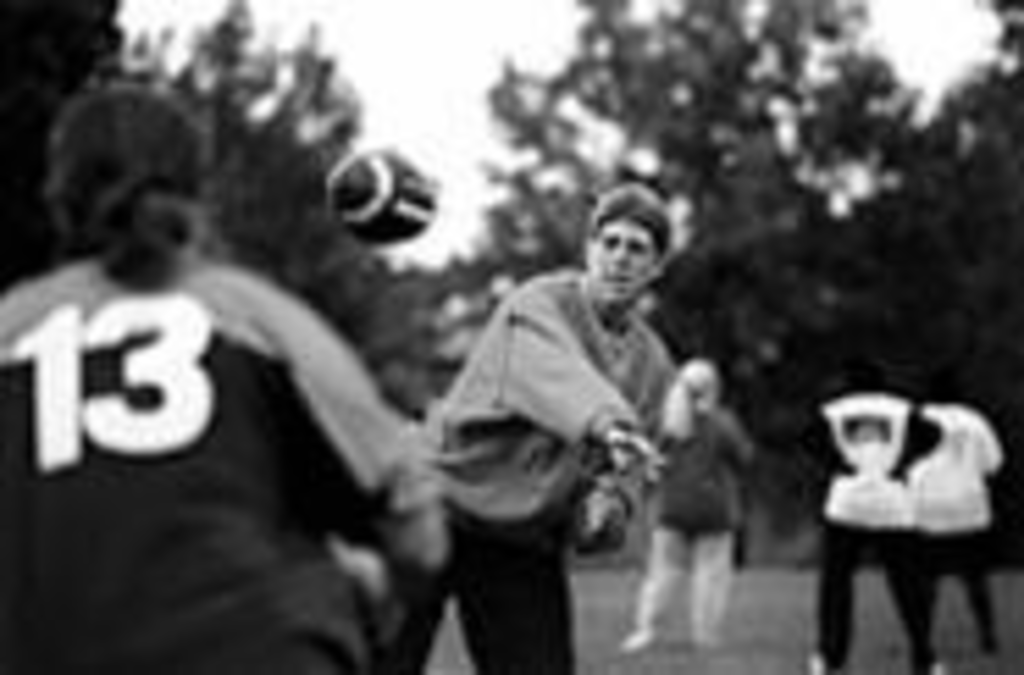 It’s a Saturday night at Wyandotte County Park, and dozens of women run plodding laps around a muddy soccer field. A panting assemblage of out-of-shape gals in jeans and baggy sweats straggles behind.

“You are all making history,” Fields announces as the women trickle in. Some played basketball in high school and college. Others play softball. A few play rugby.

“Get your recipes together,” Fields reminds the women, who will have to peddle team cookbooks between push-ups, practices, full-time jobs and out-of-town games.

Fields passes out packets of fund-raising ideas. The Krunch sells warm-up shirts, helmets and footballs. Sponsorship packages range from $1,000 to $15,000 and include everything from caps and plastic water bottles to “photo opportunities with the team.”

But the Krunch women won’t get paid to play football. If they’re lucky, they may compete on TV when the Football Network begins broadcasting NWFL games-of-the-week in 2004. For now, they’re just happy for a chance to put on pads and pop a can of pent-up whoop-ass.

“I’ve always said, ‘Just give me a chance to hit that quarterback,'” says Theresa Haynes, who has driven 65 miles from Garden City, Missouri, to try out. She solders plumbing parts at the Sioux Chief manufacturing plant in Peculiar for a living, but she spent her childhood playing football with neighborhood boys. They went on to play at F.L. Schlagle High School in Kansas City, Kansas. Now it’s her turn, she says.

“When I think about playing and being able to try out, I get butterflies in my stomach,” adds 29-year-old Tina Gregory, who played flag football on her high-school team in California. “I want to go out there and show people what attitude is.”

For now, Gregory sells auto parts at a local CarQuest store. But her dream is to play football in a stadium like Arrowhead, in front of thousands of cheering fans.

During the four-hour tryout, field lights flicker on at twilight. “Hut one! Hut two! Hike!” A woman catches the spiraling pass and runs downfield, smiling broadly, with a stampede close behind.

Center Becky Person is a 42-year-old DST computer programmer whose football career peaked in a powder-puff game at a Nebraska high school. She thought those days were over until her sister saw the tryout notice on the NWFL Web site.

“She told me, ‘Hey, the NWFL is having tryouts. You’ve got to go do it,'” Person says. “I thought I had no chance in hell of making the team.”

But every woman who shows up for the Krunch’s three tryouts automatically makes the team. In February, Fields says, she’ll whittle the squad to 55 players.

Fields, 31, is a full-time youth counselor at the Ozanam Home for Boys. She earns no salary as general manager for the Krunch but is negotiating with the NWFL to buy the franchise for around $35,000. In the late 1980s, Fields says, she broached the idea of a women’s football league to anyone who would listen. “People would double over laughing and say, ‘Who would go watch something as stupid as women’s football?'” she recalls.

Thirty teams now compete in the NWFL, which was founded three years ago by Nashville sports entrepreneur Catherine Masters. The Southwest Michigan Jaguars, an NWFL team near Kalamazoo, Michigan, draws crowds of 2,000 to 3,000 spectators a game. More than 5,000 women’s football fans attended the SupHer Bowl, the NWFL’s championship game, this past July in Pittsburgh.

Now the NFL wants to muscle in on a good thing. In July, NFL officials demanded that the NWFL change its name and that of the SupHer Bowl. At first, Masters agreed to call the title game something else, but after further talks with the NFL about changing her league’s name, she decided in October to trademark the NWFL and SupHer Bowl names. “Negotiations are over,” she says.

“The NFL wants to run women’s football, and they’re not ready to do it yet,” Masters tells the Pitch. “They see our success, and now they want to take our name and do it.”

The NWFL has had its problems, though. The league had to take back one mismanaged team from an owner who didn’t pay vendors and was arrested for drunken driving, says Debby Lening, the NWFL’s vice president of marketing. More controversy ensued this past January when Alissa Wykes, a 215-pound fullback for the Philadelphia Liberty Belles, came out as a lesbian in an article in the now-defunct Sports Illustrated for Women. Masters denounced Wykes’ admission as unprofessional, fearing that corporate sponsors would be offended by football-playing lesbians.

“No one should use [the media] for their personal agenda,” Masters says. “Because of that article, we got hundreds of phone calls. Gay people were saying it was horrible. Straight people were saying it was great. Let’s talk about this girl having the chance to play football, not how many straight girls she’s going to bring out in the locker room.”

The Kansas City Krunch women don’t even have a locker room. Fields now has a coach in Courtney Porter, a Sprint systems engineer who once played for the XFL’s Chicago Enforcers. Kickoff is only six months away, but Fields, who has an MBA from the University of Phoenix, is still putting together business and marketing plans. So far, she’s received six chili con queso recipes for the Kansas City Krunch cookbook. And she still hasn’t lined up a stadium.

“You would think I was trying to book the Olympics,” says Fields, who is talking with administrators at Washington High School in Kansas City, Kansas, and William Chrisman High School in Independence. “Some of them are saying, ‘We don’t think this is a proper sport for our stadium.'”

Susan Barth gazes out over the half-lit soccer field. Barth’s football career was quashed back in 1978, when she was fourteen, after just one season — spent mostly on the bench — playing nose tackle on the boys’ team at her junior high in Wolforth, Texas.

“Those guys all had a shot to go on to the NFL,” recalls Barth, who now works as an electrician. “I just let it go, thinking I’d never get the chance.”

These days, though, Barth imagines SupHer Bowl fame. In her daydreams, the stands are always full. With twenty seconds left, the Kansas City Krunch is down six points. Barth tackles the quarterback, knocks the ball from her hands, snags it in midair and runs like a middle-aged lightning bolt to score a winning touchdown.

Of course, the crowd goes wild.

“I’m living my dream,” says Barth. “I’m telling everyone I’m a professional athlete. I’ve been waiting for this since the eighth grade.”