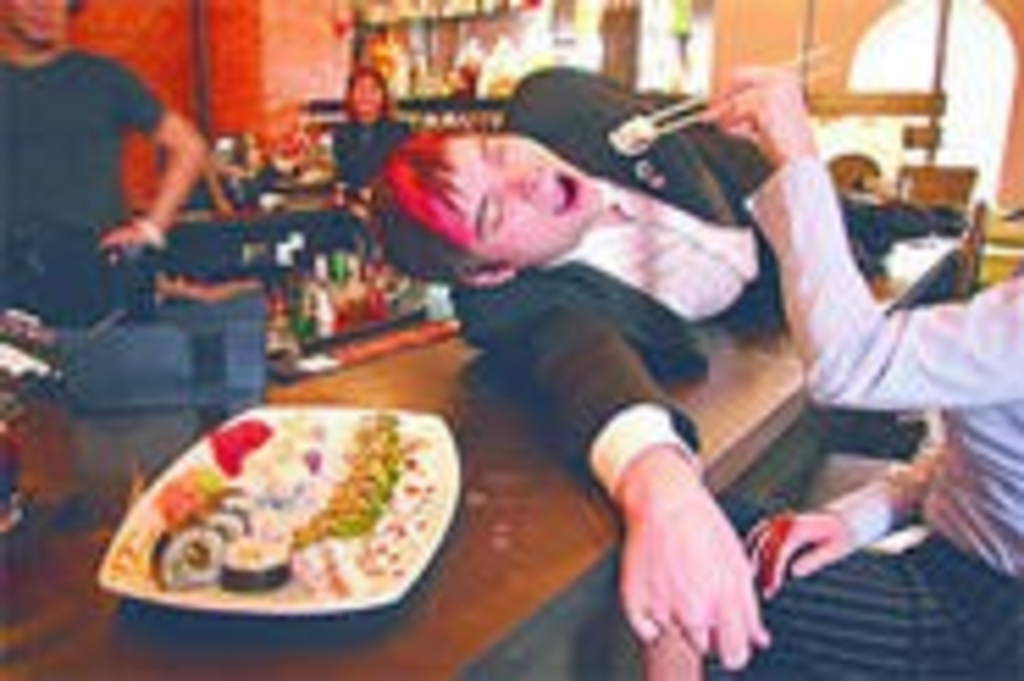 Yeah, I know that the new film version of Dreamgirls — based on the 1981 stage musical — is supposedly a roman à clef inspired by the rise of Diana Ross and the Supremes. What gets lost in the movie’s focus on the chubby vocalist with the powerful voice getting shoved out of the spotlight by the skinny, pretty and telegenic but less talented singer is that in the real offscreen story — just as in real life — style often trumps substance. Talent is a commodity, but a uniquely individual style is something rare because most people don’t have it, don’t want it and are often threatened by it. That goes for performers, artists and, yes, restaurants.

Kansas City has so few restaurants with distinctive style that I had to think about it for a long time to come up with a definitive list. The American? No — it’s glamorous but comfortably square, the dining equivalent of a bouffant hairdo and a Bill Blass gown. Lidia’s has some style, as do Rob Dalzell’s 1924 Main and James Taylor’s Re:Verse. I’d also throw in Bluestem, Le Fou Frog, Café Sebastienne and maybe three or four more that aren’t exactly haute cuisine but have a personal flair.

Add to that list the eccentric, highly entertaining Nara, a self-proclaimed neo-Japanese robata grill that’s been drubbed by some in the humorless foodie contingent who gripe that it’s more about style than serious Japanese cuisine. That may be true, but if you want serious Japanese food, take a flight to Tokyo. If you want something out of the ordinary, Nara scores high for imagination and a sense of joie de vivre.

“But it’s so 1980s,” complained a friend of mine, who thinks that some of Nara’s retro “industrial” décor elements, along with its black-clad servers (and frosty hostesses) and loud dance music evoke the New York downtown cool of the Reagan era. But any kind of cool — past, present or future — is a welcome enough relief from the squaresville chain restaurants dominating the suburbs that I had no problem walking like an Egyptian to a discreet deuce in this dining room.

You have to remember that Nara’s 30-year-old owner, Casey Adams, was probably still watching the Smurfs when the interior style that my friends find so retro was on the cutting edge. Besides, it doesn’t seem to me that the engaging interior, created by 360 Architecture, is inspired by anything from the days of big hair and bad music. It’s a spartan, unfussy dining room during the day, and it’s darker and sexier at night.

At least the room has a style, unlike many of its downtown contemporaries. So does Adams, who had black hair streaked with fire-engine red — the same color combination of the restaurant’s matchbooks and business cards — when I last saw him prowling through the room, introducing himself to customers in a manner that was remote but not unfriendly. My friend Franklin calls him “Sprockets,” after the show hosted by Mike Myers’ solemn existentialist Dieter on Saturday Night Live.

Whatever you call him, Adams — son of local Toyota dealer and TV-commercial star Ray Adams — is just one of the dramatic elements in a restaurant that’s practically a stage set. Let’s not leave out the pots of orchids, the hunky waiters, the sinuously curvy chinaware, and the battery-operated “flickering candles” on the tables.

The menu, created by Terry Barkley, is a pleasant surprise. Despite the restaurant’s name, Nara doesn’t make a big deal of the open robata grill, which is at the rear of the dining room. Even the menu sidelines the eight robata items, giving them a hard-to-find spot on the last page. I’ve tasted three of the robata specialties, and I understand why the joint downplays them. The orange-ginger-spiced yakitori chicken was unremarkable; the lightly charred hotatesai scallops were plump but bland; and the oddball choice — grilled Kansas City Polish wasabi soy sausage poached in Japanese beer — had a light, smoky taste but was strictly a novelty item.

When I dined with Franklin and Shelby, we preferred small-plate appetizers such as the crispy shrimp sheathed in sweet potato and served with a wildly sweet pear sauce, and the wonderful soft spring rolls, stuffed nearly to the bursting point with noodles, asparagus and splinters of carrots, cucumbers, cilantro and basil.

Because I’d raved about Barkley’s Szechwan sirloin chili (“Expedition to Chili,” December 28), Franklin and Shelby both ordered bowls of the meaty stew spiced with black peppercorns, cumin, anise and jalapeño. Franklin, who had thought I was dragging him to a sushi restaurant, was delighted to discover that he could order steak and burgers here. In the latter category, Nara serves up a soy burger; a signature burger made with pork, sirloin and ground chuck; and a terrific Kobe burger topped with chopped wild mushrooms and an addictive onion marmalade that Barkley makes himself, simmering the onions in brown sugar and Kirin beer.

Despite the steaks, burgers and barbecued pulled pork (which sounded a lot better than it tasted, though the mango chili barbecue sauce was nice), Nara is, I suppose, a sushi restaurant. The sushi menu isn’t elaborate: a dozen sashimi choices, seven rolls and a couple of daily specials. The spider roll I ordered one night was made with chewy, tasteless softshell crab — but it sure looked pretty, as do most of the dishes at Nara, where all that style extends right down to the artistically arranged plates.

It wasn’t surprising, then, that desserts were more pretty than substantial. Franklin liked the ginger-pear cheesecake, but there wasn’t enough to share. Shelby was almost too intimidated to touch the three dainty Christopher Elbow chocolates laid out like tiny dark gems on a white porcelain platter. “The presentation’s incredible if you’re, like, a doll,” Shelby said. “But all this for three chocolates? And I’m sorry, they’re not that great.”

But, honey, they looked fabulous, and isn’t that what counts?

When I returned on a busy Saturday night with Bob and Jerry, Nara’s dining room was packed with young, attractive diners enjoying themselves at top volume. “Is it always this noisy?” asked Jerry (who had to repeat the question twice before I heard what he was saying).

Our server that night was the charismatic Eric, a former model, former Café Trocodero waiter and one of the few staffers who didn’t handle water glasses by the rim or call you “Bud” in a butch growl. Not that waiter-ogling Jerry would have minded being called Bud, Mr. Robato or anything else.

“Everyone working here is so attractive,” Jerry said before turning his attention to the slices of lightly seared ruby ahi tuna that I’d ordered as an appetizer. He eyed the plate nervously. Raw meat — tuna, at least — isn’t really Jerry’s thing, but he bravely dipped a tuna slice into the swath of chili-sesame rub and nibbled on it. “It’s very good,” he said. Bob and I thought it was superb.

I decided to eat lightly that night and supped elegantly on a bowl of gingery broth filled with firm pork meatballs and egg noodles, a comforting choice for a cold night. Jerry chose the chili, and Bob settled on a couple of spring rolls, but they were more interested in people-watching than eating. When Adams made his customary appearance at the table, introducing himself to us while staring into the distance, Bob thought he was rude. I interpreted his behavior as performance art.

“I wonder why he opened a restaurant,” Bob said as Casey ventured off, “instead of going to New York to become an actor.”

I later asked chef Terry Barkley the same question. “Casey loves everything Japanese,” Barkley answered. “He loves the food, the culture, the style.”

Has he ever been to Japan?

“No,” Barkley said. “But he has been to Hawaii. That’s where he got the idea for a robata restaurant.”

And his father does, I should point out, sell Toyotas, which are from Japan.

But who gives a damn about where the inspiration comes from? The important thing is that Nara has style, flair and a divine bowl of chili. And if that makes it the hottest new restaurant in town, nothing else matters for now.