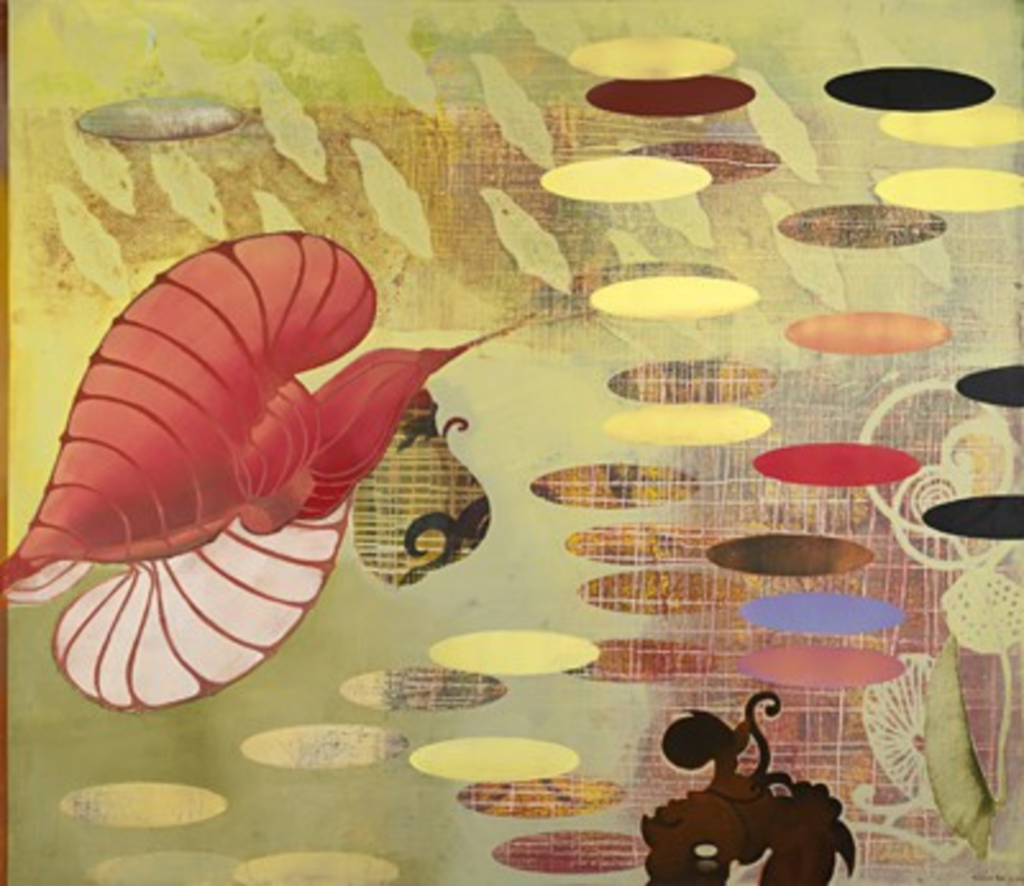 Douglass Freed and Barbara Rogers, who paint in wildly different directions, are unified by their attachment to the decorative: Freed to the drama of the divided canvas and Rogers to the ornamental flourish. These impulses serve the art now on display at Sherry Leedy Contemporary Art — and sometimes undermine it.

Freed’s moody iterations of water, clouds and bites of land dipping into water often veer into the sublime. But that journey is sometimes tripped up by the artist’s insistence on dividing a painting to form diptychs or triptychs or subdividing a single canvas to form two or more sections. For one painting in his exhibition Atmosphere, Color & Light, he has divided the canvas into six units so that the painting’s imagery stutters and stagnates under the weight of the separation. The gimmickry that Freed so freely uses and obviously enjoys often detracts from the composition and diminishes the effect of his usually nimble and atmospheric paintings.

“Discourse” and “Serenity” are two of the most accomplished works. Smallish, at 18 inches by 28 inches and 32 inches by 37 inches, respectively, the paintings are almost monochromatic in their restraint. And restraint informs Freed’s best work. Both of these paintings whisper mystical intimations of a densely foggy morning on a river where indeterminate land banks bind silvery-gray water. “Serenity” suggests the hills that rise out of the rivers of China, and “Discourse” hints at an early morning along the Kaw River. No matter what place these paintings evoke, they are handled with delicacy and assuredness. Each is a diptych, and in “Serenity,” one-third of the painting is simply rendered as the darker version of the other two-thirds of the painting, as if you were looking at that slice through dark sunglasses. Here, the effect of the divided canvases works. In other paintings, such as “Splendid,” in which two side panels painted a contrasting color sandwich the main canvas, the effect is distracting and feels amateurish.

As an “explorer in the terrain of my own psyche” (whatever that means), Tucson, Arizona, painter Barbara Rogers combines her love of decorative patterns and emblems with an admiration for botanicals and imaginary scenes. Working in a painted pastiche of ornament, plant life and collage for her exhibition Walking in Paradise, Rogers dances between artifice and naturalism to guide the viewer through her painterly vision. All six paintings in her exhibition share a similar palette of rusts, yellows, blues and greens, giving them an odd and lackluster similarity. Except for their varying sizes, they tend to look regrettably interchangeable.

In “Ordinary Miracles: Life in the Desert #2,” Rogers’ pods, flowers, drippy paint and other impulses combine to make little sense. As in all of her paintings, the multiple viewpoints, images and ornamental things add up to an experience that’s too unfocused to offer much meaning. Unlike Freed — who, despite some odd canvas choices, clearly seeks to pay homage to the natural world — Rogers seems divided by nature and artifice in a way that dilutes rather than unites. Her works are unmemorable, and the individual elements in the paintings seem generic; I feel that I’ve seen them all before in hundreds of other paintings. None of them resonate with the authenticity that Freed’s paintings, by comparison, ultimately convey.