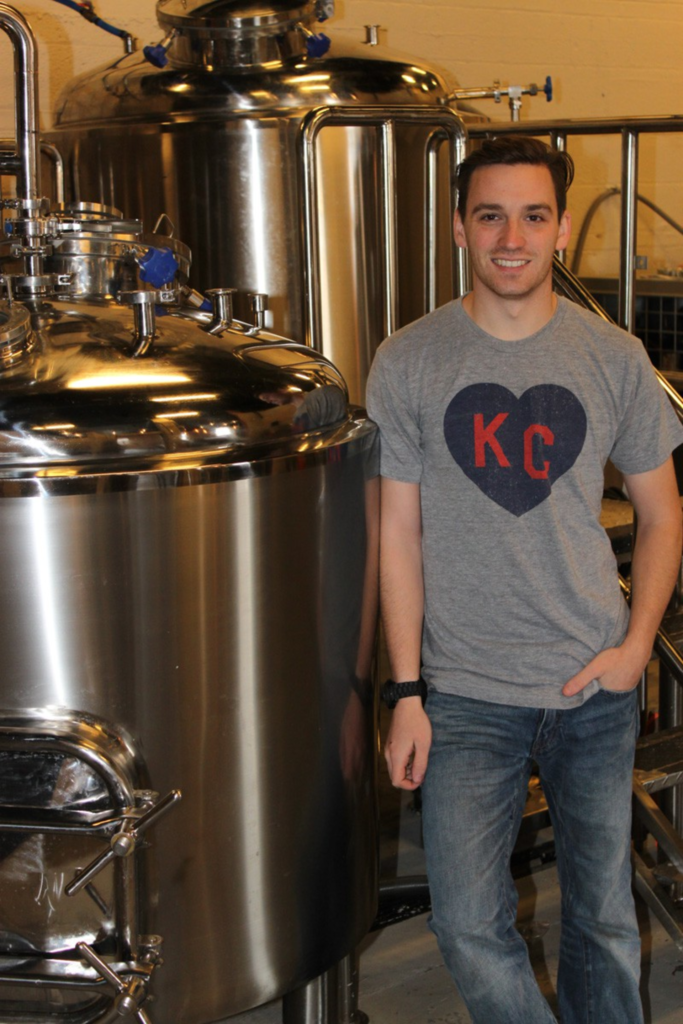 UPDATE: Double Shift’s grand opening has been postponed according to Facebook. The message reads: “Sad news today, we will unfortunately have to put off our opening weekend to a future date due to circumstances beyond our control. We’ll keep everyone updated as we know more. Stick with us and we’ll serve you a beer soon!”

The day I meet him, Aaron Ogilvie has tired eyes — eyes that signal early mornings and late nights for many days on end. The 26-year-old owner of Double Shift Brewing Co. has been readying his space for Saturday’s grand opening at 412 East 18th Street. And he hasn’t taken time away from his day job as a Leawood firefighter.

“I’ve taken some naps on these tables,” Ogilvie admits, motioning toward the picnic tables he bought from Lowe’s to fill out the taproom in the former Craft Gallery & Studio. “Between here and the other job, I’m ready to take a vacation.”

Vacation will have to wait, unless a freshly drawn beer counts. On the mid-June day when Ogilvie shows me around — nearly four months after construction began — numerous tasks remain. A couple of monitors await mounting to the walls above the bar. Steel siding needs to be attached to the front of the bar. And the draught system has to be installed.

“I’ve got a checklist of 80 things that I got to get done in the next two weeks,” Ogilvie tells me. “And I still have to make beer and keg it and all that stuff.”

He’ll need plenty. The taproom holds about 80 people, with seating for 65. A drink rail on the southern wall faces 18th Street, where nearby Grinders and its Crossroads KC concert space lure potential beer drinkers to the neighborhood all summer. Double garage doors open to a west-facing alley, across which is Border Brewing Co. — whose owner, Eric Martens, has offered Ogilvie advice during the build-out.

Once the taps are installed, Double Shift will pour four beers: Run-Around Rye, Heavyweight Double IPA, Summer Session White IPA and Hayloft Saison. A week later, Ogilvie plans to have a pale ale ready to go online. “All of them I’ve done before and feel comfortable with,” he says.

The brewery will start by offering pints for $5 and flights of the four beers for $5 or $6. After the grand opening, Double Shift’s taproom will be open from Thursday through Sunday each week.

Double Shift started brewing in early June with three straight days of production. Supply issues led to a shutdown for a couple of days, but the brewery is back online, and Ogilvie figures that his five-barrel brewhouse has enough capacity to meet demand.

“We’re going to brew another time before we open,” he says. “It won’t be ready by the time we open, but two weeks later it will be. Hopefully, this first run lasts two weeks, and then we’ll be able to get the next stuff on after that.”

Once Double Shift is open, Ogilvie plans to brew a couple of times a week. “I think that’s a pretty good schedule for us,” he says. “It’ll keep me somewhat sane and keep our fermenters full, keep the kegs rotating.”

Adding to Ogilvie’s weariness this spring was the wait for his brewery’s federal license, which stretched to 150 days before a mid-May approval. Meanwhile, UPS and FedEx deliveries didn’t always match up with Ogilvie’s demanding firefighter schedule. But now there’s someone around to sign for packages: Bryan Stewart, who worked at Black Bottle Brewery in Fort Collins, Colorado, has joined Double Shift as assistant brewer, and Ogilvie has hired Meagan Early to manage the taproom. (He’s still in need of servers.)

“I want to make sure we’re running this place good and making the right beer and doing it the way that we want it done, where we can say without a doubt this beer is going to taste good when it’s in a keg,” he says. Eventually, there will be abbey ales, doubles and quads. After that, barrel-aged beers, though there isn’t a lot of space for storing them.

“I want to see how the first weekend goes,” he says. “Hopefully, a lot of people will come.”