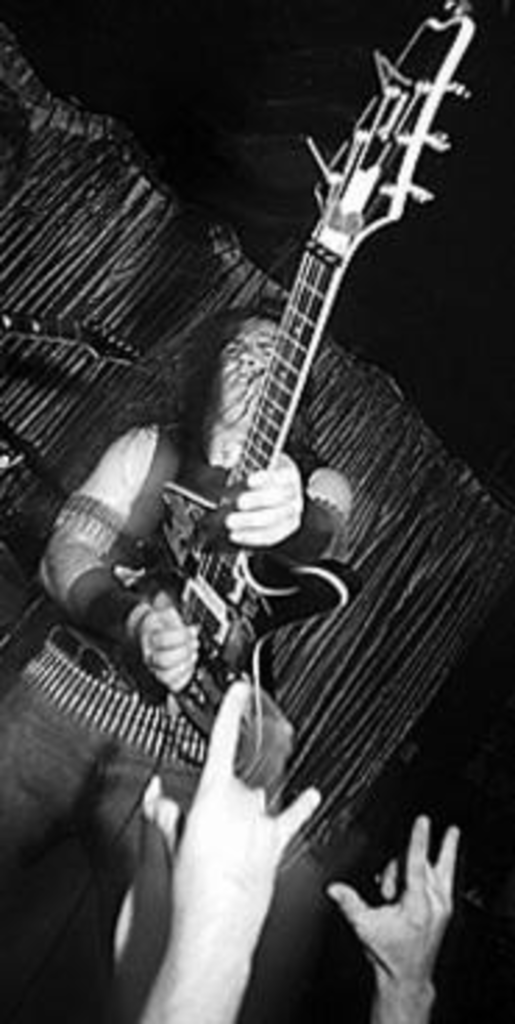 TUE 6/1
Trying to distinguish between gore metal and death metal — two of the most extreme and obnoxious forms of music known to man — requires a surprising degree of insight. Death metal and gore metal are virtually twins. But gore metal is death metal’s messier — OK, grosser — and more disturbed little brother. Those brave enough to venture to the Bottleneck (737 New Hampshire Street, 785-841-5483) on Tuesday will see a textbook example of gore metal when the genre-defining San Francisco band Exhumed brings its splattering, sanguinary sideshow to Lawrence, along with labelmates Cephalic Carnage and Uphill Battle.

Though the current Exhumed lineup no longer includes bassist Bud Burke, known for his projectile vomiting skills, it does spotlight the inhuman endurance demonstrated by Danny Walker, who provides hyperspeed drumming for both Exhumed and Uphill Battle. — D. Kubert

THU 5/27
The Three Friends Restaurant now serves dinner theater with its down-home fare. The new owners of the longtime soul-food staple at 2461 Prospect recently turned their upstairs banquet room into the Three Friends Playhouse, which offers an upscale alternative to the grittier main dining room. On the second floor, they’ve added fireplaces, white linens and centerpieces of fresh flowers. And at 3:30 and 6 p.m. on Thursday, Kansas City native Pamela Jackson performs as busy-body church lady Mama Spanky. In her one-woman stand-up comedy routine, Jackson has been riffing on grandmotherly, Bible-thumping humor for more than ten years. Tickets are $28.50 in advance and $38 at the door (there’s a 10 percent discount for seniors) and include an all-you-can-eat buffet — collard greens, cornbread, black-eyed peas, fried catfish (and baked salmon for the more health-conscious audience members). Amen! Call 816-308-5770 for tickets.— Annie Fischer

THU 5/27
When we saw This Is My Condition open for Lightning Bolt last year, it was hard to tell what was going to happen. This guy, whom we later found out was Craig Comstock, sat down behind a drum kit and started singing and playing guitar. Given the headlining act, we were sure something crazy was going to happen. And after a few normal-by-comparison songs, Comstock laid the guitar down on the snare and went for it, sliding drumsticks up and down the fretboard to create an awesome noise while simultaneously pounding out rhythm on the drums — and singing. See it to believe it at the Eighth Street Tap Room (801 New Hampshire Street in Lawrence) on Thursday, when TIMC plays with Psychic Paramount. Call 785-841-6918 for details. — Michael Vennard