Doom metal, comic books, interplanetary conspiracies: the culty world of They Watch Us From the Moon 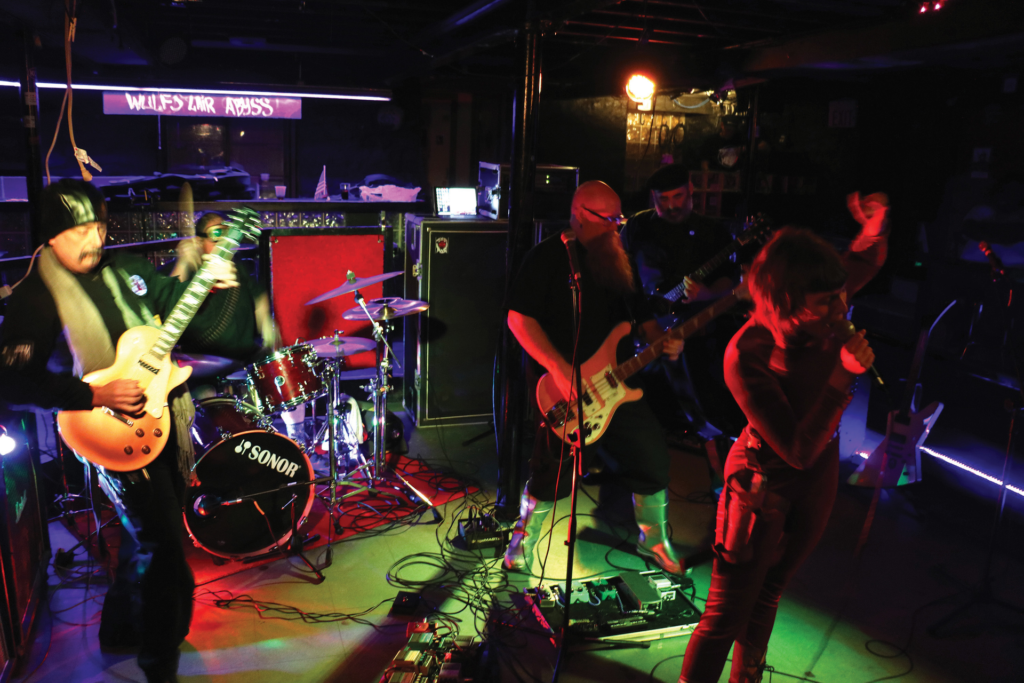 I turn my recorder on, and The General Shane Thirteen — leader and guitarist of doom metal squadron They Watch Us From the Moon — almost immediately commences an attempt to indoctrinate me.

“We were an Earth-bound rock ‘n’ roll band who were invited to play a world rock ‘n’ roll showcase, happening at the Giza Plateau, in front of the pyramids in Egypt,” he says. “And then what happens is, with our sonic resonance, we accidentally activate the secret technology of the pyramids, which is part communications device, part transportation device. The evil on the moon catches wind that [we’ve] activated this ancient technology and zaps us up to the moon, and we’re forced to be court minstrels for the evil emperor of the moon.”

We’re in a room in the back of Atomic Cotton, the Olathe print shop owned and operated by bassist Zakkatron and his wife, Erica. It doubles as They Watch Us From the Moon’s practice space. There are Mondo screen-printed posters for horror movies framed on the walls, but the room is dominated by three huge amp rigs for the dual guitars and bass. When I see TWUFTM play Frank’s North Star Tavern in Lawrence the following night, my ears will ring for two days afterward. The band is punishingly loud.

Everybody’s in costume for our interview: Shane, the General, looks the military part in his beret; drummer Angel Adrian is wearing goggles and a bandolier; guitarist Mad Brad D. in a leather aviator’s helmet with a scarf; bassist Zakkatron looks like a cyborg; and singer Sister Allison Grace is in a one-piece jumpsuit with a laser pistol strapped to her hip. New keyboardist Kaub 10010101 doesn’t yet have an outfit.

“For me, this is a big, fun art project,” Shane says. “I’m doing all of the dumb things I got shot down for in other bands, like, ‘Guys! We should do costumes!’ All the other bands I’ve been in before have been, ‘You’re dumb!’ and all of these idiots were like, ‘Yeah! Costumes! Awesome!’”

Live, TWUFTM is remarkably proficient, which is notable because what I saw at Frank’s was only their third show. Allison, the singer, has never been in a band before, and her musical interests — “I grew up listening to R&B and hip-hop, but never really listened to metal music,” she tells me — fall outside the musical stylings represented by her bandmates’ former groups, among them Truth Cell, Jumbo’s Killcrane, Dark Matter, and Overture.

“We woodshedded for a year and a half [before playing in front of a crowd],” the General says. “And wrote and practiced, and practiced and wrote. We’ve all been in highly operational bands in the past, and Allison has been thrust into this place where it’s, ‘Hey, guess what? You don’t get to fuck up onstage for two years like everybody else did. You gotta hit it now.’ And she has has risen to it.”

Back to the outer-space stuff. Part of the aforementioned art-project mentality extends to a literal art project: TWUFTM intends to issue themed comic books in conjunction with recording releases and live shows. “What answers you don’t get from the comics will be answered at the live shows,” the General proclaims.

“It’s fun writing stuff, too, because the more the story develops, the more we find out, or we’ll go off and kind of brainstorm stuff,” Zakkatron adds. “The more I can dig into what I’m supposed to be doing in the comic book, it changes the way that I write the songs.”

Our conversation gets pretty heady pretty quick. We go beyond United States military space assets and into the realm of global military space assets. I gradually gather that the band’s ideas are steeped in current conspiracy theories about the moon. As artist Tyler Rea goes into deep detail about an upcoming comic, I’m a relatively receptive audience: a copy of Charles E. Sellier’s Mysteries of the Ancient World (“As Seen On TV!”) serves as bathroom reading at my house.

“When he [Shane] mentioned the whole premise of the Giza Plateau, I know what anthropologist friends of mine talk about, what people who are into cymatics talk about, and how they could activate it — the new paradigm about how sound animates particulate matter in geometric patterns within a quantum paradigm,” Rea says.

This enigmatic approach seems to have worked pretty well for the band so far. One of the first public things TWUFTM did was plaster up around Lawrence and KC fliers containing nothing but the words “They Watch Us From the Moon” and a pair of creepy-looking eyes. When I mention the fliers to the band, the General claps his hands and several of the other members appear visibly giddy.

“Mystery is a powerful tool,” the General says. “It worked on you. It’s worked on almost 1,600 followers on Facebook, and we’ve only played two shows and have a couple of Facebook videos.”

The first issue of the comic is due out in time for Christmas; the sample pages Rea shows me are replete with sinister aliens and mysterious imagery. They’ve got a lot of merch, too — three different shirt designs, some patches like the kind the band has on its uniforms. The idea, of course, is is to bring the audience in — to grow the cult.

“They become evangelists of the band,” Rea says. “And they come with us to the moon.”

Doom in the New Year

With Hyborian, Oprhans of Doom, They Watch Us From the Moon, Godzillionaire, and Amenaza