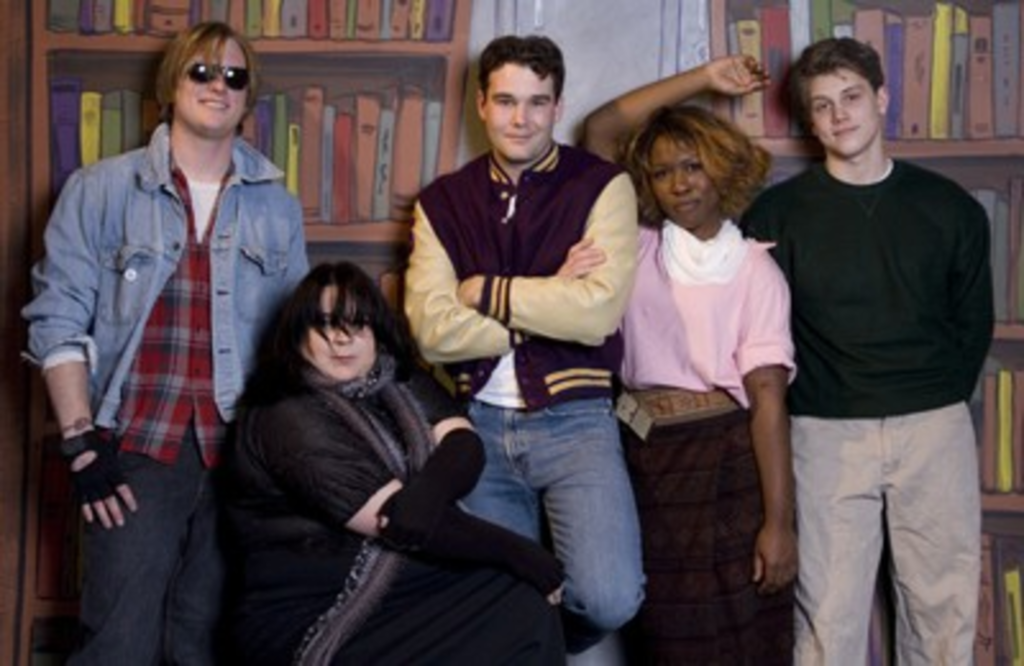 I haven’t seen the movie in 15 years, so I spent much of the Coterie Theatre’s revival of The Breakfast Club marveling at the mere existence of the source material. How often, in popular art, is the adolescent’s need to kick at the world (but still get hugged) expressed so honestly? John Hughes’ script — sensitively adapted for this production by director Ron Megee — has a comedian’s chops, an anthropologist’s insight, a documentarian’s patience and the average kid’s fucked-up feelings. Sure, it’s self-important and tinged with melodrama, but so are high-schoolers. This engaging live production, which runs Monday nights at the Westport Coffee House for the foreseeable future, has a heart that beats with all the earnestness and swearing that made the original so memorable. But here’s a fair warning: If you grew up with it, then watching The Breakfast Club now means having to wonder, If I used to think all grown-ups were assholes, what does that make me now?

Megee and his Late Night Theatre crew spent years staging pansexual burlesques of such movies as Valley of the Dolls and The Bad Seed, titty-twisting the scripts, and smashing the fourth wall so often that you had to thank God it wasn’t load-bearing. Now, in the theater-for-big-kids Coterie At Night series, Megee is adapting rather than parodying, and he’s working with scripts whose titties he’s wise enough not to touch. Instead, he’s staging inventive, well-acted theater that is, in every way, a tribute.

The anarchic Late Night spirit still bursts through on occasion. Megee opens with an on-the-cheap re-creation of the Universal studio globe — a fun sight gag that the opening-night crowd greeted with applause. Later, cresting off one of the show’s emotional highs, he couldn’t resist one more good kick at the fourth wall. The joke — an offhand line from the elegant Chioma Anyanwu as the Molly Ringwald character — won a bigger laugh than it would have if the audience had been getting that kind of thing all along. It served a larger purpose, too. At just the right moment, it yanked viewers out of the story and reminded them: Just like the kids in the play and the movie, audience members are a bunch of strangers all experiencing the same thing at once.

The Breakfast Club concerns five suburban teenagers, of varying social status, suffering through a Saturday detention. (And not any detention. It’s that stare-ahead-and-do-nothing kind, the kind that proves school administrators deserve all the scorn they get here.) At first, the characters seem like mere types, both to us and to one another. But soon, prompted by the tireless ranting of Bender (Matthew Leonard), who attacks every rule of their high-school society, the teens reveal themselves as — well, types. But they understand they’re types, types who know it’s just easier being types.

The appealing Leonard plays Bender as part sage and part prick, a proto-burnout too smart to settle for his lot in life but probably too pissed off to pull himself out of it. His foil is Anyanwu’s Claire: the beautiful rich girl whose conceitedness, he discovers, is ultimately somewhat innocent. She’s adept at the light comedy and even better when Claire’s emotions get battered, especially in her speech about how hard it is to disappoint the clique.

Good as they are, the funniest one is Alex Saxon as Brian, the gentle nerd. His interjections are oddly timed but always right, and his voice quavers movingly.

Tim Ahlenius plays all the adults, most notably Mr. Vernon, the disciplinarian clod who is probably the show’s trickiest role, one stranded between comedy and drama. Vernon is a fool, but he must also be a figure of genuine menace. Ahlenius is a fine comic actor, but his blowups with Bender have little sense of danger or escalation. The scene where Bender mouths off to Vernon again and again, earning another Saturday detention each time, misses the zero-sum tension of two alphas going at it. This Bender is simply a more powerful presence; he could sit down, shut up and still have the upper hand.

For a Coterie production, the staging is low-rent, with sets threatening to collapse and with not much in the way of lighting. If you aren’t in the first couple of rows, the sight lines will likely be terrible. David Kiehl’s sound, though, is excellent, especially a repeated door-slam effect that, hilariously, never quite matches the action onstage.

The production brims with such high energy and good spirits that I doubt these shortcomings will hurt repeat business. In fact, they add to the kids-up-to-no-good-in-the-basement feeling that the material deserves. After the show, the crowd is invited onstage to dance to Simple Minds, scribble on the desks, hang with the cast and feel a part of something bigger. Watching kids bunch and buzz all around the actors, I overheard two teenage girls already on their phones: “Next Monday!” one was exclaiming. “You have to come to detention with me!”