There are performance legends, and then there’s Dolly Parton, who, at 70 years old, can and will outperform anyone else. She doesn’t need constant costume changes or elaborate stage sets with LCD screens.

Parton and her band performed for three and a half hours in front of a crowd of 10,000, and for such a lengthy and relatively unfrilly performance, one might expect a few slow points — yet there were none. The spotlight was simply on Dolly, and no one could have wanted anything more. 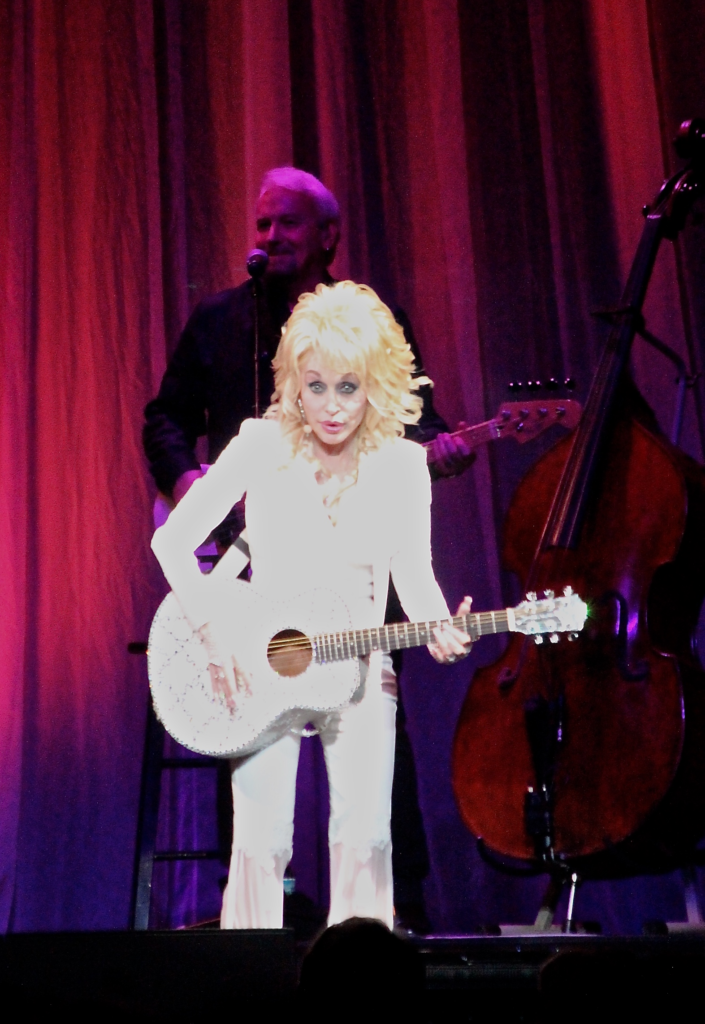 Parton walked on to the stage shortly after 7:40, dressed in a sparkling, tight white pantsuit. She waved to the crowd, explaining with her trademark twang that she was happy to be back in Kansas City. She welcomed the audience, beckoning them to have fun.

“We love it here,” she said. “And it’s been a while. So any time you know a song, please feel free sing along if you know the words. Even if you don’t, sing along anyway – I don’t care what you say. It is your show, and I appreciate you very much. And I appreciate the money you spend on me. Cause you know what I say – I need the money, because it costs a lot to look this cheap.” The audience ate up the joke – vintage Dolly. She wasted no time heading for her hits, playing “Why’d You Come in Here Looking Like That,” followed by another one of her biggest, most classic songs. As with almost all of her songs throughout the evening, she set it up with a laugh. 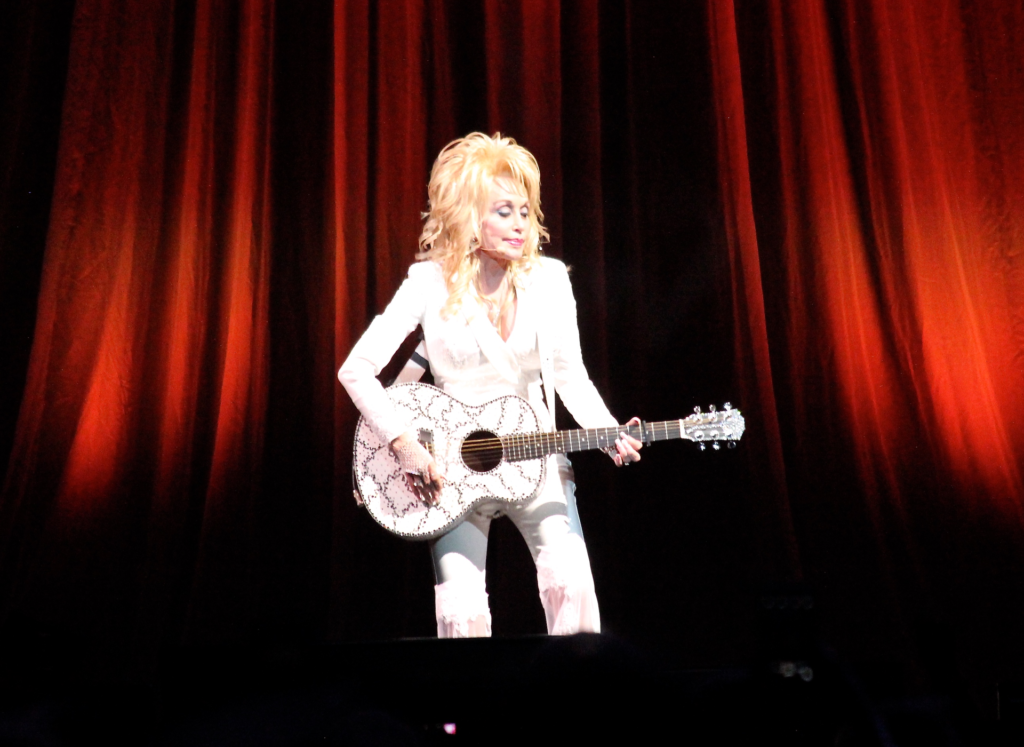 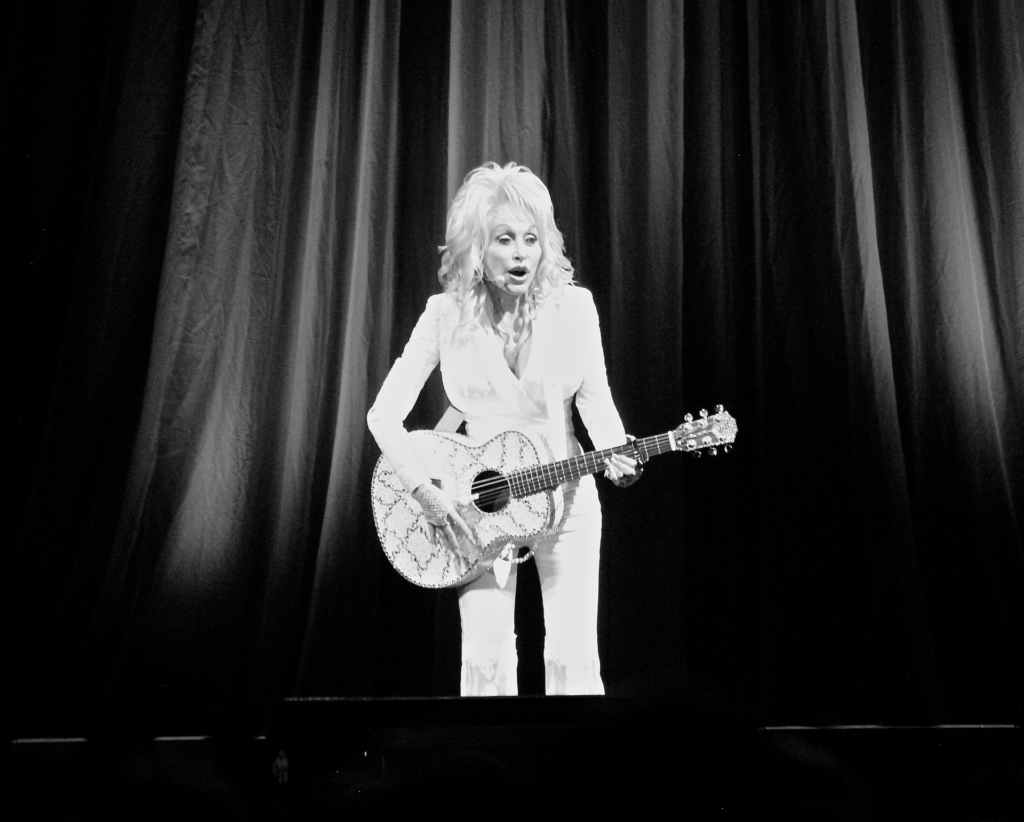 Whether playing “Jolene” or one of her newer songs, “Pure and Simple,” Parton’s voice sounds excellent, both clear and resonant. Her vocal quality and energy level rivals that of fellow septuagenarian superhuman Mick Jagger, with an eagerness to please her audience. The first third of her set was peppered with her classic stories of growing up in the hills of Tennessee. The stories seemed to resonate deeply with the audience. Many of them, despite their familiarity having been told throughout Parton’s career, are surprisingly touching.

“Momma was handy with a needle and thread. Useful with a bunch of scraps or whatever. … [laughs] You know where I’m going with this one. She remade and sewed everything. We were always wearing hand-me-down dresses. The girls didn’t mind, but my brothers didn’t care for it … well, some of them might have. But anyhow, she was really handy with all of that. We all know that my momma made my coat of many colors. I know that she knew that I would probably be made fun of, so she read me that story about Joseph, to help make me feel more special.” Of course, a performance of “Coat of Many Colors” followed, with Parton almost whispering the lines of the story in between choruses. After the song was complete, she joked about how her mother steered her towards her husband.

“‘You ain’t datin’ none of your cousins,;” Dolly said, imitating her mother. “‘So you can forget about that. I don’t want one-eyed, one-horned, blind purple hillbillies. I got enough troubles as it is, and incest is not best. So you best be a lookin’ somewheres else.’ So I went lookin’ somewheres else, and I had to go to Rocky Top to find him!” 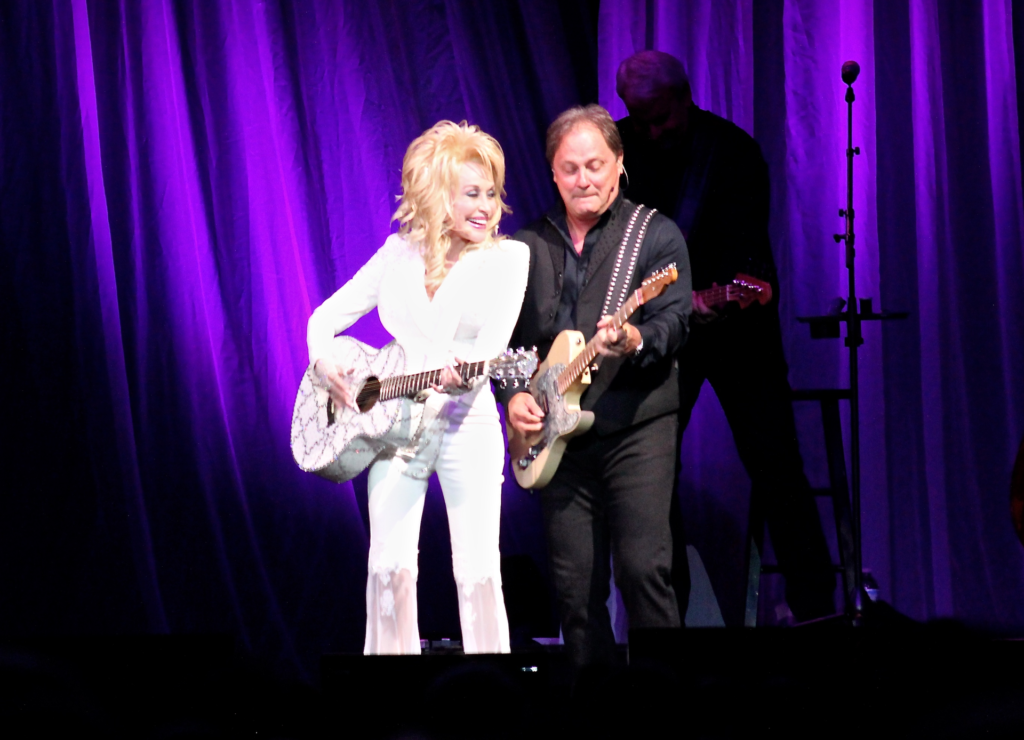 During the performance of “Rocky Top,” she was handed a fiddle for a solo. Parton’s wide-ranging skills are perhaps sometimes easy to forget because of her huge looks and personality, but with rhinestones sparkling on her instrument, she reminded everyone. Then, as if the display on fiddle was not enough, shortly after her solo, she was handled a glittering miniature saxophone.

‘I never leave a rhinestone unturned!” she said and laughed, before leaning down and launching into her cover of Yakety Sax, the bouncy, impressive and note-heavy ditty that is most associated with Benny Hill (or basically any scene in the movie or TV show where chaotic action is sped up for laughs). She joked that she could perform it backwards, leaving the audience guessing, before she just turned around and performed it facing her bandmates. It’s not a new routine, but it’s impossible to resist. More stories through the night followed. 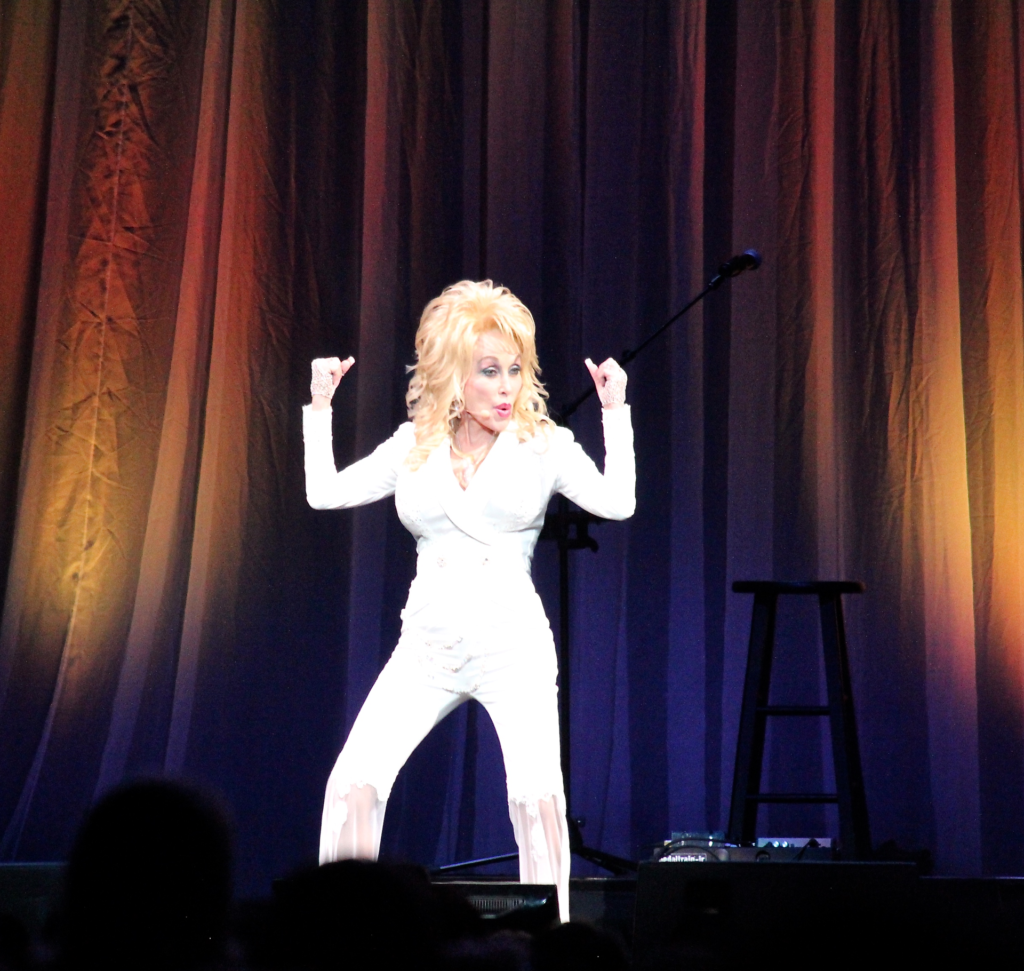 “Did I ever tell ya’ll about how I came up with my look? That over-the-top look? Everything is born out of a natural place. I was certainly not born a natural beauty. I like to enhance it. I’m a self-made woman, and I have the doctor bills to prove it! [audience roars]. When I was a little kid – 8,9,10 years old – every time we’d get a chance to go downtown in the county seat … I would watch this woman that they called the town tramp? Town trollop? Whatever? You know those women that the men all love and the women all hate? Well, I thought she was the prettiest thing I ever seen, I didn’t know anything about that. I thought she was just beautiful, with this pile of yellow hair and bright red lipstick, false eyelashes, high heels, tight clothes. I’d just say ‘she is so pretty!’ and I’d say this to my sisters, and my momma. They’d say, [whispering] ‘Oh, she ain’t nothin’ but trash.‘ I’d said, ‘Well, that’s what I want to be when I grow up.’ You know how I told you we’re making another movie for the ‘Coat of Many Colors’? Guess what part I’m going to play!” 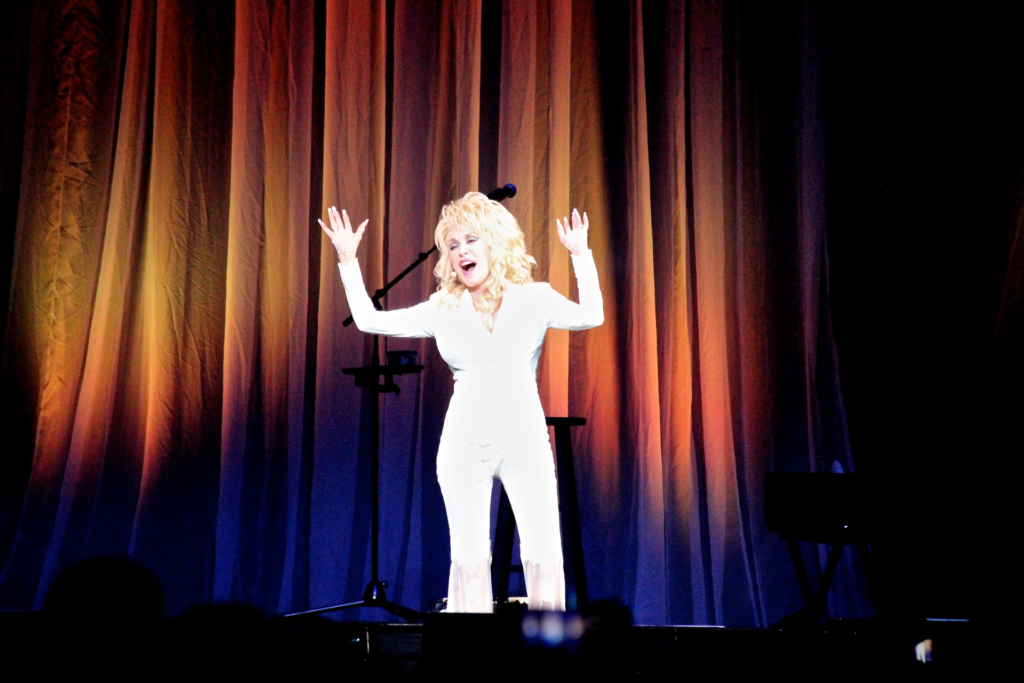 [Aside: this line about her not being a natural beauty is not true whatsoever. Look at photos of a young Dolly. She is drop-dead.]

The show, which included a 30-minute intermission, flew by as if it were just an hour. The setlist on this tour is solid and because the entire performance was so strong highlights would be hard to identify, but particularly memorable were performances of “Two Doors Down,” “I Will Always Love You” and a soul-drenched performance of “Little Sparrow.” Another touching moment was the performance of “These Memories of You,” which Parton sang with her band as a tribute to Linda Ronstadt, with whom Parton recorded the classic album, Trio, with Emmylou Harris [Trio‘s third album, including unreleased tracks from the original recording sessions, is slated for release this fall].

Most apparent throughout the night was the hugeness of the personality of the small, beautiful woman standing onstage. She is remarkable in her ability to entertain. She joked at one point regarding this year’s election, that “I think we’re gonna have to fret real hard for either of ’em. … I’m thinking about running myself. We need a few more boobs in the race, right?” Yes. The world does need at least a little (meaning a lot) more Dolly in it. 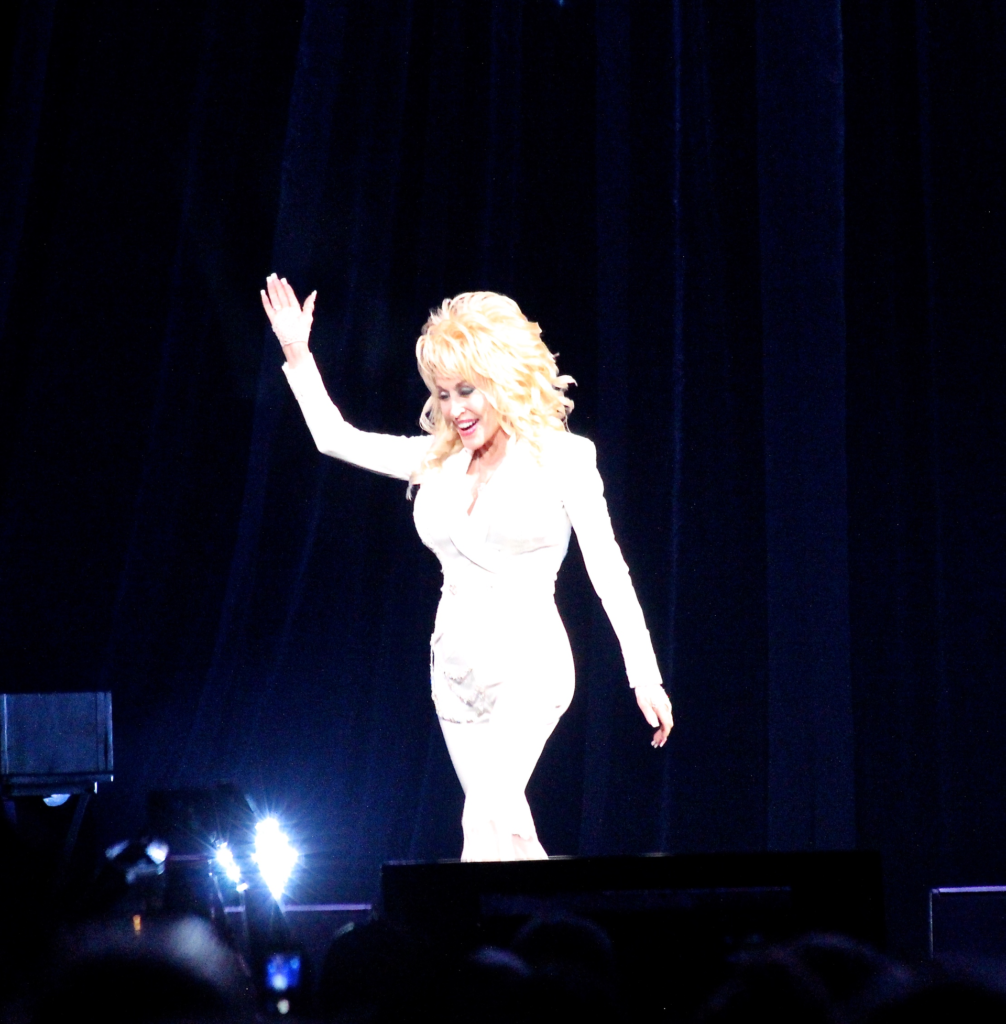 Coat of Many Colors

Banks of the Ohio

The Grass Is Blue

Those Memories of You (Alan O’Bryant)

Do I Ever Cross Your Mind

Islands in the Stream (Bee Gees)

I Will Always Love You