Dolewite sells it on the weekend 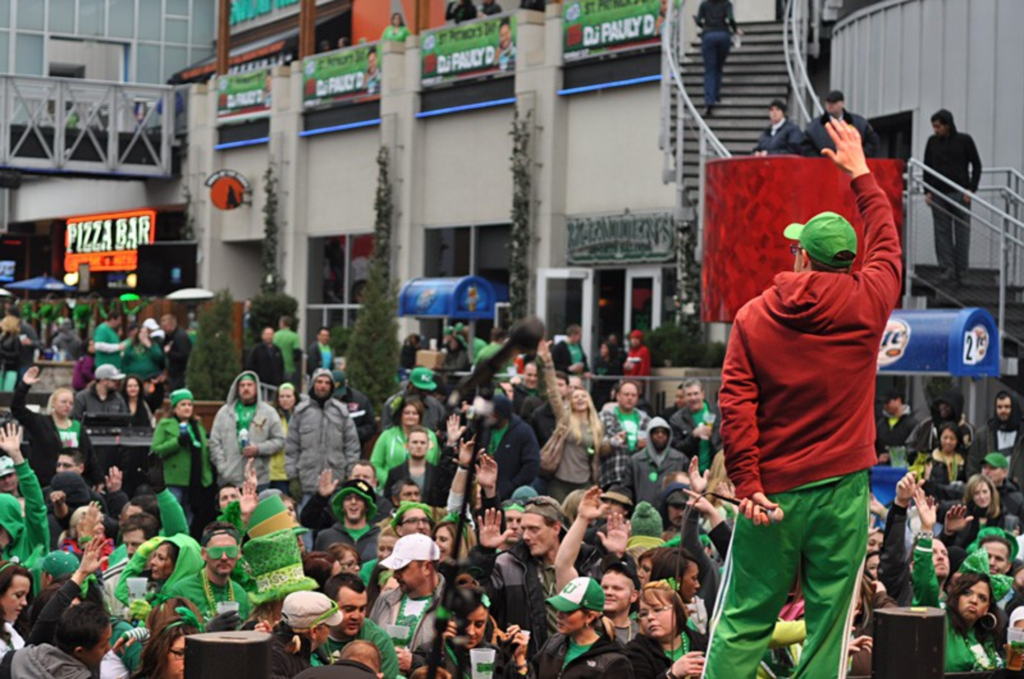 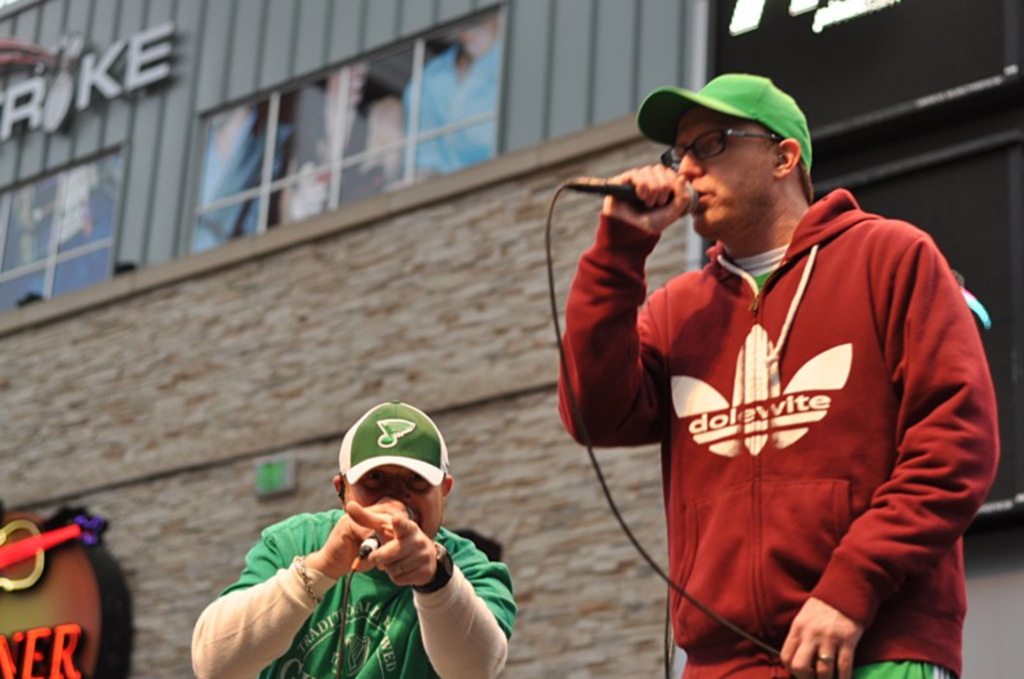 The band was supposed to start at 3 p.m., but headliner Pauly D, the Jersey Shore star turned DJ, has been held up by an air-travel snafu. Dolewite’s members, some of them smoking outside now, don’t mind the delay as much as they do the cold.

“You can see your breath onstage,” one of them says. The drummer from the Transients, an opening band, says his fingers went numb.

“And birds shit, like, all the time on the stage,” says Dolewite’s drummer and unofficial leader, Mike “Sumo” Bransfield.

When they finally take their places and start playing, five of the six bandmates are wearing green track pants (by Adidas, the brand of choice for performance apparel), and the musicians’ energy level shifts from neutral into high gear. They jump into a polished version of Pras’ “Ghetto Supastar,” with backup vocals from Dolewite’s lone woman member, Melissa Burnett.

“There’s no room for fluff today,” Bransfield had warned before the show. By the third number — Young MC’s “Bust a Move” — the space in front of the stage is cramped with dancers. The next song, Digital Underground’s “The Humpty Dance,” sets folks in the mostly white crowd twerking.

In a metro that prides itself on its abundance of local, original music, Dolewite stands apart.

For one thing, the band’s base is St. Joseph, a growing city an hour north, with its own slowly burgeoning music scene. Dolewite plays its home turf only three or four times a year, lead MC Mike Flanagan says. “One of our biggest shows of the year is the night before Thanksgiving,” he says. “We rent out the American Legion Hall and throw a huge party. Hundreds of people.”

For another, it doesn’t write frank lyrics or court indie approval. It doesn’t experiment. Dolewite’s mission is simple: savvy nostalgia. It reworks mid-1990s rap so that Notorious B.I.G. and the Death Row Records catalog are joined by sing-along favorites by Salt-N-Pepa and Sir Mix-a-Lot and the party anthems of House of Pain and Cypress Hill.

“We have a few songs we do mashups on,” says Warren Vandever, the band’s DJ. “Like, we’ll play half of the original, then switch up the instrumental with a radio hit. We try and keep the integrity of the song but change it enough to fit the different crowds we play for.”

“It is other people’s music,” Vandever says with a shrug. “We’re robbin’ ’em enough.”

“We’ve all been playing long enough that we know what we can and can’t do justice to,” Flanagan adds. He’s 38, about the average age in the group, but he looks a decade younger. “We know what translates well to what we do. As long as it’s creating a party, we’re doing our jobs.”

Clubs and promoters have come to rely on that sense of occupation. Over the past year, the band has headlined the Kansas City Zoo’s Jazzoo, the American Royal, and the YMCA of Greater KC’s Challenge Your Fashion fundraiser. Besides those high-profile gigs, Dolewite throws down at least once a month at Fuel in Overland Park, the Landing in
Liberty and the North Kansas City strip-mall bar BrewTop — big-capacity spaces that stay open until 2 or 3 a.m. and want drinkers to linger till last call.

The band members, all of whom work day jobs, say Dolewite is a paid hobby. “Every time we play, it’s fun,” Flanagan says. “It’s our release. We take home a little grocery money.”

Maybe more than a little, depending on the gig. The band members won’t talk figures, but Brian Williams, general manager at the Landing, says booking them is a moneymaker. “Dolewite is a huge shot in the arm every time they play,” he says.

Before a recent show at BrewTop, Bransfield got word that the band was needed while the Michigan-Syracuse Final Four game was still in its first half.

“Before the game is over?” Bransfield asked.

“Yeah, fuck this game,” answered the staffer, a man in a black BrewTop polo shirt. “I want to keep people in here.” He disappeared into a crowd thick with Victoria’s Secret Very Sexy perfume, tight T-shirts and ratted ponytails.

This is Dolewite’s faithful, a suburban-tilting mix eager to recount for one another stories of, say, the private “Gangsters Ball” the band played at an Overland Park country club a few years ago. “On the center of the tables, they had 40s with balloons tied to them,” Bransfield says. “A bunch of white people in track suits. It was crazy.”

“It’s like, what if a chess club joined a rap band? It’s a satirical look,” says Zach Aaron, the group’s production engineer. “The formula for this kind of music is kick drum, bass and a lot of yo yo yos.”

“We say it takes two to three songs to see a skeptic turn,” Vandever says. “First, newbies get that look on their face that says, ‘There’s no way these people are doing this.’ Then, after a little bit, their head starts to bob, and they’ll mouth the hooks.”

Tapping into a desire to hear old songs again isn’t a new strategy for a bar band. But remembering that the 1990s belonged to rap is what’s giving Dolewite an edge over some other local acts right now. For people now in their prime bar-going years (or trying to get back to them), this is the music of their junior and senior years of high school — the sounds of new driver’s licenses and house parties and proms.

“Everyone wants to be familiar with the music,” Flanagan says. “And that’s something a lot of bands don’t address.”