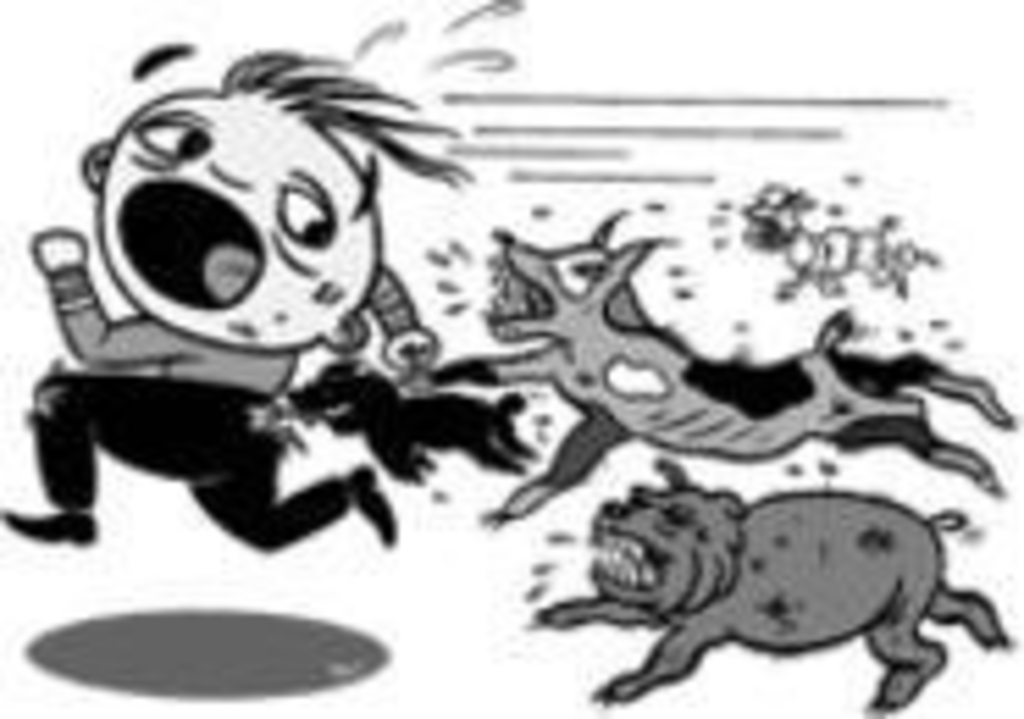 Stories about packs of wild dogs roving around midtown are decades old. Urban legend has them in all breeds and sizes, running side streets at night, rummaging through trash, eating pet rabbits, threatening humans, and fighting with domestic dogs.

But Grant Stauffer has seen dogs roaming his isolated neighborhood north of Linwood Boulevard. He says a pack lives on the 33-acre parcel of land at Linwood and Main, which for years sat quiet and empty, waiting for work to begin on former city councilman Jim Glover’s midtown redevelopment plan.

Stauffer (who is chair of the Jackson County Libertarian Party and a perennial candidate for U.S. Senate in Missouri) is tired of having his two pooches, poodle-mix Lucky and collie Lassie, go crazy when the pack passes his home about once a week. He says about five or six dogs run with the group.

“They sniff and pee and beckon other pet dogs to run with them,” he says. Despite his best efforts to keep his dogs contained with leashes in a fenced yard, Stauffer says, Lucky and Lassie have disappeared with the pack more than once.

And he knows where to find them. When Payless Cashways and Kmart ran into financial difficulties in 1995 and pulled out of Glover’s plan, the project stalled. Protected by a 9-foot chain-link fence, plant and animal life flourished on the 33 acres. “The weeds and grass provided insects and cover for rabbits and mice,” Stauffer says. “There are a number of natural springs in this area, and spring and stormwater is dammed in three retention ponds. There were frogs and toads. When the dogs showed up about two years ago, they had food and water waiting for them.”

At first, a Siberian husky-looking pair took up residence near one of the ponds. “They had about eight puppies, real mongrels,” Stauffer says. “They made their lairs in the slabs of stone and rock that lay in the area. They were very shy and wary and would have nothing to do with people. Several young dogs would stand watch on top of the rocks. When someone cut through the area to get from Main to Gillham or vice versa, the watchdogs would yelp, and all of them would dive into their holes or make for cover.”

At night, the animals burrow under the fence to forage behind the fast-food restaurants along Linwood. They seem to like chicken the best. Lorenzo Moore, manager of Popeye’s Chicken at 23 E. Linwood, says he has noticed at least two strays living on the site. “I see them all the time. They used to come around here, but it was a problem with an employee feeding them. I had him stop that, and they stopped coming to our door. Trash that customers leave on the street tends to keep them around, I think.” Dwayne Williams, who’s managed the KFC at 320 E. Linwood for two years, has seen them too. “There used to be six to eight of them living across the street.” KFC is convenient for the dogs, Williams says, because “bums get in and take the bags of trash out of the Dumpster. That gives the dogs something to hang around for.”

Stauffer was unconcerned about the dogs until this summer, when construction began. (City officials last year convinced retailers Costco and Home Depot to anchor the redevelopment project.) The pack retreated to the still-empty Gillham side of the project, where it continues to hole up at night.

Workers at the site say they haven’t noticed the dogs but that they aren’t particularly looking for them.

Their pack behavior is similar to that of wild canines, says Kevin Hogan, a naturalist with the Kansas City Zoological Park’s Lakeside Nature Center in Swope Park. A pack of strays is nearly always on the edge of starvation and will “catch and kill any game,” Hogan says. “A pack can be dangerous — new strays especially — because they don’t have the fear of us that truly wild animals would. They become a danger to people if someone startles a mom with pups or disturbs them when they are at a food source.”

Fluctuations in the size of the Glover pack probably result from females’ coming into heat. Kansas City Animal Control Supervisor Dave Merrick says strays in the city are not likely to pack — and pets won’t jump fences and break leashes to run with a pack — unless an “older bitch is in season. Once she has a litter, they kind of break up.” Male pets return home. Strays melt into the urban environment, to be caught later or become “so street-smart, we will never find them.”

Merrick, who has been with Animal Control for 18 years, says midtown had a serious problem with stray packs from the mid-’80s to mid-’90s. “We got persistent with capture and leash-law enforcement. We don’t have as many packs today, and they are not as big as they used to be.”

Stauffer admires the dogs’ resilience. “They are really resourceful to have been there for so long,” he says. “It was actually kind of nice to see how nature returns after man leaves. But now they are out and running around, and we need to have something done about it.” He says he talked to Animal Control agents who told him a shortage of officers has kept the department from pursuing the Glover pack.

But Kansas City Animal Control Supervisor Gerald Countz says he will step up patrols in the area.