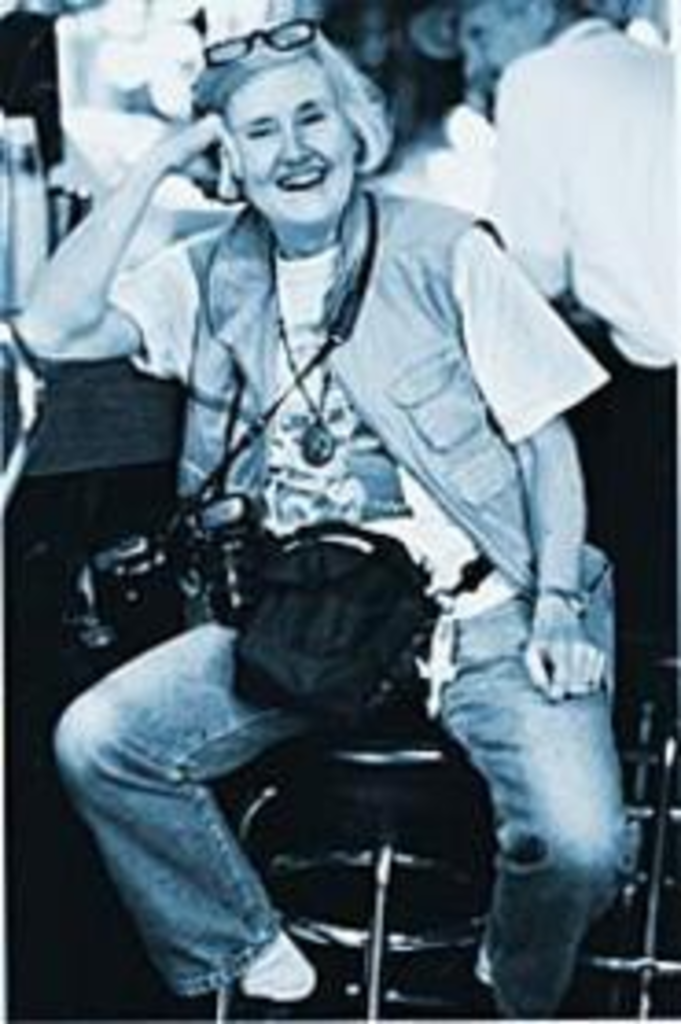 Photographer’s eye gives her a ticket into the world of blues
The crowd members are getting their boogie on as if they couldn’t care less who’s on stage, as long as the music sounds good. In the middle of the celebratory mayhem is a small lady standing in front of center stage. She’s pointing her camera — like a marksman aiming a rifle at a target — at singer Robert “Bilbo” Walker in his canary yellow suit. The only indication she is taking photos is the small hand movement she makes while adjusting the lens, and the ever-so-slight motion of her finger clicking the Nikon N-90S. There’s no flash. Blues men don’t much care for camera flashes when they are performing.

As Walker rips into his set, wailing and howlin’, the club heats up. Sixty-year-old Evie Quarles maintains her cool, her camera handy while she wears one of those “I’m about to go on a great adventure” photographers’ vests. Patience is a big part of her art. Quarles sometimes waits hours just to capture the perfect expression.

She is on a mission. Her task: to photograph the living legends of a genre of music inspired by the pain and struggles of black folk, music that was born in the depths of the Mississippi Delta and migrated north when African-Americans were in search of “good” paying industrial jobs during the first half of the twentieth century.

Like every great blues artist, Quarles has a story to tell.

She graduated from the University of Tennessee with a teaching degree but opted not to teach. “Teachers need to be called and I wasn’t,” says Quarles. “I would have made a miserable teacher.” She chose instead to enroll at the Memphis Academy of Arts, now the Memphis College of Arts, to study painting. That led her to Hallmark.

For 35 years, Quarles designed greeting cards. She specialized in floral designs for those mushy messages people give on holidays and to sick friends or family. After a few years working in the Hallmark setting, Quarles decided to freelance for the company, working from her home until she retired in 1997.

As an artist, Quarles developed an interest in photography and began taking snapshots, the amateurish pictures millions of novice photographers produce — overexposed, poorly framed, and grainy. Quarles’ 27-year-old son, Josh, a professional photographer and Web site designer, noticed that her interest went beyond just wanting to capture her family on film in front of historical monuments during vacations. But his attempts to get her to take photography classes initially failed.

As Quarles’ interest in photography continued to grow, she sought her son for advice. “I kept calling my son, who was enrolled at the University of New Mexico, and asking him questions about photography,” says Quarles. “He suggested that I go to Penn Valley and take a class so I would quit asking him the same stupid questions.”

Shortly after Quarles retired from Hallmark, she enrolled in a basic photography class at Penn Valley Community College. Looking for a subject to photograph for her final exam in late ’97, Quarles wandered the sidewalks around 39th and Main. As she passed by the Grand Emporium, she heard music. Local blues artist Milage Gilbert was on stage in the middle of an intense set. Quarles decided to drift in and was immediately hooked.

“I approached Roger Naber (co-owner of the club) and told him that someone ought to be documenting all of the great acts that come through the Grand Emporium,” says Quarles, who has photographed more than 700 blues artists, mostly at the Grand Emporium. “I just didn’t have the passion for painting and artwork that I have for photography.”

Quarles’ experience at the club was not her first exposure to the blues. She grew up listening to R&B as a child in Halls, Tennessee, 60 miles north of Memphis and 15 miles from Nutbush, where Tina Turner, whom Quarles idolizes, hung out as a kid. Quarles’ father, Pete Smith, was a jukebox vender. His job was to collect the money and change the records. Quarles would travel with her dad as he made his rounds, and she was introduced to soul music and black and white dives at an early age.

“It was great because I would get to go with him, usually on Saturdays, to Memphis to ‘pop tunes,'” says Quarles. “He would get the new records, and if I was lucky, I could talk him into getting one for me. That was right when rhythm and blues and everything was about to converge into rock and roll.

“WDIA radio in Memphis was the first all-black radio station in the country. It started broadcasting in 1948.” (Kansas City’s KPRS 103.3, the oldest existing black station in the country, began broadcasting in 1950.) However, the station Quarles and her friends listened to was WHBQ. “A few years after WDIA started broadcasting, WHBQ had the first white DJ, Dewey Phillips, to play black music. His program was called ‘Red, Hot, and Blue.'”

The show, which played “race” music (as it was called back then), was a big part of Quarles’ and her friends’ social cultivation. “We would often drive to an abandoned B-17 airbase, park our cars, turn on ‘Red, Hot, and Blue,’ and dance,” she remembers.

Quarles has only one regret from those years. “I wish I would have saved some of those old 45s my dad used to stock in the jukeboxes,” she says.

Photos and stories told by many a blues artist is what Quarles now collects. Those experiences have her earning her stripes in the blues community. Quarles is a fixture on the Kansas City blues circuit, shooting just about every live performance she can attend. Her main stomping ground is the Grand Emporium, but she also has shot festivals and a few other clubs.

An average of three nights a week, Quarles gets the blessing of her husband, Bob, and heads to the club to take photos. She also works out three days a week and takes vitamins to stay in shape. She works even harder to overcome her technical shortcomings and perfect her craft.

Quarles spends hours in her darkroom every day developing and printing photographs — all of blues artists, nothing else. Her hobby has turned into a passion and her goal is to keep the blues alive. Quarles has shot everyone from local harp wizard Brody Buster to blues legend B.B. King.

A collection of 50 of her photographs, titled “See The Blues,” was on display at Shariz Restaurant last year. The exhibit was Quarles’ first showing of her photography. “Evie’s knack of capturing the pith of performance makes viewing the photos an experience in and of itself,” wrote Paul “El Dormido” Taylor in a critique of Quarles’ exhibit for The Zone Web site.

When viewing Quarles’ work, one notices that her distinctive style leaps out. She is an action freak. Her lens loves to catch the artist in motion and the performance in midnote. It is as if she is one step ahead of the artist and knows when to “set her camera off” — mouth agape, eyes wide open, a bead of sweat suspended in midair are common in the type of shots Quarles gets. Her work is even more distinctive considering she doesn’t use a flash in the dimly lit Grand Emporium. That gives her photographs a raw edginess, much like the music of the artists being photographed.

The next move for Quarles is to publish a book of her photographs. She plans to title the book Two Miles From the Blues because her home is two miles from the Grand Emporium. She is armed with signed release forms but is waiting to land a publisher.

Herman Leonard cut the path Quarles is trying to follow. The photographer had a passion for jazz that led him to the swingin’ clubs of New York. He photographed and developed a friendship with jazz greats Charlie Parker, Billie Holiday, and Duke Ellington, and Leonard became renowned for his exceptional work. Quarles’ ability to learn quickly also puts her in the company of celebrity kingpin photographer Herb Ritts, who began his career by taking informal portraits of his movie industry pals.

However, Quarles’ story may be even more amazing than that of either photographer. She is beginning her career at an age where most people retire and usually opt to partake of hobbies that are a lot less demanding than hanging out until the wee hours of the morning in a smoke-filled room, snapping photos of artists exposing their souls.

“I want people to realize that you are never too old to reinvent yourself,” says Quarles. “I really think I’ve discovered what I want to do when I grow up.”