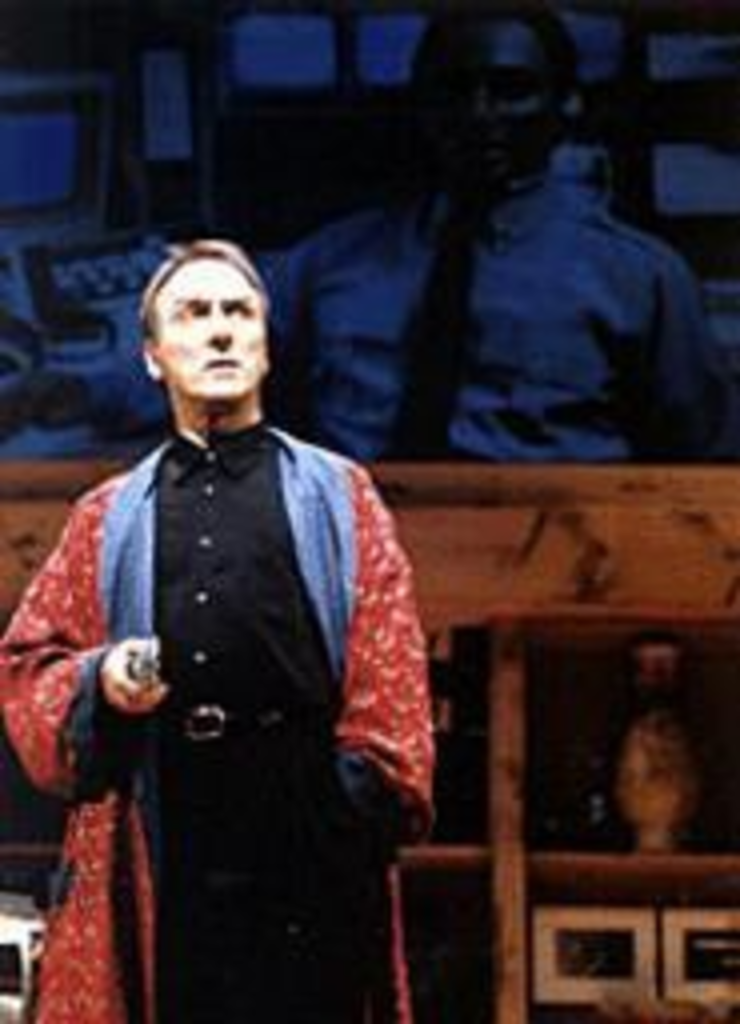 American Heartland Theatre’s high-tech Solitary Confinement is back after a mere eight years. The Rupert Holmes mystery contains now, as it did in its previous run, a robust performance from Mark Robbins as a Howard Hughes-like business titan who is, oddly, both paranoid and gregarious.

Richard Jannings lives in a triplex atop a high-rise in Albuquerque, New Mexico, surrounded by the art and artifacts of other cultures and some Sony-stamped toys of his own. He buys and sells things all day without any real contact with the outside world. Instead, he chooses to communicate via video cameras with his staff — a business advisor, head of security, decrepit guard, secretary and chef who share some weird similarities. For total completion of this hermetically-sealed life, all he needs is a submissive courtesan.

But there is a rumbling of unrest in the lower floors. His employees — who were probably well-screened upon their hiring but haven’t lately been re-evaluated — have tasted his vulnerabilities and seem to be hungry for vengeance. The adage to treat others as you wish to be treated works in both directions, and he sees his life coil back and bite him like a poked rattlesnake.

Under Francis Cullinan’s direction, set designer Del Unruh has created the perfect den for a man determined to isolate himself from the world. A dumbwaiter is the sole conduit between the kitchen and Jannings’ appetite. Three television screens give him a view of his staff from three directions and, thanks to Thomas A. DeFeo’s ultimately creepy sound design, he can call up the sounds of traffic or thunderstorms with the push of a button, simply for his own amusement. Shane Rowse’s lighting accessorizes Jannings’ electric cocoon, most ominously with two lamps of varying colors that signal the release of toxic gas in the event of a security breach.

As Jannings begins to sense that his future is doomed, he naturally gets a bit frazzled, and credit must be given to costumer and hair designer Baker Smith for keeping Robbins free of wrinkles and muss. For a man who has vowed to live by the motto “Never let them see you sweat,” Jannings doesn’t; he’s strangely cool to the end.

Purple reigns: Theatre for Young America’s brazenly energetic Lilly’s Purple Plastic Purse brings new meaning to the word “silly.” Technicolor-costumed actors tell the story of a precocious mouse named Lilly (Cinnamon Schultz) and her rodent friends, family and teacher; reveling in theater without bounds, they don’t enter scenes so much as they erupt from the wings. It’s funny and hip, to boot.

Lilly’s an imaginative spitfire, frequently pronouncing herself “the queen of everything.” Her best friends, Chester (Wayne Asbury) and Wilson (Shaun Roberts), are always up for a chase or a challenge, while her parents (Charles Fugate and Kay Noonan) dote but shift their attentions when a new baby arrives. At school, Lilly is a pet of her teacher, Mr. Slinger (Fugate), while her chief nemesis is Garland (Noonan), the kind of bratty Southern belle you’d find in an old Bette Davis movie.

As manic as it is, Lilly’s life is fairly constant until her little brother arrives, thrusting her into a whirlpool of emotions — chiefly jealousy, anger and spite. She buys a purse, thinking that if she carries it, all eyes will once again be on her. Who could resist such a bag, especially one that plays jazz when it’s unclasped? (There’s lots of Dave Brubeck and Us3 in the show, for no other reason than that it’s cool.) Her ploy is an utter failure until she plays a prank on Mr. Slinger that actually backfires in a way that does her some good.

Under Missy Koonce’s wild and wildly detailed direction, Schultz and her costars seem to have no idea where the play’s going. That can be very bad in many situations, but here it makes for a giddy circus atmosphere. There are several throwaway lines for the adults (including one about Martha Stewart), and Valerie Mackey’s costumes and props make good company for the zaniness of the cast.