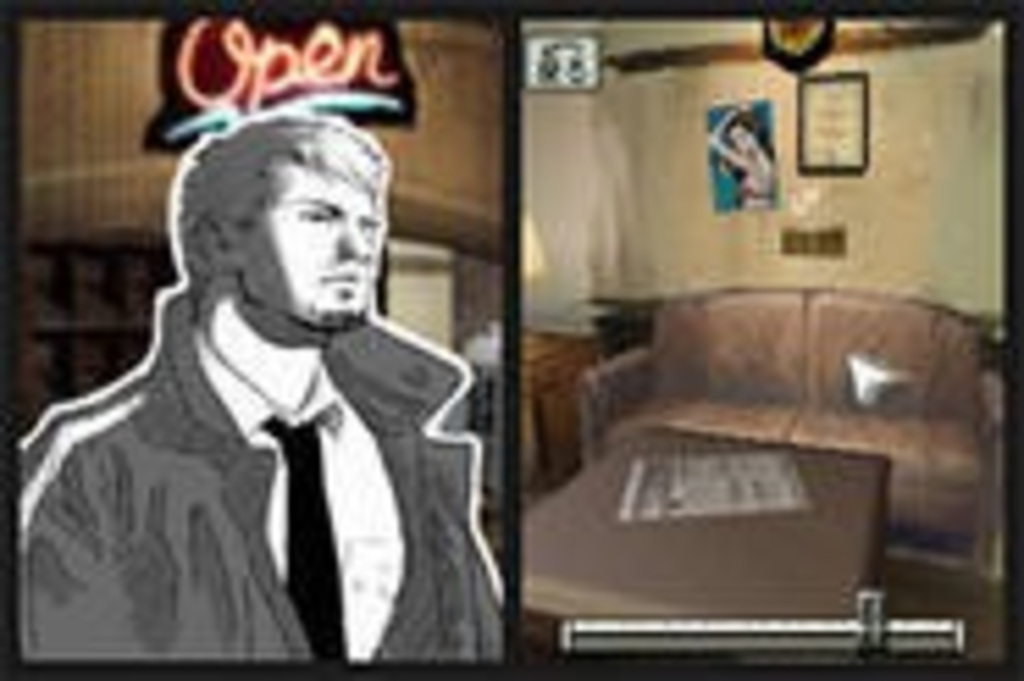 Lately, the Nintendo DS has become a virtual Monster.com. You can play a defense attorney (Phoenix Wright), surgeon (Trauma Center), and even a cook (Cooking Mama).

Now, thanks to Hotel Dusk: Room 215, you can add private eye to that list. But don’t expect the sexy detective work of Chinatown. Instead, you’ll spend hours trudging up and down the same hallway, familiarizing yourself with a hotel lobby, and talking.

And talking. And talking some more. Good lord, enough with the talking!

The story starts promisingly enough. It’s 1979, and you’re Kyle Hyde, a washed-up cop who left the force after shooting his dirty partner in the back. Now Hyde wears the guise of a door-to-door salesman, in the business of “finding things that don’t always want to be found.” And business has taken him to Hotel Dusk.

Upon first glance, Hotel Dusk is an ordinary, dumpy motel out in the sticks — Norman Bates would feel right at home. But there’s a twist: Rumors abound that Room 215 grants the wishes of whoever stays in it, and that’s Hyde’s room.

While the hotel’s floor plan is 3D, characters are rendered as animated pencil sketches, lending a cool graphic novel feel. It doesn’t look like any other game out there — always a nice change of pace.

But “pace” is where Hotel Dusk crashes and burns.

Hotel Dusk is amazingly text-heavy. No joke: You will spend 90 percent of the game’s 15 hours reading. It wouldn’t be so bad if the writing were tighter, but characters in the game tend to ramble on, and way . . . too . . . slowly. Occasionally you get to do something vaguely private eyeish — twisting a paper clip into a lock pick, maybe — but then it’s on to another conversation, clicking through more pages of dialogue.

Then the trail goes cold. Too often it’s unclear what to do next, so you resort to aimlessly wandering around the hotel, knocking on doors and searching linen closets, until you accidentally trigger the next sequence of events.

There are lots of eye rolls to be had with Hotel Dusk‘s story, but perhaps the oddest is its 1979 setting — a period more David Starsky than Sam Spade. It wants to be a noirish private-eye mystery — but in an era when The Jeffersons were movin’ on up. Even Hyde seems unclear on the decade, constantly referring to women as “dames” when he should be quoting Led Zeppelin.

Some reviewers have actually praised the game’s writing, but that probably says more about their diminished expectations than anything else. Not only does the story leave out all the tastiest bits of noir — violence, sex, and moral ambiguity — it does so in favor of all the genre’s worst clichés. Take this choice exchange:

DAME: “You’re not much of a conversationalist, are you?”

DAME: “I’m sure you can carry all manner of things.”

There really isn’t much of a game involved here. Mostly, you’re just tapping the DS’s touch-sensitive screen to reveal more text — you even hold the DS sideways like a book. Given this, it’s kinder to think of Hotel Dusk as an interactive pulp novel, rather than a traditional videogame. But if you’re going to spend a dozen hours reading, you’d probably be better off with, well, a real book.