Déjà vu and shark tacos too 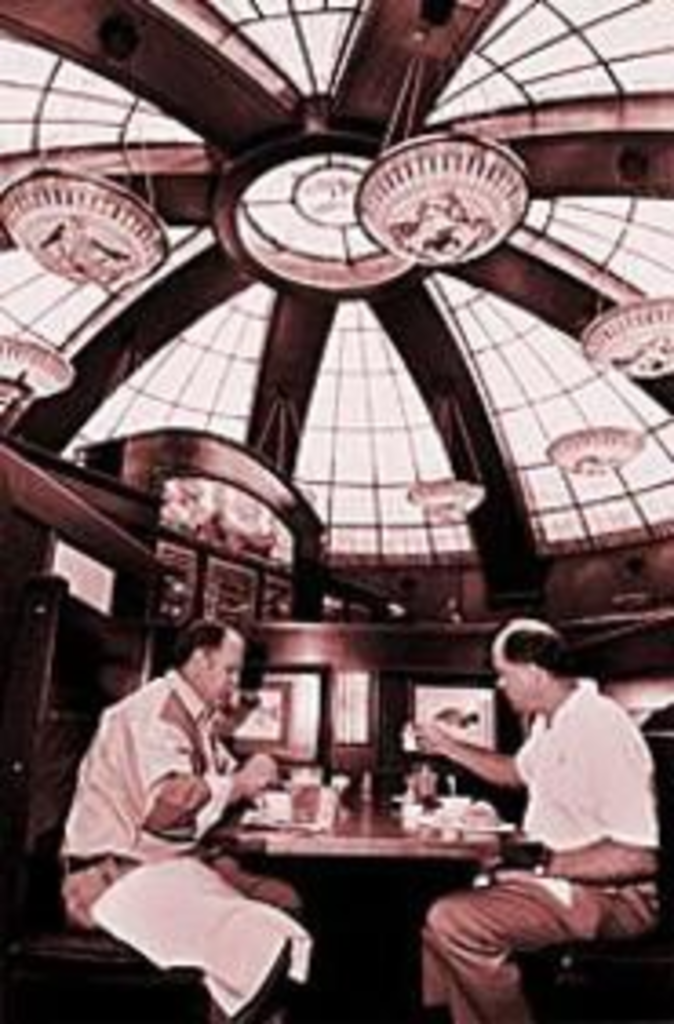 Longtime Kansas City diners who step through the revolving glass doors leading into the six-week-old McCormick & Schmick’s Seafood Restaurant, located on the second level of the as-yet-uncompleted Valencia Place complex on the Plaza at 47th and Pennsylvania, will probably feel a sense of déjà vu. The restaurant is the first Kansas City outpost for the Portland, Ore.-based McCormick & Schmick’s, but the spirit of the original Bristol Bar and Grill, a fixture on the Country Club Plaza for 15 years, is alive and well here.

That’s not only because Mary Montgomery, the longtime manager of the old Bristol, is here as general manager and has lured many of the former Bristol employees back with her (including executive chef Steve Foote, who opened the new Bristol in Leawood), but also because the look of the place — dark, polished wood; heavy green curtains; and an eye-popping stained glass dome — evokes memories of the popular restaurant that left the Plaza in 1995 after losing its lease. The Bristol was replaced by another seafood restaurant, the flamboyantly decorated and unsuccessful Jules (which boasted a “live” mermaid, a giant aquarium, and inconsistent food). But Jules was doomed from the minute it opened its glass-pane doors: Loyal Bristol fans blamed the restaurant’s owner for the Bristol’s move to Johnson County, and many refused to even step into the flashy new Jules. The result? It sank, and the space has sat empty for months, only recently obtaining a new tenant, the Atlanta-based Capitol Grille — another steakhouse.

My friend Diane was one of those Bristol loyalists who snubbed Jules. But when she joined me at McCormick & Schmick’s for a meal, she liked the place at first glance because “it was like the old Bristol.” It would be fair to say that the new McCormick & Schmick’s, which features a glamorously upscale interior created by the company’s own design team, has more in common with the old Bristol than the new Bristol (which took its antique dome along when it fled to the suburbs).

And the design is very dramatic. The dome at M & S is sweeping in scope, done up in shades of cream and caramel that change, according to Montgomery, throughout the day as the light filtering into the place changes. In the center of the dome is a tribute to Missouri: the state flag and the “Show Me State” motto all done up in pieces of colored glass. It’s the centerpiece to the restaurant’s circular main dining room (with the noisy, busy bar in the center), where most diners prefer to sit.

On my first visit, when I was seated in the more intimate, demure, and quiet second dining room, which adjoins the big room, I saw an acquaintance wrinkle up her nose in anger after the hostess (another Bristol veteran) escorted her to the table next to mine. I nearly took it personally.

“I wanted to be in the other room,” she said. “That’s where the action is.”

Action? On busy Friday and Saturday nights, the round room is virtually la dolce vita, with customers nearly falling out of their chairs to see and be seen by the rest of the beautiful people.

“I saw everyone who was anyone there last Saturday,” gushed a friend of mine, dropping names that weren’t exactly A-list but snazzy enough to lead up to a real punch line: “And after this guy at the bar bought me a Campari and bitters, he took me for a ride in his new Porsche!”

She would have done better if he had bought her dinner instead, because the food really is marvelous here. Much more exciting than the Fellini action in the main dining room or whatever earth-shaking business deals (or hanky-panky, for that matter) might be taking place in the cozy private dining rooms called “snugs,” closed off by heavy velvet draperies.

The smaller dining room is ringed by these snugs, but on one visit we were seated at a friendly little table in the center of the room, draped in thick white linen and adorned with fresh flowers in a heavy glass vase. It all sounds very fancy, and it could be — if there were a dress code. My dining companion and I had sort of dressed for the occasion: starched shirts, pressed pants, and good shoes. Most of the other diners were decked out in comparable fashion, but we all seemed totally overdressed when a trio of unabashed tourists strolled in, looking perfectly comfortable in shorts, flip-flops, and polo shirts.

An equally casual couple was seated at another table, he still gabbing into his cell phone as he walked through the dining room. The man at the next table was blathering into his phone too, but it was easy to overlook his bad manners (and bad hairpiece) once the server brought the appetizers: the cold carpaccio on a bed of mustard-dill sauce ($9.85) and a plate of hot, crunchy fried calamari rings ($8.90) that can be dipped in a sweet sherry mayonnaise or a pungent horseradish-flecked cocktail sauce.

The Asian Seafood Spring Rolls ($6.20) are light and, like the calamari, practically greaseless, served on an Everest-size mound of chopped cabbage and a few julienne vegetables — too much for a garnish but not interesting enough to eat, unless there had been a splash of dressing to turn it all into slaw. There were 15 appetizers on the extensive menu the first time I visited M & S, 12 the next. The menu changes 14 times a week; a new menu is printed out twice a day. That makes reviewing the restaurant a challenge, although certain standby dishes appear to be a constant here, like deep-fried Mississippi catfish ($12.85) and rainbow trout in a brown butter sauce ($12.90), which were featured on several menus.

But the menus are impressive, with at least 30 varieties of fresh fish and shellfish served up grilled, broiled, fried, seared, sautéed, or folded into taco shells. Chef Foote’s staff is accommodating too. When my friend Diane was disappointed to find out that the blackened shark tacos, served with a spicy jalapeno-avocado vinaigrette ($8.90 on the lunch menu), had been “sold out,” her request for the dish to be made instead with spearfish was granted — and they were delicious enough that I grabbed one for myself.

The soups are nourishing and hearty here, particularly a peppery chicken gumbo, chock-full of grilled chicken. A seafood and fresh corn chowder, happily light on the corn, is creamy and soothing. The soups and salads can be devoured with a half-round of fresh, chewy sourdough bread, made locally at the Farm to Market Bakery. Slathered with butter, it’s just as comforting as those Bristol drop biscuits and easier to dunk in the hot soups.

Choosing one dinner entrée is a difficult decision here, with 31 different seafood entrées on one Wednesday night menu (not including four beef offerings, a roasted chicken, a grilled chicken, a barbecued pork chop, and a cheeseburger). The price might influence some diners’ decisions, but both the baked scrod with lemon butter at $12.70 and the steamed live Maine lobster at $24.65 are served up with the same flourish and generous portions.

The juicy Gulf white prawns ($19.90) — served scampi-style in garlic, wine, shallots, and butter over a big plate of pasta — are a showy variation on an old-fashioned favorite but can’t hold a candle to the Chilean sea bass ($18.75), marinated in salty miso, that pungent fermented bean paste, a staple of Japanese cooking. Lightly seared and floating on a cake of white rice, this fish is delicately spicy and a wonderful contrast in textures, gobbled up with a vinegary “slaw” of Asian vegetables.

The service is smooth and polished, although not all the servers are wise as to the various ingredients in each dish and the accompaniments that arrive with each entrée. On one lunch visit, our server insisted that Diane’s tacos had arrived with a side of “seafood chili,” although the pile of sautéed peppers and tomatoes bubbling near a scoop of white rice clearly was neither seafood nor chili. We argued but finally called it a draw. Her chili was our Creole sauce.

A dinnertime server was a smoother operator. After bringing out the dessert tray despite our claims of being stuffed, he described each of the pastries with the dulcet tones of a snake charmer. The dessert tray had no surprises: There was a dense, flourless chocolate “truffle” cake (which I tasted later and found to be dull-tasting), apple pie (here served “upside down” as a novelty), hot berry cobbler, strawberry shortcake, and pecan pie flavored with bourbon.

“But we also have,” the waiter said in a half-whisper, as if revealing a deep secret, “a very special dessert. It isn’t on the tray. It’s a bag of molded chocolate, filled with the fluffiest of white chocolate mousse, the freshest of just-picked sweet berries …”

We were convinced. It took awhile to arrive, but when it materialized, the fabled Chocolate Bag ($6.25) was something to behold. About the size and shape of something you’d carry home filled with three tomatoes from the City Market, this crisp confection was half-filled with a sugary mousse and mounds of fresh strawberries, raspberries, and fat, black raspberries. As we began poking at the chocolate with our forks, we noticed diners at other tables watching us, including the guy at the next table who began describing our dessert in detail to the caller on his cell phone.

And that’s no fish story.