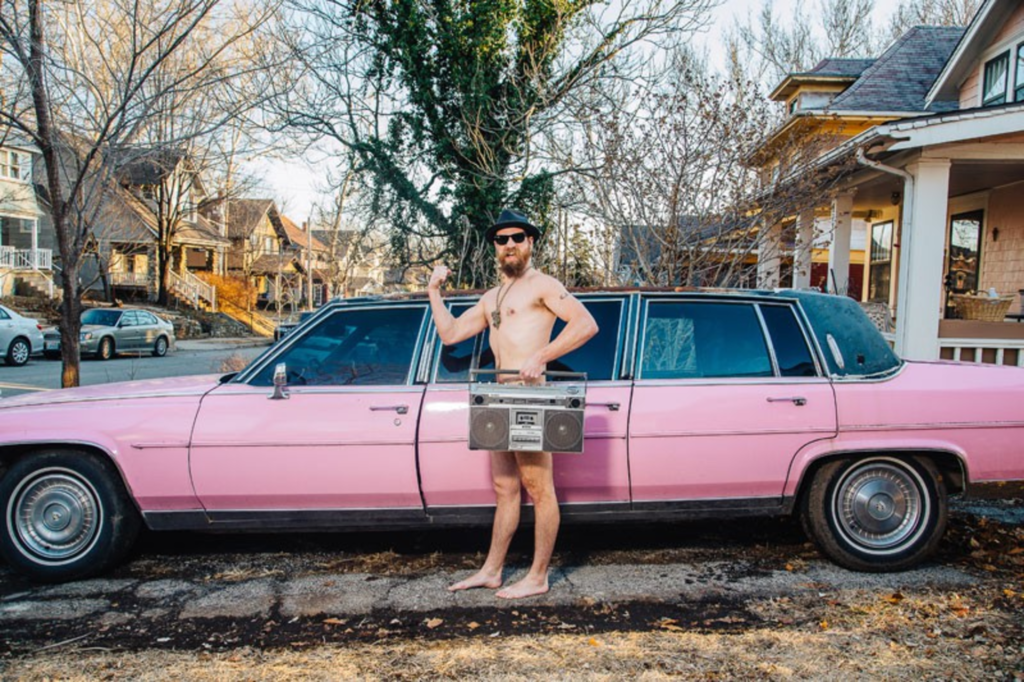 If I’m going to have a girl come over, I have to clear a pathway in my room,” Clinton Martens tells me. “There’s just boxes of records everywhere. It looks a little horde-y.”

“Horde-y” might be an understatement. Martens counts about 10,000 records in his collection. At least it’s his job: Martens, 33, is a professional disc jockey — known as DJ Thundercutz — and he spins only vinyl.

He knows what he’s doing. In early March, Martens opened for Broncho and the Growlers at two sold-out shows at Lincoln Hall in Chicago. And at the end of the month, he flies to Los Angeles to perform at Burgerama, the two-day music festival (put on by Burger Records) that this year features Weezer, the Black Lips and Thee Oh Sees. He’s also fitting in a session at L.A.’s House of Blues before it closes permanently later this spring.

As Martens was kicking off the whirlwind month, I called him to ask about all of those records.

The Pitch: Tell me about what attracted you to vinyl.

Martens: What started me getting into this was, I would basically just go out socially, and I constantly did not like the music that I had to hear. I thought I could do a better job, and I started to become a record collector that way. I’ve always loved older music, stuff from the ’50s and ’60s and ’70s, and I got influenced with soul music in particular. I’ve just kind of carried it over into a career.

What makes what you do different from my sitting in my living room spinning my own records?

One: I’m a record collector. It’s what I do. My knowledge on time periods and eras and music and how things have changed over time is steep. And I’ve self-educated. I used to work at Ear Wax Records [in Madison, Wisconsin], and I basically just traded all my time for records. That really brought my knowledge in.

And the mix — I’ve gotten good at it. I’ve worked at it: taking a small piece of the song and branching it to another song. I’m good at reading a room and taking in nonverbal cues. Most of the time, people aren’t in the bar to listen to songs. They’re there to socialize. But if they’re looking my way and they’re interested, I take a note of that.

I don’t have a preplanned set. If I’m going to play 100 songs, I’ll bring 500 songs to choose from. I love being able to have only two to three minutes to pick the next song. That’s exciting to me, the small amount of time I have to make that decision. That’s where it gets creative for me.

How do you organize all of those records?

It’s kind of controlled chaos. I tell everyone: Give me two boxes and I can find what I need. I organize it by genre. This fits me because growing up, I was heavily into sports and I used to have a huge baseball-card collection, and then I moved on to vintage clothing in my 20s, and now it’s transitioned over to records.

I’ve always been somewhat obsessive. The thing that will keep me going forever is the treasure hunt. When you walk into a secondhand store or whatever, it’s finding the thing you never thought you would find. It’s an addiction that will never go away.

I feel like it would be just as easy to catalog it all digitally.

Easier, maybe, but not as good. When you play a record, you’re talking about the closest sound, reproductionwise, to the actual thing, besides nearly impossible-to-find reel-to-reel tapes. Digital files — they’re all compressed. They’re zeroes and ones, algorithms. You hear a record, and it feels warm, and that’s because it’s an actual representation of what you’re supposed to hear. You want fidelity, you go with records.

The personal connection that I feel with my records, whether it be rockabilly or soul or surf — there’s so much information there. I do mostly 45s, 7-inch records, so I’m buying things that are not in as high demand. I think most buyers go for an LP, as opposed to me — I’m looking for that one rare single that somehow is in Kansas City.

That’s the really cool thing — if I find a reggae record in a little booth at an antique shop in Kansas City, I’m like, “OK, whose was this? How did this get here?” That way, I can learn about the people or the culture at that time. To know that someone put some care into this piece of music, that makes me feel like I’m carrying the torch. I’m looking for the old souls of the world and connecting with them that way.