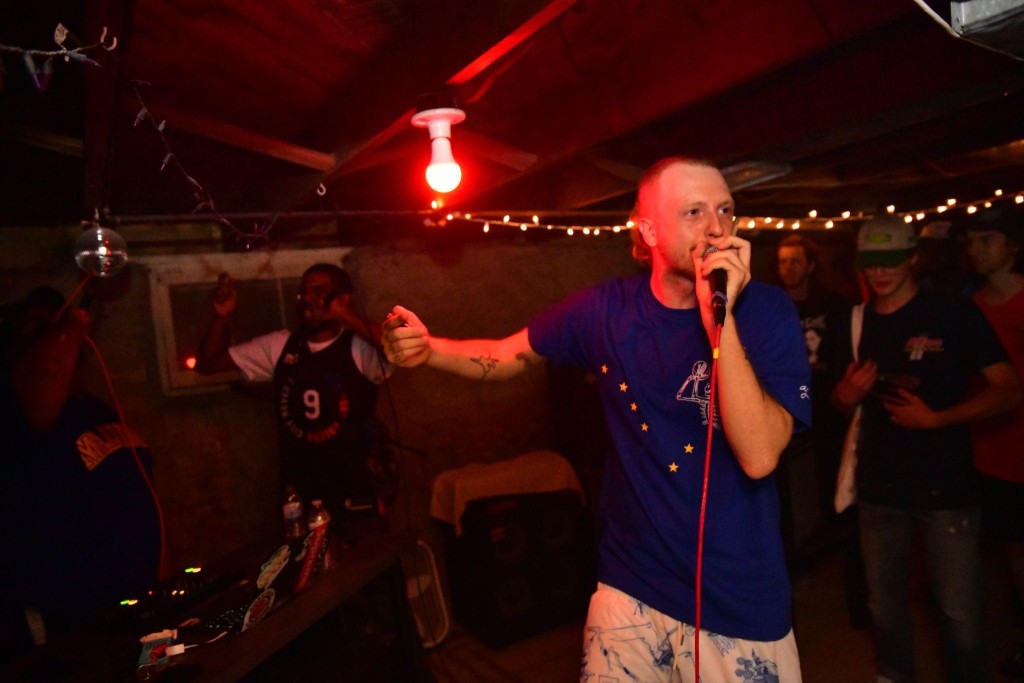 DJ Lucas sure knows how to command a room (or should we say a basement). The Massachusetts rapper headlined the Shuttlecock show alongside Papo2oo4 and DJ Subjxct 5 at local DIY venue The Toilet Bowl on Wednesday night. For a weeknight show promoted through a flyer without an address, the crowd nearly filled the basement.

The night started off with a gathering of twenty-somethings on the main floor of the home. The entry fee was pay-what-you-can with a suggested ticket price—an equitable act when it comes to any music scene. This also suggested that the priority of the night was about fully experiencing the music, which aided in the atmosphere of the evening.

As is typical with DIY shows, the music started around an hour later than planned, but with no hard feelings from the crowd. When the first band was ready, people quickly ushered themselves downstairs to the unfinished basement adorned with string lights and a solo red lightbulb. The mood felt broody and obscure—a solid enhancement for the acts to come. 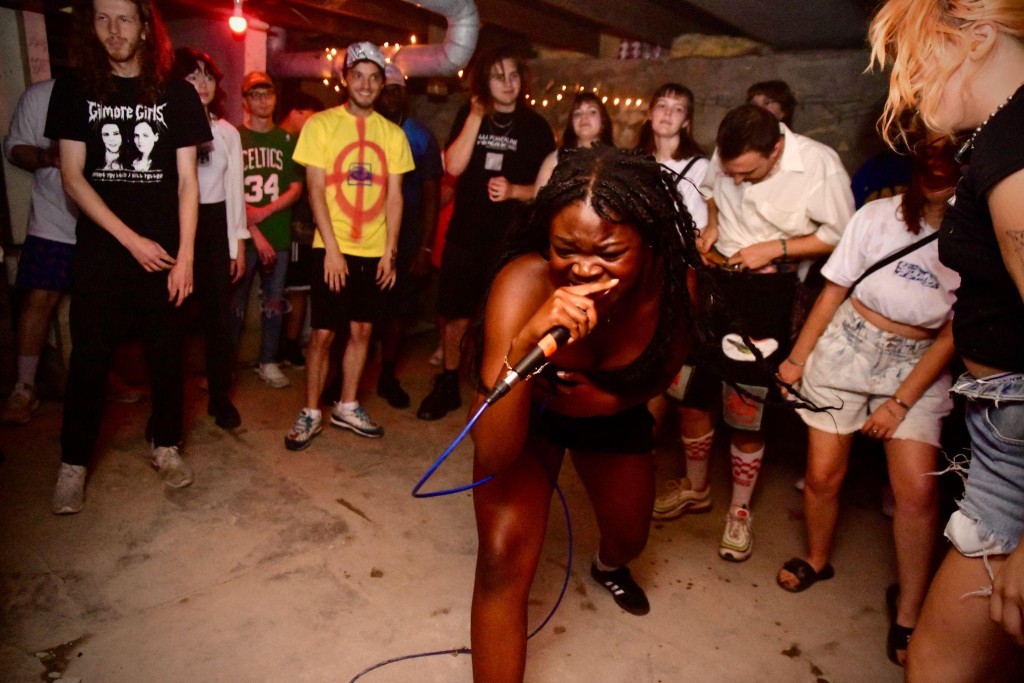 Due to The Toilet Bowl being a smaller space than a typical venue, the crowd did not shy away from standing near the artists. Midwestern kicked off the night with a passionate performance that set the tone for the whole evening.

The duo used a unique combination of screaming, singing, rap, and body movements to express themselves. Their execution was similar to more abstract performance art and was a great fit for such a freeform space.

The general social conduct of the show was to go upstairs between sets to mingle or smoke a porch cigarette, providing a chance for attendees to converse with the artists.

Shortly after 10 p.m., the second act of the evening, Laae Uzumak!, played a brief solo set. She was able to hype up the crowd with hip-hop styled vocals and party-esque beats that transitioned smoothly into Subjxct 5’s house-based DJ set. 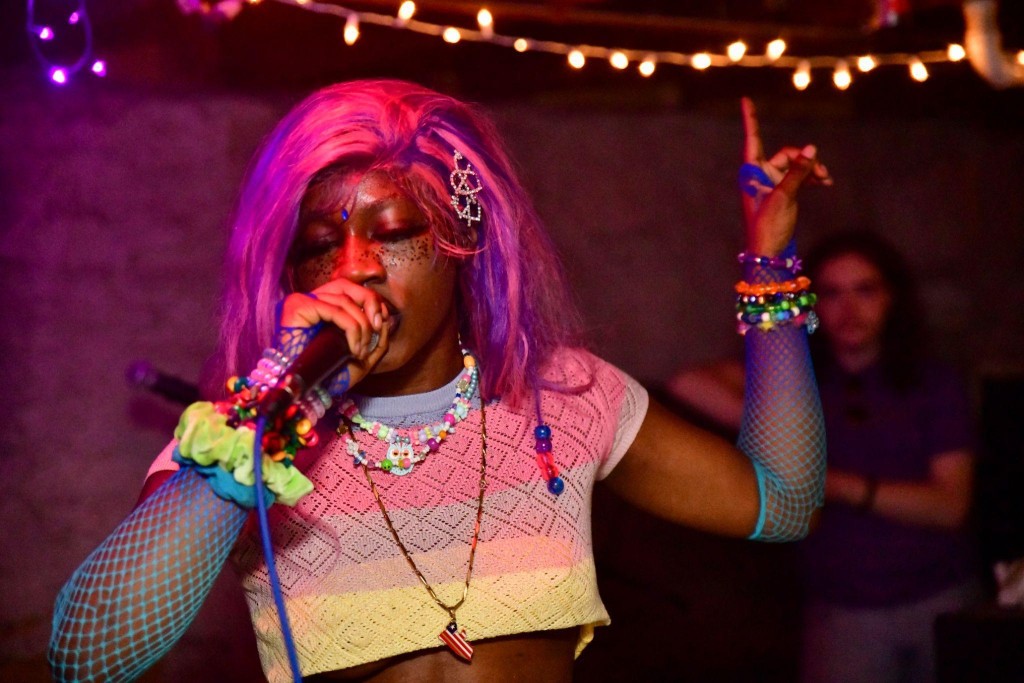 Subjxct 5 hosted the intermission between sets until DJ Lucas was ready to take the floor. Around 10:35 p.m. the headlining rapper proceeded to stand in front of the crowd sporting an almost fully shaved head and sweat shorts. Subjxct 5 managed his tracks, and Papo2oo4 rapped backup vocals—both consistently hyping him up throughout the set.

The show provided a strong example of DJ Lucas’s niche cult-like following, with more than half the audience members able to rap along with him. 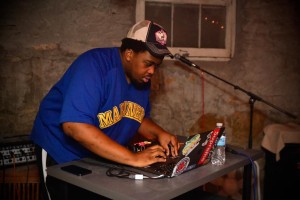 The clarity of DJ Lucas’s vocals layered over his prerecorded catchy beats were delivered with a captivatingly confident attitude.

His theatrical performance style and tongue in cheek lyrics easily won over the basement goers.

He even name drops Lawrence, KS in his song “Spirit from You” from his 2019 album The Hipster Nation is Crumbling, which was an obvious crowd-pleaser.

DJ Lucas leaned into the intimacy of the space by providing background insights on his songs, such as using a beat he made when he was a child and encouraging moshing.

Even members of the opening acts could be seen enjoying themselves—all examples of special show moments that become heightened in more intimate spaces.

As the night ended, DJ Lucas, Papo2oo4, and Subjxct 5 expressed sincere gratitude towards the space, the venue’s hosts, the opening artists, and Shuttlecock.

The wholesome atmosphere of the night felt encompassed by the successful matching of local opening acts to touring artists and DIY venues. 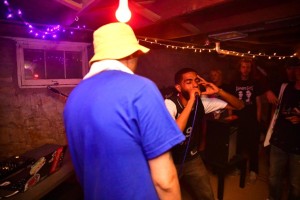 After all, no matter how big a following, the key to a successful rap show is winning over the crowd. Conversely, a good house show takes a large amount of vulnerability to garner success.

For all five performers to be able to connect strongly with the audience was an impressive feat.

As a newer DIY venue, The Toilet Bowl has primarily hosted artists from the Midwest. DJ Lucas seems to stand as an exciting milestone of growth for the venue, helping to secure The Toilet Bowl’s place as the Lawrence house show hot spot.

Although filled with basement dust and pipe condensation, it only aided in the grungy experience that the Toilet Bowl offered. The atmosphere during Wednesday night’s show felt like a collectively positive event for all, something the scene has been missing for a while.