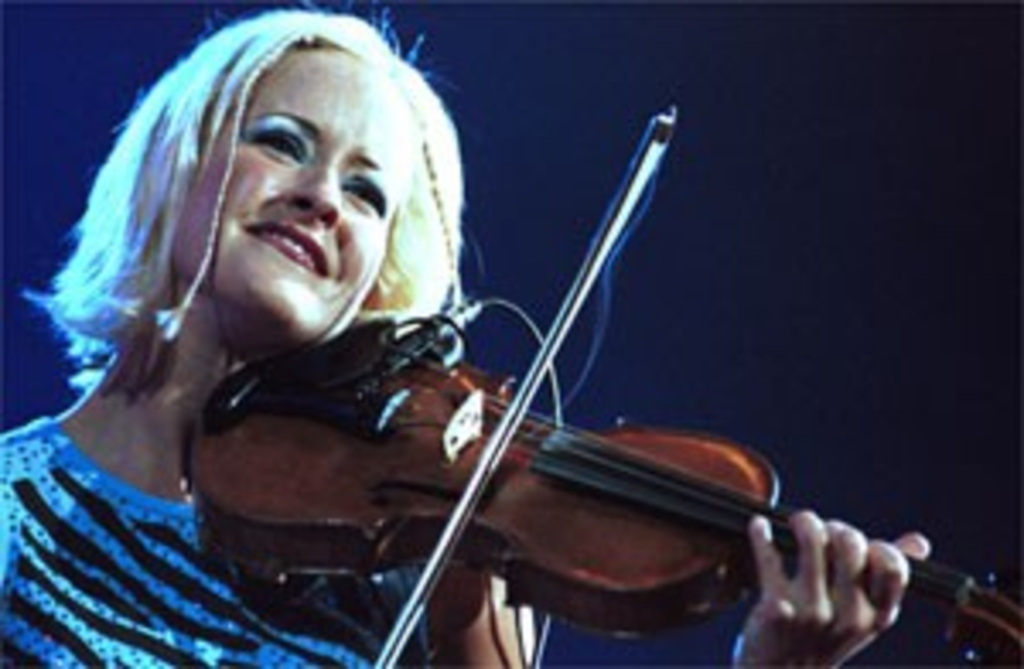 Even the most mainstream of country acts, such as the Dixie Chicks, don’t get the kind of omnipresent attention that’s lavished on pop’s platinum artists, so it might come as a surprise to many to learn that this trio outdid even Britney and Christina for fan enthusiasm and pure scream volume. Whenever opener Patty Griffin, the evening’s hyperactive emcees, or the members of the headlining group themselves intoned the words “Dixie Chicks,” a Dolby-sound quality roar arose from the packed arena, and when one of the ladies mistakenly referred to the group as the “Chixie Dicks,” much hootin’ and hollerin’ ensued. The Chicks rewarded their noisy following with a sprawling 21-song set that came complete with well-chosen covers, sporadic choreography, and even some Hee Haw-style canned comedy.

The just-for-laughs segment of the show was actually both entertaining and endearing, which was unexpected given that the skits shown on “Chicks Music Television” prior to the concert were lame at best. After seeing such Jenny McCarthy Show-caliber gags as the “matrimonial motorcross,” the crowd was quite eager to see opener Patty Griffin begin her set, although a vocal contingent lost interest once it became evident that she wasn’t exactly a country artist. Rather, Griffin favored light, keyboard-tinged tunes and all-out rockers, both of which provided flattering forums for her flawless voice. Alternating between an acoustic guitar, an electric guitar, and no guitar, as on the touching set-ending ballad “Mary,” Griffin crooned sweetly, with a white-afro-sporting bassist and a keyboardist/accordion player as her most notable assistants. The arena setting wasn’t the best fit for Griffin’s subtle songwriting efforts, but her smooth voice capably reached every corner of the venue, and her unquestionable talent left even the skeptics applauding as she left the stage.

After teasing the audience with a giant inflatable fly, a steady buzzing noise, and a snippet of Lenny Kravitz’s “Fly Away,” the Dixie Chicks emerged in glitzy outfits and broke into “Ready to Run,” the opening track from their most recent release, Fly. While Martie Seidel fiddled feverishly, Maines unveiled a few funky dance moves for which no choreographer would be willing to take credit. She strapped on a guitar for the next song, during which she broke into a headbanging frenzy, then strolled across the stage during the honky-tonk tune “Hello Mr. Heartache” while Emily Robison handled the strings. This was the first of three consecutive slow numbers, a set-list phenomenon that, refreshingly, was designed to establish a sense of order in a lengthy set instead of necessitated by pace-sensitive costumes.

All three Chicks were handy with a variety of instruments, although they were assisted by a five-piece band that played in their shadow. Maines’ voice, which occasionally sounds cartoonishly twangy on disc, was convincingly powerful throughout the performance, and Robison and Seidel chimed in nicely on the harmonies.

After a stellar rendition of a Bonnie Raitt tune, which was prefaced by the confusing claim that Raitt is “the queen of blues,” crew members hauled a couch onto the stage. This seemed to forecast another stream of ballads, and, in fact, three more downbeat numbers soon followed, but first came an unexpected treat. After announcing they were “never above humbling ourselves,” the Chicks broadcast a series of unflattering photos, ranging from yearbook pictures with ill-advised hairdos to the always-embarrassing Glamour Shots, and addressed them with cutting, sometimes spontaneous quips. “You were all ugly at some point,” Maines told the crowd before the slide show. She ended this segment of the show with a public service announcement, lecturing against the evils of the hairspray-erected “mall bangs.” It was a performance piece most best-selling acts would never do, and it offered a telling glimpse into the group’s down-home appeal.

Griffin joined the band on the couch for an impressive duet with Maines, then Robison took a turn on the accordion for another tearjerker about heartache. After a low-key rendition of Sheryl Crow’s “Strong Enough,” the trio ripped into a fiddle-driven romp before setting the dance floor in motion with a couple of bouncy traditional ditties. Following a confetti-speck-punctuated version of “Cold Day in July” that prompted young fans to point at the ceiling with glee, the trio danced and clapped to an upbeat jaunt before slowing the pace one last time during a number that saw Maines elicit boisterous applause by pointing different sections of the crowd as she sang “closer to you.” The proper set concluded with the frantic hootenanny “Sin Wagon,” which ended with an impressive jam session as a billowing red curtain that emerged midsong dropped to the floor.

People who attempted to leave before the encore were prevented from exiting, which was quite puzzling until the Chicks were spotted whizzing past in motorized carts. Once they safely assumed their places in the crowd, with Maines hovering about the floor section and Robison and Seidel planted in opposing balconies, fans were again free to beat the masses to the parking lot. Above the anonymous band, which was left to fend for itself on the empty stage, the video for “Goodbye Earl,” the Chicks’ catchy rant against spousal abuse, played on the screen. After this popular tune was greeted by some of the loudest cheers this side of TRL, the Chicks capped their thorough performance with “Wide Open Spaces,” which yielded a hearty sing-along from the band’s boosters. Among this chorus were doubtlessly some avowed country-haters dragged to the concert by their children, siblings, or significant others. By pairing melodic, mostly self-penned tunes with engaging personalities and an assured but occasionally self-deprecating stage presence, the Dixie Chicks produce music that tips a Stetson to their talented predecessors while adding enough “new country” polish to attract curious nontraditionalists.