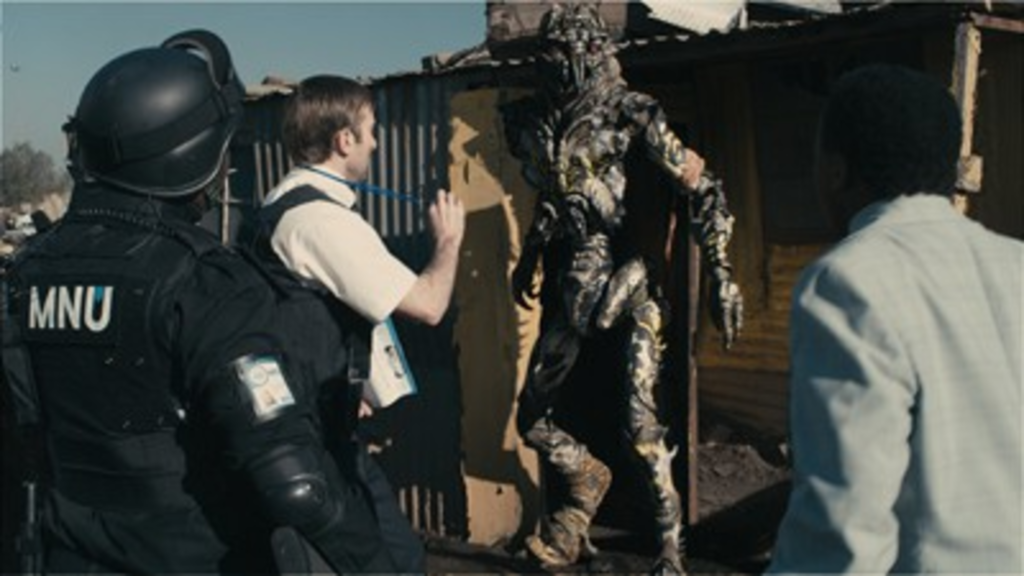 The aliens have been with us for 20 years already at the start of South African director Neill Blomkamp’s fast and furiously inventive District 9. Their huddled masses were long ago extracted from their broken-down mothership and deposited in the titular housing slum on the outskirts of Johannesburg.

Unlike the space invaders of most science fiction, these 6-foot-tall E.T.s (pejoratively nicknamed “prawns”) come neither in peace nor in malice. They are, we are told, the worker bees of whatever galaxy they hail from, accustomed to following orders, not giving them. And so they find themselves dazed and confused in their new home, while their flying saucer still hovers inertly over the skyline as if waiting for a jump-start from an intergalactic AAA.

A director of high-end commercials making his feature debut, Blomkamp (who also co-wrote the script with Terri Tatchell) milks his ostensibly fantastic scenario for all its allegorical worth. With its corrugated tin sheds and abject poverty, District 9 stands in for the township settlements where more than a million South African blacks still live without basic human services, two decades after the end of apartheid. But you don’t have to squint too hard to see the itinerant community as an all-purpose analog for the ghettos of Nazi Germany, America’s inner cities and all those other places where unwanted, powerless peoples have been herded, far from the backyards of the ruling class.

Blomkamp’s touch, however, is anything but heavy, and for most of its run time, District 9 whizzes by with a resourcefulness and mordant wit nearly worthy of its obvious influences: Invasion of the Body Snatchers, Dawn of the Dead and Starship Troopers.

As the movie begins, a wave of violent prawn unrest — not unlike the one that rocked South Africa’s real townships only last month — has prompted the good people of Johannesburg to crave even greater distance from their subhuman neighbors, and a forced relocation of all alien residents to a Guantánamo-style tent city known as District 10 has become law. Enter Multi-National United, a smarmy private military contractor that places the relocation in the hands of one Wikus Van Der Merwe (Sharlto Copley), a not-very-bright corporate lackey who also happens to be married to the boss’s daughter.

While MNU tries to decipher the aliens’ advanced weapons technology, affable but clueless Wikus yearns to surmount claims of nepotism. Then everything goes haywire, with the oppressor getting a crash course in what it feels like to be the oppressed.

District 9 is never better than in its first 45 minutes, as Blomkamp maps out the film’s social and economic realities via a grab bag of news reports, corporate videos and CCTV cameras. The aliens, we learn, can understand English but speak in their own indigenous language of grunts and clicks (making this one of two major releases this summer, along with Quentin Tarantino’s Inglourious Basterds, to feature subtitled dialogue). Meanwhile, inside the boundaries of District 9 itself, a cadre of Nigerian gangsters exploits the prawns by charging them exorbitant prices for black-market goods (including the canned cat food the aliens regard as a culinary delicacy).

Eventually, Blomkamp adds some straight dramatic scenes to the mix, around the point that the movie itself evolves into a somewhat more straightforward pursuit thriller — albeit one in which Wikus is both Dr. Richard Kimble and the one-armed man. Taking refuge in the very community he is supposed to be uprooting, the middle manager finds himself forming a tentative alliance with a science-geek prawn known by the anglicized name of Christopher Johnson, who may be his people’s only hope for a better life and who turns out to be the most humane, compassionate character in the District 9 landscape.

Even in the movie’s most conventional stretches, Blomkamp puts things across with terrific verve, using action and computer effects to enhance rather than trump story and character. District 9 was produced, with help from Lord of the Rings honcho Peter Jackson, for all of $30 million (about the average advertising budget on a standard Hollywood production). Probably only with an advocate like Jackson to run interference for him could Blomkamp have gotten away with a lot of it — the Johannesburg setting (aren’t alien invasions only supposed to happen in New York, Los Angeles or Washington, D.C.?), the dweeby hero, the thick South African accents, the subtitles. I can’t wait to see what Blomkamp does next, and I very much hope he gets even less money to do it.