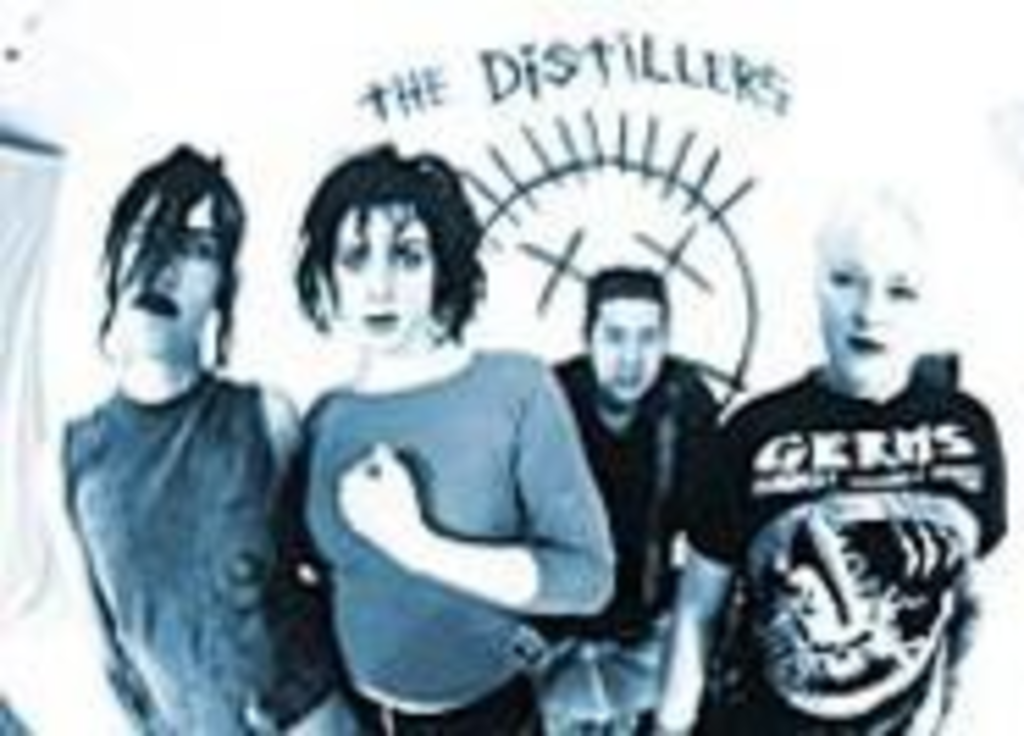 Distill Life“I’ve been running around like a fucking idiot,” The Distillers singer Brody Armstrong says between gaping inhalations. Her band starts its first headlining tour in two days, and Armstrong has, by her estimation, “five hours to do 10 million things.” She’s at the Epitaph Records office in Los Angeles (The Distillers’ label, Hellcat, is an offshoot of Epitaph), attempting to rein in her energy and sit still while speaking with some degree of lucidity.

Armstrong has no trouble expressing herself on The Distillers’ debut self-titled album, on which she wrote all 14 tunes. On such songs as “The Blackest Years,” “Oldscratch,” and “Red Carpet Rebellion,” she delivers poignant social commentary on domestic and international issues. Citing The New York Times and CNN as sources of inspiration for her lyrics, Armstrong says it’s essential to remain cognizant of current events. “You live in this environment, and if you don’t understand it, you’re fucked,” she explains. “You’re going to get blown away by a tornado.”

America serves as another muse for Armstrong, who is originally from Melbourne, Australia. Although her accent is fairly slight, it surfaces occasionally, as she pronounces “process” with a long “o” sound and “can’t” as if referencing the German philosopher Kant. “There’s a lot of shit going on here that you can write about, between politics, poverty, and the American culture, which is fascinating but sometimes really vulgar,” she says.

Musically, Armstrong’s earliest influences were such English bands as GBH and Discharge. However, her first band, Sourpuss, sounded nothing like these punk pioneers, instead opting for an indie-rock sound. Still, Armstrong’s distinctive throaty growl, which has earned admiring comparisons to Courtney Love, Joan Jett, and, due to her occasional slurring of phrases, Rancid’s Tim Armstrong (no relation), remained intact, although much higher-pitched — she was 14 at the time.

“That was before my voice broke,” says Armstrong, who is now 21. “Then there were a couple years where I sounded absolutely like a man from all the screaming.” Armstrong’s voice has settled into a comfortable medium, capable of melodic highs and intimidating lows. Meanwhile, the other Distillers — drummer Matt Young, bassist Kim Chi, and guitarist Rose Casper — crank out fast, streetwise punk that proves she’s left her indie origins well behind her.

The Distillers recently returned from their first tour, one of Epitaph’s Punk-O-Rama packages that paired the fresh-faced group with such veteran bands as The Dwarves and Bouncing Souls. Armstrong describes this initial outing as “awesome” but admits she has fears about the band’s upcoming club dates. “There’s no way we’re going to be able to fill up clubs,” she says. “We’ll probably draw five kids.”

The Warped Tour, which The Distillers will join for a string of dates, will doubtlessly be packed with fans each day, but this event presents a different set of worries for Armstrong. “It’s going to be so hot,” she says. “We’re hitting the geographical targets where it gets the hottest: Florida and then Texas. And you’ve got to prepare yourself mentally, because there’s so much hard work. After driving eight hours and loading in, by the time you get on stage, you’re fucking pooped.”

Pooped or not, The Distillers have several factors in their favor. First, and most important, they’ve got quality songs. Tracks such as “Idoless” and “The World Comes Tumblin'” offer some of the best female-fronted punk since Bikini Kill called it quits in 1996. Second, The Distillers do their fast-paced tunes justice with a live show that Armstrong promises will contain “lots of jumping around, screaming, and making faces.” Less obvious, but also essential, is the fact this quartet boasts a reliable mode of transportation — a rarity for an upstart punk band. The Distillers’ van has 20,000 miles on it, and Armstrong looks to push that figure well into the triple digits.

“I want us to have some longevity,” she says. “Make records and tour, and just keep doing that. I want to keep doing this until I’m 100 years old.”

Almost halfway to the century mark are some of the members of Bad Religion, which recently came to town sandwiched between punk’s pledge-class clowns, Blink-182 and Fenix TX. Although Armstrong says she wouldn’t necessarily turn down a spot on an attention-grabbing mainstream bill, she admits she would balk at being paired with either of these would-be comedic crews.

“It entirely depends on the bands,” she says. “I don’t think I would want to tour with Blink-182, because I don’t like listening to songs about farting and beer and chicks’ tits. And that other band (Fenix TX), they’re everything that’s wrong with punk rock today.”

Yet even in an era when backward-cap-wearing frat-rockers can describe themselves as “punk rock,” Armstrong says the term has real meaning. “It’s supposed to be about not giving a fuck and doing what you want to do,” she says, “but I think it’s just about staying true to yourself, and about the music. Punk rock music is so energetic and exciting.” She pauses for a moment to grasp for more defining adjectives, but instead her mind strays to urgent pre-tour matters, and she comes up empty. “I can’t think today,” Armstrong says apologetically, before resuming her breath-swiping run of errands. “I’d like to use some big words, but nothing’s coming out.”

The Distillers
With Sister Mary Rotten Crotch, One Damn Canadian, and Red Letter