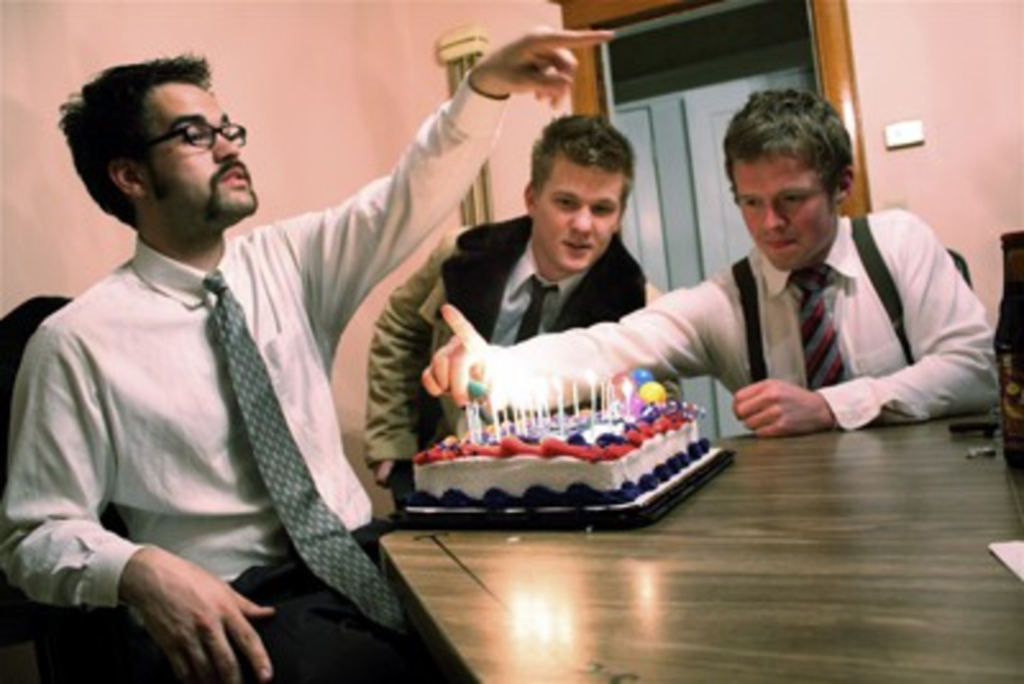 For a traveling band, a vodka sponsorship can be both a blessing and a curse.

The men of Antennas Up lived that dream — barely.

Bombora Vodka gave the Kansas City band two boxes of vodka to take on the road. “That was the drunkest tour we’ve had so far,” says bassist and lead singer Kyle Akers. “Because of open-container laws, when you open a bottle you have to finish it.”

Finish it could also be the motto for Antennas Up (originally called Distance to Empty), a band that has persisted for eight years despite two lead singers quitting at pivotal junctures. The band’s debut record as Antennas Up is out nationally April 14, and it’s proof that good things come to dedicated bands.

More focused and funky than anything Distance to Empty ever released, Antennas Up is brimming with radio-ready hooks and fresh production ideas. It sounds a lot like Jamie Lidell or Jamiroquai, if they’d grown up in the ’90s and absorbed more Beck and Radiohead.

There’s only one thing slightly confusing about the disc: It features a lead singer who’s no longer in the band. Vocalist Lonnie Coleman quit last August, forcing the remaining trio of Akers, guitarist Bo McCall and drummer Ryan “the Ryantist” Whitehouse to do some soul searching.

“He quit the day we were listening to the masters,” Akers recalls. “We all liked the record too much to let it go, so we were like, ‘F it — let’s put it out.'”

The decision was made easier by the fact that Coleman only wrote the lyrics to one song on the disc and none of the music. Akers had already tracked his vocals for most of the tunes before Coleman entered the picture. Coleman performed with the group for nearly a year before putting in his two months’ notice — a requirement of Antennas Up’s LLC contract (filed under the name Plastic Artifice Co.). That put Coleman in the awkward position of having to spend two months on the road fulfilling obligations for a band he was quitting.

“He just had his headphones on for the whole tour,” Whitehouse recalls with a laugh. “He did a great job onstage, though. He was professional doing the job that he had to do.”

If such contractual duties seem outside the realm of most local bands, consider that Antennas Up is no amateur act when it comes to the music business. The group’s members enjoyed a run as full-time musicians from 2006 to 2008, bankrolling their primary passion for creating original music by playing in a cover band called DTE (after Distance to Empty’s initials). DTE hit the road for 100 to 150 dates a year, approximately two-thirds of which were cover shows.

“DTE was kind of the training wheels,” McCall says. “We saw what worked live and what didn’t. The dancey stuff worked best, and we always loved playing it.”

One thing that didn’t work, they eventually realized, was the proggy material comprising Distance to Empty’s all-original sophomore LP, Relaxcitement.

“It was like Tool that was not quite good enough to be Tool,” Whitehouse says. “It lacked focus. There were lots of time changes, so people would start dancing and then they’d be like, ‘Huh? We’re in seven now?'”

McCall has an even more succinct explanation of his band’s evolution.

“The music now is a lot less shitty,” he says with a completely straight face, cracking up his bandmates. “We decided shitty wasn’t quite our direction.”

While the music may have changed, Antennas Up is still taking advantage of the groundwork they laid with Distance to Empty. The group is heavily involved with the college touring circuit, thanks to showcases they performed for the National Association for Campus Activities (NACA). The rather hilarious audition process amounted to performing a 15-minute set in the wee hours of the morning for NACA talent scouts.

“You’re performing alongside a list of stars like Lance Bass and Mr. Belding [Dennis Haskins] from Saved By the Bell,” McCall says. “He still walks around with a Mr. Belding jacket, and he’s gained about 150 pounds. We ended up at a bar where he was doing karaoke, and he was like, ‘This is for everyone who went to Bayside High!’ Then he sang ‘School’s Out for Summer.'”

Antennas Up did its own version of karaoke last October when the group enlisted a different singer for each song in a performance at the Riot Room. Singers from Ha Ha Tonka, the Abra­cadabras, Aubrey, Tide House, and Company of Thieves took turns singing the songs from Antennas Up. It was one of the brighter moments in a tumultuous year that also included a van breakdown and a foreclosed rental property.

Things appear to be looking up, however, with a two-week tour on the horizon and Akers firmly ensconced in the lead-singer role.

“From time to time, I’ll feel pressure, but I’ve kind of abandoned that,” Akers says. “I like it a lot more because the energy is the same between the three of us, and there are no question marks anymore.”

If they can just lay off the vodka, Antennas Up might be headed for a breakthrough year.