Disconnects between police training and policing threaten us all, including officers 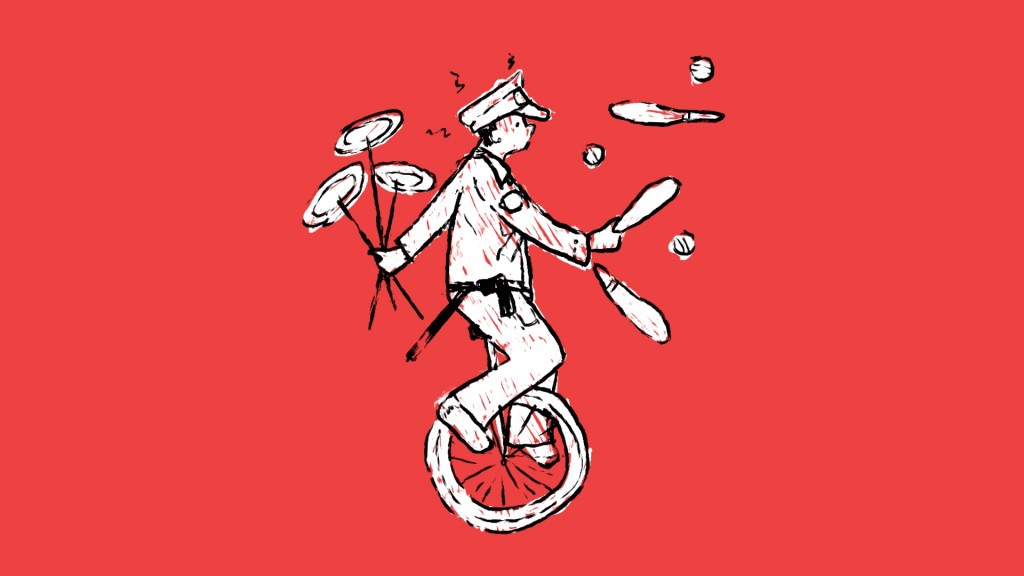 In Kansas City, incoming police officers spend approximately 1,000 hours training in a police academy for a lifetime career of policing. Of those hours, less than eight percent are spent on interpersonal perspectives, while nearly 73 percent are split between combat, weaponry, and defense training. The unequal divide between community engagement and conflict tactics has civilians and activists demanding change.

Throughout history, police officers have been seen as the vigilantes fighting crime on the streets, equitable to superheroes and public saviors. This narrative was reinforced by the entertainment industry, where police officers were showcased as warriors in shows like Live PD and Cops. The career is chalked up to be one of thrill and danger, with police officers being the peacemakers in a world of chaotic criminals.

“It’s not an office job, it’s something that has a little excitement,” says Ken Sissom, director of the Johnson County Regional Police Academy. “I always thought I’d be good at it. Probably influenced a lot by television.”

Yet the career of being a police officer is unlike what it’s portrayed as. Police are expected to be mental health counselors, conflict navigators, traffic patrollers, law enforcers, report writers, and criminal investigators. All of this, and more, is expected to be learned in roughly seven months for members of the KC Police Department.

Recruits train at the Kansas City Regional Police Academy for approximately 995 hours, a number that fluctuates with each class. These 32 weeks are split between legal studies, interpersonal perspectives, technical studies, and skill development, according to the academy’s curriculum.

Eighty-two hours are spent on legal studies. Interpersonal perspectives make up 78 hours, the least of the four categories. This section includes 32 hours on domestic violence, nine hours on cultural diversity, and one hour on minority relations, according to the KCPD curriculum.

“It’s not an office job, it’s something that has a little excitement,” says Ken Sissom,

“Our officers receive some of the finest law enforcement training anywhere in the country,” says Gregory Doll, the director of the KC Regional Police Academy. “Not to say that we’re perfect; we’re always looking for ways to enhance our training. In all of our practical, hands-on training, we’re always looking how we can improve and adjust to whatever the changing needs are.”

Following the death of George Floyd by Minneapolis police on May 25, groups of local activists have been demanding police reform. But for Justice Gatson, founder and director of the Reale Justice Network, problems within the police force extend past what can be taught during the police academy.

“We can’t train people into that. They have to come with a set of values that say, ‘All of these folks matter, and every single person matters.’ I don’t think they can train their way into or out of this,” Gatson says.

Training exercises at the KCPD Regional Academy are continuously updated and reflect current events, as reported by KSHB. One updated exercise involved a situation similar to the death of George Floyd, which officers say they hope will improve “ethical decision-making,” as told to KSHB.

But not all academies are created equal. State-by-state requirements create training discrepancies across state borders, evident in the differences between Kansas and Missouri.

“The number of hours that we train is adequate for the area that we police,” Sissom says. “If you want to compare our police department academy to the academy that they give at the LAPD, their police academy is another two to three months longer than ours. The level of training they get is much higher; the environment they’re going to be working in is much different than ours, and I would say they need a longer academy than ours for that reason.”

The differences in state requirements mean police officers across the U.S. aren’t spending the same amount of time in training. For Doll, who is also the Major of the KCPD Training Division, his training in KC outshined his previous training in New Jersey.

“Having gone through a police academy that was well respected in the state of New Jersey, and then coming through this academy less than two years later, I felt I was much more prepared through my training here to go out and be an officer on the street than I was there,” Doll says.

To become an officer, Kansas requires a minimum of 572 hours in training. Missouri requires 600 hours. KC Regional Academy exceeds this, with officers training for an additional 400 hours, while the Johnson County Regional Police Academy adds 72 hours.

The average basic training program in the U.S. lasts 840 hours, or 21 weeks, according to a 2013 Bureau of Justice Statistics study.

Comparatively, cosmetologists are required to train for 1,500 hours in a certified school to receive their license in both states.

Missouri’s requirements are decided by the Peace Officer Standards and Training Program, which falls under the Missouri Department of Public Safety. The Kansas Law Enforcement Training Center, which is a unit of the University of Kansas, outlines the major requirements for the six satellite training centers across Kansas.

The 16-week program at the Johnson County Regional Police Academy is one of six satellite centers. Their curriculum is broken down into 18 different courses, including 18 hours in communication skills, 92 hours in criminal investigations, 41 hours in crisis management, and 64 hours in firearms, among other courses.

Apart from the state requirements, recruits at the JCRPA spend additional time training in chemical agents, crowd control and civil disorder, and interaction with special populations, among other categories. These recruits spend 47.5 percent more time in defense tactics than the state requires, according to the JCRPA curriculum.

“We train them the best that we can in terms of the general circumstances that we have, and then it’s up to them to go out and apply it appropriately,” Sissom says. “All we can do is give them the tools, they’re the ones that decide when and how to use them.”

Budget concerns impact the length of training at area academies. The KCRA and JCRPA train between 20-60 recruits in each class, split into three classes a year. Recruits in training are paid full-time salaries by their hiring agency.

“Could we train them more if our academy was longer? Of course. We could expose them to more things, but at some point it becomes cost consideration. They’re being paid full salaries while they’re here, and they are needed to work out on the streets,” Sissom says.

Instead of focusing on how police can be reformed, Gatson says she wants more money to be funneled into community resources, like mental health counseling. She says community resource workers, like herself, are more knowledgeable about available resources that can better serve the community than law enforcement officers.

“Many officers get significantly more than that, that’s the minimum requirement to be able to maintain your license to be a police officer. At the academy, we’re constantly having outside training,” Doll says.

Continuing education may help in filling the gaps for recruits who don’t enter the force with a relevant degree in their background. While the majority of those hired have an education in criminal justice, some recruits don’t, Doll says. Former careers range from construction workers and electricians to teachers and retail employees.

Doaa El-Ashkar, a public information officer, was a customer service representative for AT&T and Delta Airlines before she joined the KCPD. She says there’s a benefit to having people from different backgrounds working together in the police force.

“There’s a lot [of officers] here that have degrees in criminal justice. But that’s not a prerequisite. In fact, you probably want varying degrees because that’s what makes it diverse and that’s what has everybody bringing different strengths to the table,” El-Ashkar says.

Those without a degree may struggle with technical aspects of the job, Doll says. When he entered the force in 1988 with a Bachelor’s degree in criminal justice, he says most officers didn’t have a degree.

“The job has become more technical from when I first came on,” Doll says. “We didn’t have computers when I came on, and we didn’t have in-car video cameras or all of the technical stuff that officers use today.”

“Let’s just divest from things that haven’t been working in our communities, and let’s invest in things that do,” Gatson says.

“That doesn’t require a college degree, but it certainly requires knowledge and experience to be proficient with those things. If you don’t have that in your background, you’re going to be behind the curve because you’ll be exposed to a lot of training and concepts that are totally new to you,” Doll says.

Another option for officer training is vocational training at area colleges. At Metropolitan Community College’s Blue River Police Academy, students don’t have to be hired by an agency to go through the academy.

Instead, they pay their own way to earn a certificate, which is not the same as a degree. This also allows students to skip the vetting process from a hiring agency, an action outlawed in Kansas.

“For someone to sponsor themselves to come to an academy, they would have not undergone a background investigation or any kind of a vetting process,” Doll says. “Whereas, when an agency hires and sends a recruit officer, they’ve conducted a thorough background check and investigation on that individual before they sent them to our academy.”

MCC’s full-time academy is also shorter than any other area academy, as students meet the minimum requirements of 600 hours of training. Additional credits are required to earn a degree in police science from MCC, according to MCC’s website.

The problems that have infiltrated the police force through training have led Gatson to want a fresh start in terms of policing, she says.

“I think it just needs to be burnt down, honestly. We need a do-over,” Gatson says. “We need to get to the moment of truth, and we need to put people in positions that are actually going to hold police accountable.”

“Until we get there, there really is no sense in saying ‘How can we be better?’ and ‘How can our training be split?’ because, at the end of the day, if they’re willing to operate with this blue code of silence, and they’re willing to continue to protect each other when they do bad things, then it doesn’t matter about the relationship in the community. It’s a facade.”

“Police need to move away from using punitive measures as a way of correction to doing something that’s much more holistic,” Gatson says. “Being punitive to someone who’s poor and can’t afford to pay the ticket, it’s just never going to help them, ever.”

“We have people who are police officers who don’t care about the communities they serve. They can’t say Black lives matter because they don’t believe it. They can never have a good relationship with Black communities,” Gatson says.

By definition, a police officer is someone responsible for maintaining public order and safety, enforcing the law, and preventing crime. While police forces may have lost sight of this role, Gatson says we need to remind them of their true role in society.

“Police need to remember, and we need to remind them, that they work for the community,” Gatson says. “I want to see us get to a place where police isn’t used as a weapon the way that it is now.”