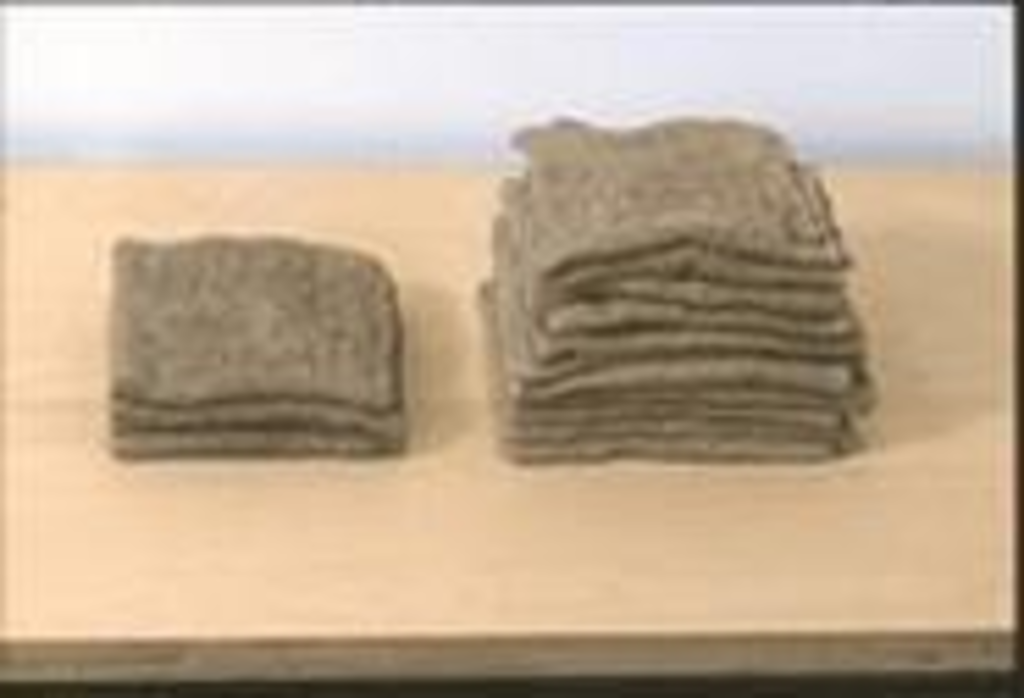 Human lives are filled with banality. Thousands upon thousands of large and small tasks must be completed in order to maintain domestic harmony. Stack the dishes. Sweep the floor. Pour the water. Replace the soap. Fold the towels. Repeat until death. To a monk, each task is an opportunity for enlightenment. To most everyone else, it’s a chore, forgettable and forgotten as soon as it’s accomplished — sometimes even before. What becomes of those myriad moments after we’re gone? After the last towel is folded, who comes to collect it as a souvenir of our lives? Sculptor Marcie Miller Gross does, and she doesn’t even need to know us by name.

Gross’ disquieting exhibition, To Fold, at Joseph Nease Gallery, speaks of vital issues primarily because it balances the abstract with the tangible, and minimalism with fertile narrative. The two issues talking loudest are those of transformation and absence. Three sculptures use soiled bath towels, hand towels and/or washcloths, while the fourth uses hospital towels to give voice to people now absent, the nameless or forgotten who pass in and out of the world. While the first three sculptures refer to domesticity and cleansing, the hospital towels imply sickness and death — not so much cleansing but mopping up.

Gross says she acquires most of her towels from thrift shops and estate sales. “Estate sales are interesting to me as this residue of a household, fifty or seventy years’ accumulation, the evidence of a life — although there is sort of a strange kind of voyeuristic quality of buying things from someone’s household.”

This same sense of voyeurism begs her viewers to confront what is both absent — human life — and what is present — the residue of that life.

Looking at “Trace,” for example, is like entering a room after all the party guests have gone, though echoes of their conversations remain. This is a large-scale installation of towels and washcloths folded and arranged in intimate groups on two long, low shelves of clean, smooth plywood. The towels and washcloths are soaked and encrusted in a fawn-colored soil and plaster mixture that pushes their identities away from fabric — toward rock. It’s a wonderful transformation. Textures vary from the soft lumpiness of aggregate to the smooth plains of sandstone. Folds and strata suggest the earth’s upheaval, and some towels retain vestiges of woven designs, like leaves, evoking fossils and the exposure of the past.

“My work is informed by family history, specific to the Midwestern landscape,” Gross says, “with previous generations, living and dying in a place, and the resonance of that place.” In “Trace,” she says, she’s considering issues of presence and absence but is “trying to open it up more universally, broadly to a collective memory.”

Arrangements upon the shelves vary, from two folded washcloths placed beside one folded towel to a folded hand towel upon a folded bath towel. Also, the wall above the second shelf is hung with folded towels grouped like enormous Braille letters, as if there were some important message sent, some life-or-death code we cannot break.

Although the words “towel” and “washcloth” suggest domesticity and cleanliness, Gross transforms the potential function of these objects. Each is, in her words, “a hybrid of time and place … revealing something greater than itself.” Imagine towels and cloths that have never been washed clean of the human skin and dirt they absorbed, growing fatter over the years so that at the end of one’s life they became the memento mori for the deceased’s survivors.

Gross’s work “Endure” hints at the possibility. Ten earth-laden bath towels form a flat-topped pyramid upon an old white chair. The chair, too, appears to be second-hand, scarred and dirty, with a crack in the seat as if the weight of the towels — of lives — were too substantial to bear. This is no invitation to sit, for the corporeality of the towels becomes a tangible presence, a surrogate for those who are now absent.

Another large-scale work, “Accretion,” insinuates a similar message, though the means by which Gross sends it depart from the intentionally soiled works. From a distance this piece appears as a lovely minimalist installation in five parts: “Divide,” “Separate,” “Balance,” “Fold” and “Stack.” These subtitles refer to the processes Gross goes through after collecting the towels (or that anyone may go through in accomplishing domestic chores) and are somewhat literally illustrated by seemingly clean white towels on five low oak benches. For example, “Separate” consists of towels folded lengthwise, stacked to about eight inches high, then draped over opposite ends of the bench. “Accretion” makes it easy to understand Gross’ emphasis on the “everyday” in the process of making and thinking about her work. She says she’s “drawn to the simple, meditative and often mundane rituals of daily life.”

But there is another layer, so to speak, to this seemingly abstract installation that both relates to and diverges from the soiled works. Although the hospital towels in “Accretion” are apparently washed, close inspection reveals the unbleachable stains of human effluence: the blood and shit and byproducts of disease.

“The work with the hospital towels is really a departure for me,” says Gross. “Rather than transforming through another substance [like soil], I am transforming through a new context, using the inherent tactile properties and the history of the used towels to convey as much as I can, as simply as I can, while leaving room for the viewers’ associations and responses.”

Like “Trace,” “Accretion” elicits a two-fold response: Not only do we detect the absence of others — in the latter case those who, in one way or another, confronted their own mortality in hospital rooms — but also our own absence, a sense of having arrived too late. Standing amid the pale benches and bleached towels and white gallery walls is like standing in a hospital room after the patient has died and the nurse has already remade the bed. More unsettling is the number of hospital towels used in the work. Each represents a moment — probably traumatic — in the life of the sick or dying. For each towel is a person absent, a story we will never know.