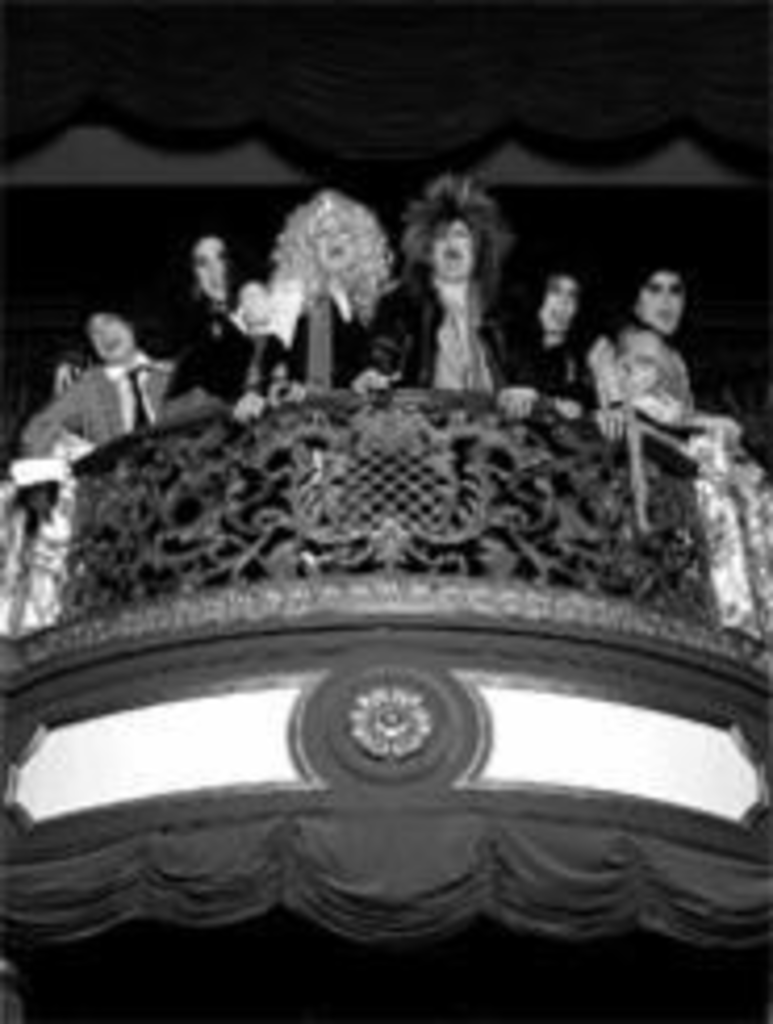 It’s almost certain that 1987’s The Lost Boys will top any list of favorite vampire films of the ’80s, but I recall another from the same year that made a stronger impression. Kathryn Bigelow’s Near Dark wasn’t as successful, but it had indie hotties such as Bill Paxton and James LeGros, vampires dressed like bikers, and a ravishingly beautiful scene in which bullet holes sprayed across a motel wall let in shafts of piercing, burning sunlight.

Oddly, though, Near Dark‘s soundtrack was a musical score by those ageless progenitors of soothing electronica Tangerine Dream rather than the biker-vampire-friendly rockers that seem tied to the era: AC/DC, Motley Crue and Guns n’ Roses, for example. It’s that seemingly natural pairing — hair metal and the blood-sucking undead — that are the inspiration behind Ron Megee’s new Late Night Theatre epic, Rockula. Subtitled The Hair Band Vampire Musical, the show’s a bloody gas — a raucous, enjoyably earsplitting chorus of cultural feedback.

Rockula is also the name of the band whose colorful history unfolds before our eyes like an episode of VH1’s Behind the Music crossed with an Anne Rice novel. Narrated by the bitter ex-frontman, Deacon (Darryl Jones), the biography opens with the current band members preserved like collectible goth dolls in shrink-wrapped coffins (wonderfully designed by Jon “Piggy” Cupit). Like a vampire story would tend to do, the play rewinds hundreds of years (to 1738) to introduce the first bloodsucker in the band, Nigel (David Wayne Reed), the egomaniac who took Deacon’s place at the microphone.

Rockula’s other members may not have roots as deep or storied as Nigel’s, but they give the overall package its teeth. There’s the sister act formerly known as Colon (orchestrated with Heart’s “Crazy on You”), which includes Fanny (Cupit) and her formerly obese sibling, Elkie, played exuberantly by Megee as if he were the bizarre stepchild of Sid Vicious’ murdered girlfriend, Nancy Spungen, and a Cockney music-hall chanteuse. In a terrific musical number accompanied by Ram Jam’s “Black Betty,” it’s revealed that these girls aren’t the age they seem, either, having started performing in the 1920s.

Then there’s Bobbi Boi (Gary Campbell), the teen-prodigy drummer dressed in short pants like AC/DC’s Angus Young and pounding those skins with a lot of skill for someone with one arm. Rounding out the band is Bert, the kind of unruly musician who, in several vivid ways, always seems hungry. (In the show, hunger is meant to evoke both The Hunger, the lesbian vampire movie with Susan Sarandon, and that familiar rock-scene state of wretched excess.) Bert is played by Brodie Rush; he can usually be spotted with his band, Be/Non, yet he effortlessly assimilates into his Late Night debut as if to the old bank building born. Completing the cast is Shannon Michalski, the sole female in the show, who plays, among other roles, a stuffy, banal BBC reporter (asking questions like “What’s your favorite color?”) and a doomed bellboy.

The strength of the show isn’t in its narrative arc, which vacillates between your standard, loyal rock bio and something about rampant blood lust. No problem; the piece works instead as an homage to the music (sloppy guilty pleasures like “Dirty Deeds Done Dirt Cheap”) and the era (including a Lost Boys tribute), and how the two combined into one decadent valentine that seems weirdly innocent today. Megee frames the period as a portrait of something precious and nostalgic. In the last beats of the show, we’re reminded that, for a time, metal was dead, permitting alternative bands such as Nirvana that ended up having their own darker death wishes.

The cast — dressed to the nines in spandex, lace and ruffles by costume designer Georgianna Londre — uniformly grasps the tics and eccentricities of their characters — Elkie’s constantly darting tongue, say — but also gets their sorry souls. Reed’s Nigel, for example, is the worst example of a star of limited appeal who, in his mind, shines like a searing, bright supernova.

What’s genuinely funny throughout is the way the characters play off one another’s quirks. In the second act’s opening scene (a rehash of the horrible bus crash that closes the first act), Megee’s Elkie maintains that she’s the only member of the band who kept her cool. The participants have their own interpretations and, subsequently, Elkie repeatedly gets slapped upside the head as the others correct her take on it. You know the show’s doing what’s it’s supposed to do because we feel her pain but embrace the sting.