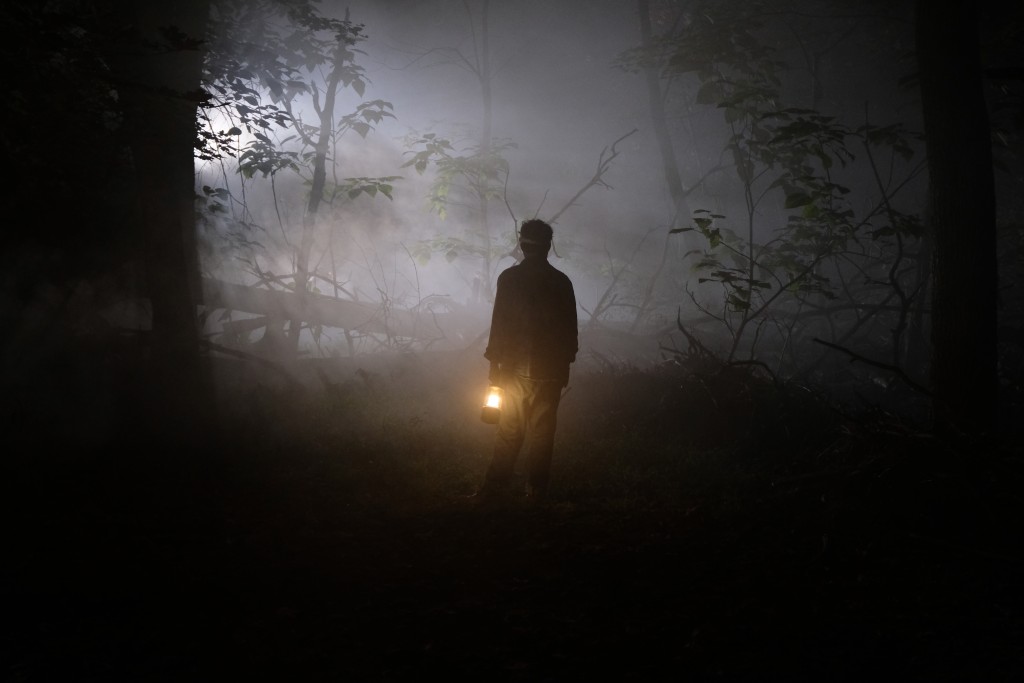 After a decade producing such films as the thrillers Buster’s Mal Heart and You’re Next, along with horror films like We Are Still Here and Starry Eyes, Travis Stevens made his directorial debut in 2019 with the sticky headspin which was Girl on the Third Floor.

He followed it up with the modern vampire tale with a side of women’s empowerment that was Jakob’s Wife in 2021, and now comes A Wounded Fawn, wherein “a serial killer brings an unsuspecting new victim on a weekend getaway to add another body to his ever-growing count. She’s buying into his faux charms, and he’s eagerly lusting for blood. What could possibly go wrong?”

It’s a 16mm blast of blood, Greek goddesses, and internal reflection which continues the themes seen in Stevens’ first two outings, while expanding them into something which is at once both grander and more intimate.

We spoke with Travis Stevens via Zoom about A Wounded Fawn and the process of bringing the movie to life. 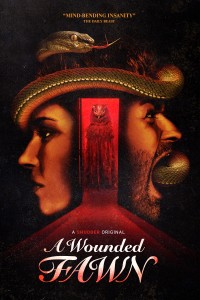 The Pitch: One of the things I enjoy about the films you’ve written and directed is that these movies frequently have a case of men getting their comeuppance. Is that a conscious decision?

Travis Stevens: It’s a mixed answer. The universe seems to have put opportunities in front of me that thematically, those are a part of the stories. And then on the other hand, I found it pretty amusing to do a trilogy of films about men learning lessons. Maybe I’m manifesting it or maybe the universe is saying it. I feel like my next one, maybe thematically I’ll be moving on to some other areas to explore but yeah, definitely, there are components in the first three films that are–amusing to me–similarities.

Where did your interest in Greek mythology come from? This can’t have been a new thing, given how much it suffuses A Wounded Fawn.

Well, thank you. I would actually give that credit to the, the screenwriter who wrote the original script that was sent to me, Nathan Faudree. I had heard of the Furies, but I wasn’t aware of them as literary or Greek myths. I think early on in the movie I was like–because I had done some movies about shitty men–I was like, “Okay, what’s my way into this to keep it interesting for me?” and the idea of focusing on symbolism was interesting.

So, when I was sort of researching the Furies–sort of seeing how they were represented, seeing what they represented and what they symbolized to the audiences at the time in either the play being put on or the painting being done–I was like, “Okay, that’s a way into this.” My takeaway was, “We have these goddesses of vengeance who are not there to kill the bad guy. They’re there to get the bad guy to atone,” and that felt like something that was really interesting for 2022–this idea of what we want is accountability, not revenge.

I’m not a classics major. I didn’t go to Oxford. I went to a little hippie school in Vermont. Certainly, this story in somebody else’s hands maybe would have even more details, but for me it was watching different iterations of plays, looking at different paintings, and then trying to find and cherry-picking what I liked from those.

As you’ve moved from producer to director and writer, folks from previous movies pop up in each successive one. It’s not a troupe, per se, but there are quite a few familiar faces. Is it just that you like working with these people?

Maybe this isn’t true, but I think of it as assembling the dream team. If they’re available, you want to because you have a shorthand with them and you have a trust with them, and you know their capabilities, and the hope is that at the end of each movie, it has been a victory for everyone who’s worked on it, so that when you’re doing the next one, they wanna work on it. You wanna work with them again. Sometimes reality makes it not possible to get every single person, and so you’re working with new people.

I think the thing that I look for in the people that I work with is their capability, not what their experience has been. Whether it’s an actor or otherwise. The costume designer on A Wounded Fawn had never costume-designed a movie before, but his art is making sculptures. He would grow mold and make fabric out of it and make sculptures out of it. That approach to making stuff, I was like, “I need to work with this cat because he’s like a true artist even though he doesn’t have a long resume in film.” So yeah, I mean, vibes? [laughs] People that you vibe with and then you like working with, and you keep working with as long as it goes well. 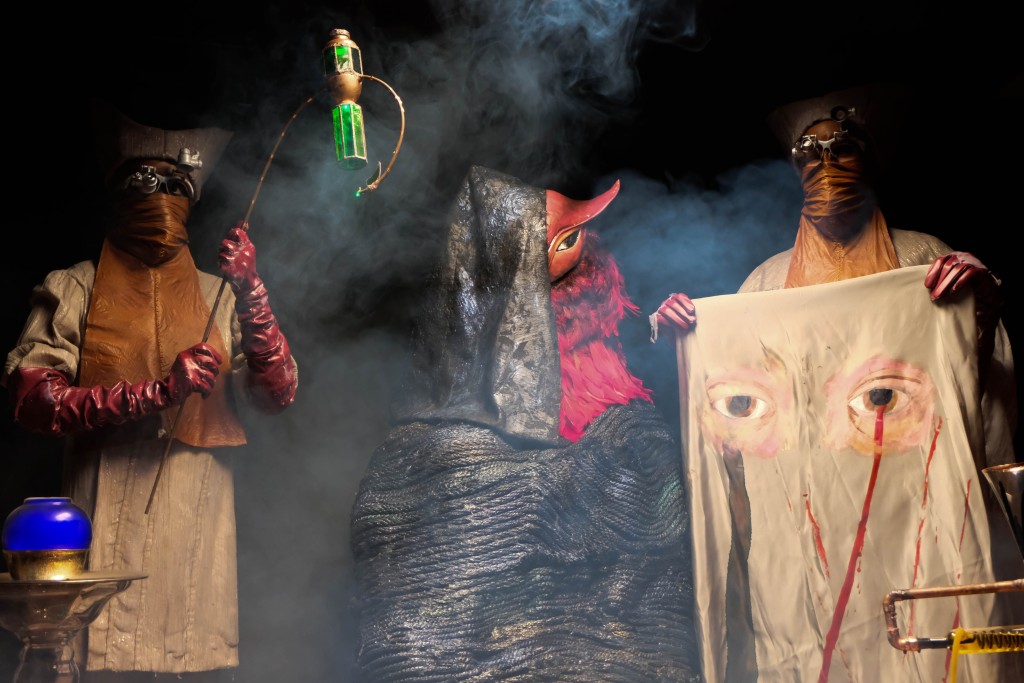 You did not just jump into filmmaking. You had been producing films for a solid decade before you made Girl on the Third Floor. What lessons have you picked up from the folks you worked with along the way?

I would say I learned different lessons from different filmmakers ’cause they have different things they’re interested in, different things they’re good at–maybe some things that they’re not so good at. Sarah Smith, who I worked with on Buster’s Mal Heart–I didn’t realize you could just be pure creative vision and not handicap yourself with reality. When she sent me that script, it wasn’t even in script format. It was a 30-page notebook with drawings and poetic phrases that she wanted to incorporate into her story. Just on a fundamental level, I was like, “Oh, we can do that? I didn’t know you could just be literally pure art school approach to it.”

Some people are more on the technical end, and I end up being just in awe of their ability to just think on purely technical levels. There’s always something. I mean, I guess that’s life in general, right? If you’re standing in line at the DMV, there’s something of value you can get from it if you engage with the world with an open mind and an open heart.

Does it help that you have worked with people who have been in the industry and, specifically, the genre, for decades? You’ve worked multiple times with Barbara Crampton and her width and breadth of knowledge is expanding even now, as she moves into producing and things like that, so I can only assume that when you’re working with people who are still expanding their skillset, it helps you to up your game as well.

I think I approach everything like I have so much to learn. I approach everything with that sort of wide-eyed, “Let’s experience this and figure this out together.” I love listening to Barbara talk about how it was back in the day, not because she experienced that and only knowing that, but when she brings that to what she’s doing now, there’s an interesting dynamic where she’s like, “And now it can be like this, and it doesn’t need to be that way.” That’s fascinating! On Jakob’s Wife, when we’re sitting there trying to present her work in a different way, give her a different type of role to play, in a different showcase of different acting chop, if it were any other actor in that, in that moment, they wouldn’t have that same sort of history to play with.

Again, I think it comes back to whoever you’re working with. If you’re engaging with them–not just about the job that’s at hand, but what they’ve done before and what they’re capable of doing–then it gets really interesting. 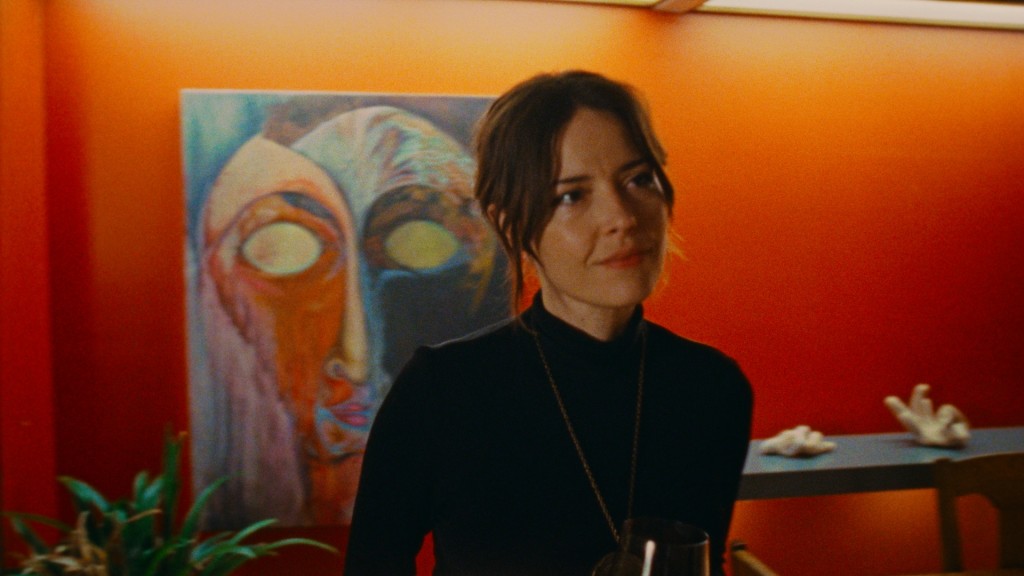 The visual style on A Wounded Fawn is different than that of your previous two films. Is that because of the 16mm film on which it was shot or was that born out of this being a smaller, COVID kind of production?

I think it started because this was territory that I’d explored narratively, thematically. I was like, “I need to find a way to differentiate it, creatively, and aesthetically was the way I wanted to do it. That led to exploring symbolism a lot more than the previous films. That was the guiding light, then that opened up all these set pieces and all of these creative decisions on really pushing the visuals into a more exaggerated, surreal world than I had done in my previous films. It was a lot more fun. I think it allowed me to be slightly less overt in what the movie’s saying. I mean, it’s still pretty damn clear, but less speechifying because we can let the imagery do it a little bit more.

I think the film was a part of that component. It’s like,” We’re gonna make a movie in the style of Jodorowsky’s El Topo or Holy Mountain”–not that we’re anywhere near that sort of level of greatness–“Every aesthetic decision we’re making, let’s try to bring that in.”

It’s a story that’s broken into two halves, and the first half is we’re experiencing it through Meredith’s eyes, and the second half we’re experiencing it through Bruce’s eyes. Being able to bring Bruce’s delusions to life in a really wild way, I like the idea that they’re tactile. It feels real world, it feels like you’re watching a play on a stage. It’s not heavily-reliant on CG and more of a digital fantasy. It’s like, no, that is real fabric blowing in a real environment on a real actor in a real space. That seemed like an interesting sort of creative thing that we hadn’t in a while.

What’s it like, working with a company such as Shudder, for whom horror and streaming is their reason to exist?

I’m so glad you asked that question because, obviously every filmmaker just wants an opportunity to make a film, right? But when you can make a movie with a partner you’re not having to convince or explain what the thing is, they have the same taste level, the same sort of references, that same knowledge–maybe even more–it just is a different experience.

On one hand, they understood what the project was based just on the material we sent them. There was no “Explain it to us.” In the movies that they’d made with other filmmakers, too, that are in different subgenres, they have the same sort of confidence in because they’re working with filmmakers that they believe it. The trust is already there right from the get go.

Noah Segan’s movie, Blood Relatives, and Joe Begos’ Christmas Bloody Christmas, and Jason Eisener’s Kids vs Aliens are all very different styles and movies, but they all are 110% what they are. Nobody at Shudder was like, “Can you soften that?” or “Could you make that a little bit more like this other thing?”

No, they’re adventurous eaters and they order strange things, and that’s what they want to eat. They’re not pouring ketchup on the movie, making it more palatable. They’re the fucking best and I am so grateful to have been able to make a couple movies with them.