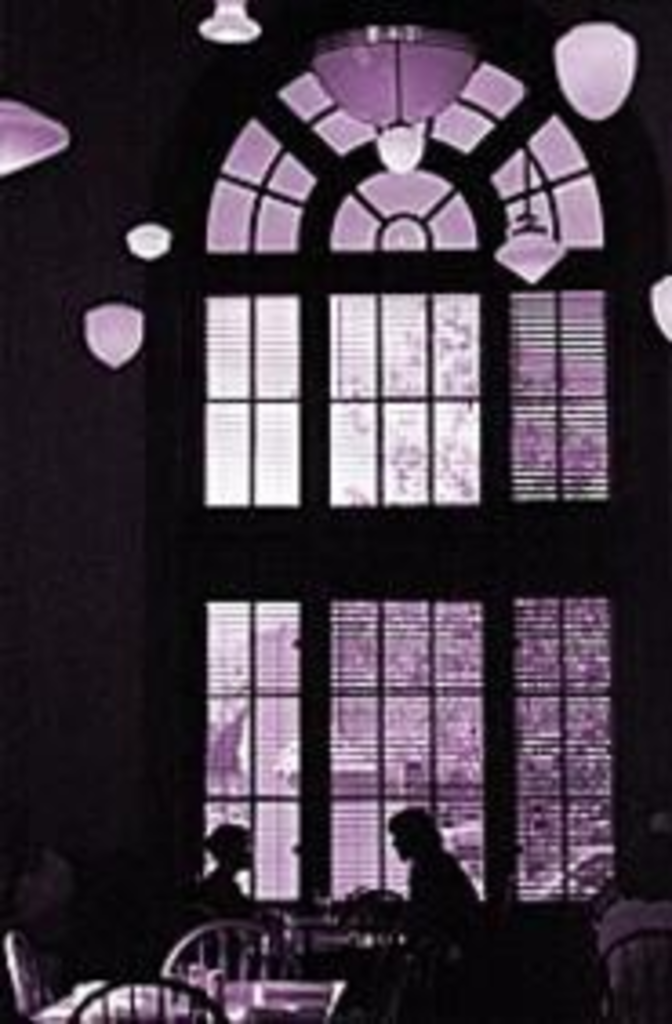 From the turn of the last century until World War II, metropolitan banks and their small-town contemporaries were built — like first-run movie theaters — as if they were palaces or temples. Patrons found it reassuring to deposit their life’s savings in buildings modeled, vaguely, after the Parthenon or the Temple of Zeus. Today, when new bank buildings are indistinguishable from fast-food restaurants, the old buildings seem even more sensational.

In Lawrence, the former Merchant’s National Bank Building has been artfully transformed from a staid financial institution into a noisy, energetic, and high-spirited bar and restaurant. Teller’s interior is graced by high ceilings and huge, Palladian-style windows, while modern bathrooms are tucked behind thick, bulletproof, earthquake-proof steel in the vault constructed by the Mosler Safe Company.

The menu is equally creative, with salads, pizza, and moderately priced pasta dishes sharing the single-page listing with fancier items, such as a beef filet stuffed with brie or caramelized scallops on a bed of saffron-scented risotto.

But the food, like the ambience, is cleverly casual; maybe because it’s located in a college town, Teller’s is more of a pricey bistro than a fine-dining restaurant. It’s a lively joint with uncloaked tables and utilitarian wooden chairs, although the napkins are cloth and the young servers whirl around the place in white shirts and ties. And no one was dressed up the evening I came in for dinner (except for one of my companions, Wendy, who is such a clothes hound, she wears a hunting outfit to set a mousetrap).

Since the blue-painted ceiling is high (and afloat with dozens of mismatched milk-glass light fixtures) and the floors are wood and tile, sounds bounce all over the hard surfaces, and the noise level can be daunting. Shortly after our group was seated at a table in the center of the restaurant, we found ourselves hostage — at least aurally — to the loud mouth of a man at a nearby table, who never stopped talking (“I tell you,” he screamed at his companions, “China is trying to take over the world!”). We were thrilled when his dinner arrived and his high-pitched monologue stopped long enough for him to stuff his face with duck salad.

Starving, I immediately asked Joel, our personable waiter, to bring a couple of appetizers: a tart of mushroom and leek and the roasted head of garlic served with fontina cheese and slices of French baguette. “I’ll be right out with some bread while you wait for the appetizers,” he said before dashing off.

The bread never did arrive, despite our constant requests. Wendy asked for bread with her salad and was told, “It’s still in the oven.” That was also Joel’s answer when Bob asked for bread with his dinner. “It’s the slowest-baking bread in the history of Kansas,” said Wendy, who threatened to keep asking for it even when the dessert menu appeared. And she kept her word, although Joel seemed unfazed and shrugged: “It’s, uh, still in the oven.”

For all I know it’s still baking, right next to the robustly flavored roasted head of garlic, which did arrive at the table. This excellent autumn appetizer was served peasant-style, in a big white bowl with slices of grilled baguette, creamy melted brie, and slices of tart apple. The mushroom and leek tart was more of a turnover, actually, arriving as a square puff of flaky pastry in a pool of red pepper sauce. I added a salad, one of five Teller’s salads ranging from $6 to $8, although smaller versions of each may be ordered, with a meal, for a reduced price. Not that reduced, though: A half-order of the fine spinach salad, with goat cheese, pine nuts, and a vibrant vinaigrette, costs more than half the regular price, and the same goes for a salad of spicy leaves of arugula, candied walnuts, pungent gorgonzola cheese, red onion, and raspberry-balsamic vinaigrette. On the other hand, I felt I had gotten a bargain with my small version of the $6 house salad, dressed up with fat marinated artichoke hearts, Maytag blue cheese, and a brisk balsamic vinaigrette for $2.

The menu sports nine pasta dinners and seven entrées — four meat, three fish — as well as a couple of nightly specials that Joel recited with about as much enthusiasm as he’d shown for bringing that bread. The dining room was so noisy, I couldn’t hear him anyway. Wendy, a vegetarian, ordered the meatless tortellini arrabbiata, Bob chose fettuccine carbonara, and Eddie selected a grilled Kansas City strip with wild mushrooms. I wavered between several possibilities before deciding on the pork chop, described as being “apricot-glazed with herbed ricotta-almond stuffing.”

It sounded luscious and might have been, if it hadn’t been brought to the table so undercooked that it practically squealed when I stuck my fork into it. I worried that the chop looked a little too pink, but I bravely took a few bites and it was delicious, a molten puddle of almond-flavored cheese oozing out from the center. But the meat’s rareness worried me.

“Is this pork chop supposed to be so pink?” I asked Joel.

“I wondered about that too,” he said, whisking away the plate, which I never saw again — nor did he offer me another dish. When he returned, he simply said, “The chef agreed and said the chop wasn’t normally that pink.”

When I told him I hoped I didn’t become ill (and mercifully, I didn’t), Joel smiled beatifically and said, “I’ll pray for you.”

I wound up nibbling on Wendy’s tortellini, which was swimming in a spicy tomato cream, Eddie’s tender, superbly grilled steak, delicately flavored with wild mushrooms and a splash of red wine, and Bob’s hearty bowl of linguini in a rich black-pepper cream sauce flecked with pieces of salty pancetta.

My mood had soured by the time Joel arrived with the tasteful little dessert menu, which listed six divine-sounding pastries (“But still no bread,” Wendy laughed). Since my companions were more jovial than I was, I simply skulked while Wendy ordered the crème brûlée, Bob the “chocolate torta luna with espresso sauce and crème anglaise,” and Eddie a white chocolate Godiva cheesecake.

“My dessert is so rich and thick, it’s like a chocolate paté,” gushed Bob.

At last the check arrived, and — considering we had compounded our time sitting in this former bank and had deposited quite a lot of food into our vaults — I was pleased to see that the bill wasn’t at all highway robbery — even though I had been charged for the pork chop. That pork chop might not have accrued much interest, and there wasn’t always enough bread in our account, but the rest of the dinner met the gold standard.