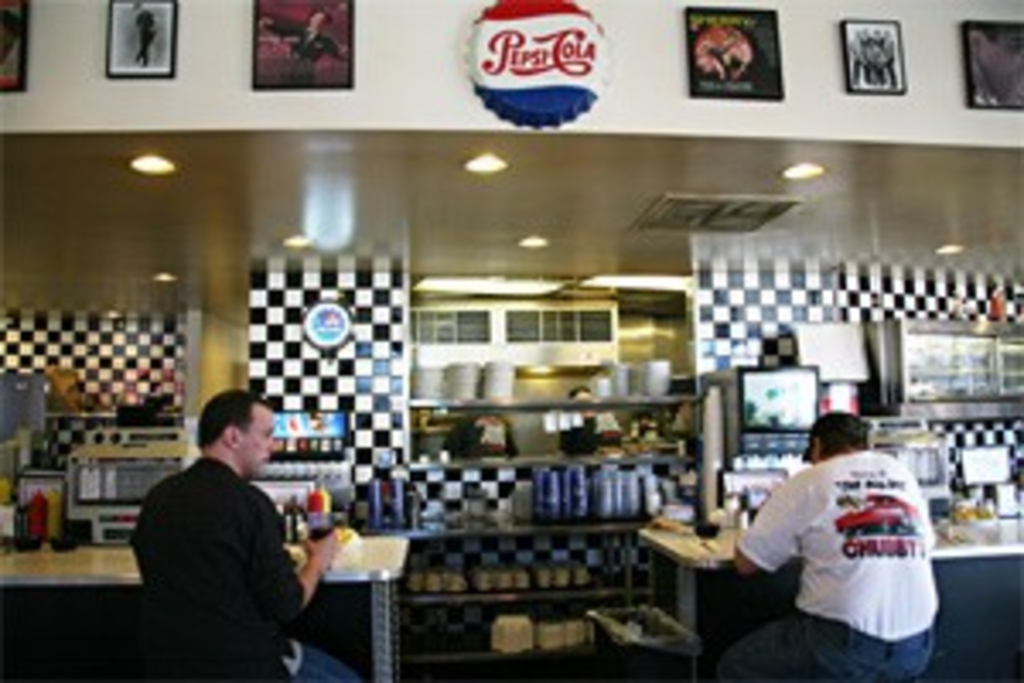 Many years ago, I was moved by reading actress Shirley MacLaine’s account of being a poor young dancer in New York during the 1950s. In order to survive, she was clever at making meals out of nothing — at visits to a low-cost cafeteria, she’d buy a single order of raisin toast and make lemonade out of a glass of water, lemon wedges and packets of sugar. It wasn’t much, but it was fortifying enough to be a sort of meal.

I remember wondering whether I’d ever have to be that creative to survive.

I did face some tough financial times, and though I never had to live on lemonade and toast, there’s a reason I can’t even look at frozen potpies or a peanut-butter sandwich today. Still, I was lucky to work in restaurants during those years because those jobs afforded me either a free meal before a shift or a discount on food.

And I learned to keep track of which bars offered a decent spread during happy hour. In the 1980s, competition for the bar crowd got so intense that ambitious clubs mounted elaborate buffets of cocktail fare — a lot of fried and salty stuff so that customers would get thirsty and order more booze — where I unashamedly stuffed myself for the cost of a single Bud Light. And there was always Putsch’s Cafeteria on the Plaza, where, if you ordered judiciously, you could get as many as five items, including dessert, for about seven bucks.

Now, as a professional restaurant reviewer, I get reimbursed for many of my meals. But I still look at the right-hand side of the menu — the prices — with more scrutiny that you might expect. (I do have a budget, after all.) And though I’ve eaten in plenty of good dives on my gastronomic journey, those aren’t the places that lure me when I’m spending my own dough.

In fact, when I’m taking myself out to eat, I should probably be more of a penny pincher than I am. My Aunt Josephine reminds me that I should be saving every possible cent, especially with recession looming. “You’ll be sorry you spent money on fancy dinners when you’re living in a homeless shelter!” she warned me. When I scoffed at her fears, she added, “You’ll eat those words someday.”

Someday? I was eating them last week! I decided to follow Aunt Jo’s advice and stretch my dining dollars as far as I could without compromising my health or my sanity. No convenience-store hot dogs or breakfast sandwiches, no fast-food burgers from the “budget menu” — in fact, no fast food at all. And no sneaking into certain hotel lobbies to snag food from the complimentary breakfast buffet, an idea suggested by a former co-worker.

I don’t mind actually paying for breakfast, but I do have certain inflexible standards, which is why I can’t succumb to the so-called bargain known as the McDonald’s Big Breakfast: a flat box made of some synthetic material containing a squiggle of rubbery scrambled eggs, a tasteless soggy biscuit, a floppy sausage patty and a compact disc of deep-fried hash browns. In midtown, this culinary delight costs $4.93 plus tax. I’d much rather sit down and order the good ol’ “Country Breakfast” at Chubby’s, which is a real deal at $5.09 (plus tax and gratuity). It’s served on a real plate and includes two eggs, two pieces of good bacon, a thick sausage patty and a better-than-average biscuit split and drenched in sausage gravy. Even better than the food are the people in the joint, who can sometimes seem like the cast of a John Waters film.

Chubby’s has its iconoclastic charms, but I’ll confess that I had to suck up my snobbery a couple of times on my Cheap Food Tour. Such was the case on the afternoon I had lunch with my friend Franklin at Ryan’s Grill, Buffet & Bakery in Independence.

“If you want to eat where the real cheapskates eat,” Franklin told me, “you’ll appreciate the $6.79 lunch at Ryan’s.”

The vast dining room evokes a depressing small-town bus terminal, but the place is tidy and the servers — nurturing older ladies who were eager to refill glasses or bring out more gummy, hot dinner rolls — were adorable.

Ryan’s isn’t bad. It boasts all the usual items — an appealing salad bar, heaps of fried chicken, several hot soups, a taco bar, macaroni and cheese — but I was particularly drawn to the vat of greasy cheeseburgers next to a stack of buns, each enclosed in a sanitary plastic sleeve. I was also thrilled that a smiling woman was passing around thick grilled cheese sandwiches as if they were caviar canapés. I ate one, and it was excellent. The desserts on the “bakery” counter looked ghastly to me, but Franklin liked his cherry cobbler. The coconut cake, on the other hand, tasted like a sawdust-and-sugar-paste stage prop left behind by the Sweeney Todd tour.

After that, I made a promise to myself: No matter how inexpensive, no more buffets. That was before my notorious friend Mr. Stingy gave me the scoop on his two favorite money-saving venues. He loves Sweet Tomatoes, which has the longest and most elaborate salad bar in town. “But you have to eat there before 4 p.m.,” Mr. Stingy said. “That’s when they start charging the dinner prices. Oh, and try to get a coupon, and it’s even cheaper.”

I decided to pass on the salad extrava­ganza, though Mr. Stingy is also a fan of the midtown location of the China Town Super Buffet. Four of these restaurants are scattered around the metro, all serving Chinese, American and Mexican dishes. I cringed at the idea, but he insisted I check it out. “The dinner buffet is $8.45,” he said, “and it includes a free beverage.”

With my Aunt Josephine’s stern voice echoing in my head, I walked into the surprisingly attractive restaurant and immediately saw a good friend happily sitting in front of a plate piled with food. She jumped out of her chair to kiss me and whispered in my ear, “I wear my fat-girl pants when I come to this place.”

Like most Chinese buffets, China Town lays out so many offerings that it’s easy to ignore the ones that aren’t so tasty. I liked quite a lot here: the chili Colorado, the fajitas, the black-pepper pork, the General Tso’s chicken and the teriyaki chicken. And I was so full when I left, I wished I had been wearing my fat-boy pants.

At some point during the week, my friend Bob made the horrifying suggestion that we start venturing out to restaurants offering “early bird” dinner specials — the culinary equivalent of an AARP card. I appreciate their value, but when I was a waiter, the geriatric crowd that showed up for these specials didn’t tip very well. The fixed-income thing, you know.

But because I was eating my words all over town, we headed to Figlio for its popular weeknight deal, which offers all the pasta dishes on the menu, a Caesar salad, breadsticks and a scoop of gelato for $11.95. I kind of like Figlio, although the dining room is looking so tired and dated that the place might as well start playing Lawrence Welk tunes over the sound system.

But 12 bucks (not including beverage, tax or gratuity) is a pretty terrific deal because the pasta dishes regularly range from $15.75 to $18.96, not including salad or dessert. The early-bird pastas are supposed to be half-orders, but our cheery server, Beth, told us that this depends on who’s in the kitchen that night. When she brought out Bob’s lasagna (which he enjoyed after sending it back to be heated up) and my tortellini, she announced, “I told you, it depends on who’s in the kitchen — these are more like full orders.” I was so overwhelmed by the bounty of good fortune that I nearly paid for the dinners with my AARP card.

The Avenues Bistro Brookside also offers an excellent early-bird menu every day from 3 to 7 p.m. with many of its most popular dishes, such as champagne chicken, at reduced prices. But the best time for a cheapskate to visit Avenues Bistro is for Sunday brunch — it’s actually the best such deal in town. For $12.95, the snazzy brunch menu lists eight versions of eggs Benedict (including Tuscan, Parisian and Southern variations) as well as pancakes, an Irish breakfast, a Bavarian number (with German sausage and a potato pancake) and nine omelets. The latter range from a traditional cheese version to a mind-numbingly rich dish filled with shaved Italian black truffles, Maine lobster and Port Salut cheese. That’s not all, though. There’s also a buffet table almost groaning with sweet pastries, chilled shrimp, fresh fruit, meats and cheeses, interesting chilled salads and savory puff pastries.

When something this fabulous turns up, the combination of fine food and low prices feels like winning the lottery. In fact, that’s what I discovered at one of the most expensive steakhouses in the city. As a happy-hour attraction from 5 to 7 p.m. Monday through Friday, the clubby little lounge at Morton’s the Steakhouse serves tiny filet mignon sandwiches for free.

The bar at Morton’s is all dark wood, fragrant with the aroma of expensive cigars and a mostly male clientele. The handsome bartenders make everyone feel like a high roller — my friend Jennifer and I actually forgot that we were on a cheapskate mission. We didn’t even feel guilty about eating four sandwiches each — a great little dinner for the cost of her domestic beer and my club soda.