Did Jackson County and the KCATA pay a fair price for the Rock Island Rail Corridor?

Jackson County political leaders and dignitaries gathered on the balmy afternoon of May 2, under a tent at a Union Pacific rail station near the place where Interstate 435 passes over Blue River. They’d come to finalize an agreement for the railroad company to sell the 18-mile Rock Island Rail Corridor to Jackson County and the Kansas City Area Transportation Authority. The rail line, disused for the past 35 years, runs from Kansas City to Lee’s Summit.

Acquiring rail lines was a big goal during Sanders’ years as Jackson County executive. He announced plans in 2010 to build a wide-ranging commuter-rail network that would span Jackson, Clay, Platte and Wyandotte counties. Those plans never came to pass, due to a combination of little political buy-in, the reality that they would come with new taxes attached, and the lack of cooperation from railroad companies.

So May 2 marked a grand idea’s official reduction to one acquisition, of a lone rail line that Union Pacific had effectively abandoned in 1981. Trees grow between rail ties on some parts of the 18-mile stretch. In other places, rail lines no longer exist. 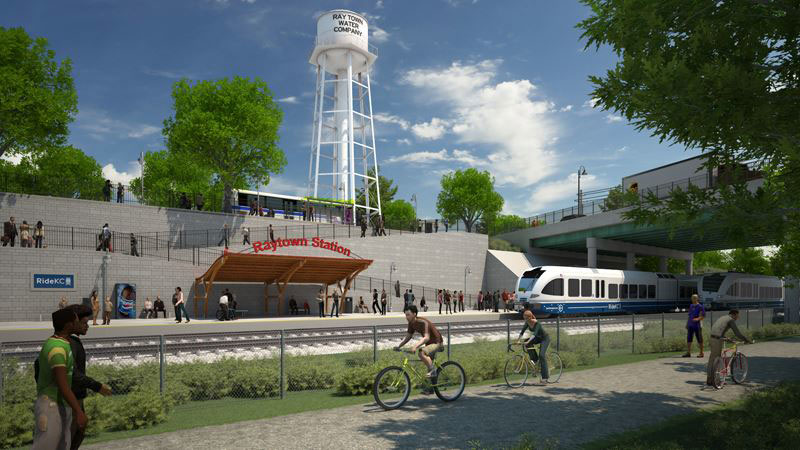 Despite this, Jackson County officials continue to promote the acquisition of the Rock Island Rail Corridor as a necessary step toward someday establishing commuter rail between the Truman Sports Complex and Lee’s Summit. Fresh renderings give the idea of rowdy Chiefs fans hopping on the train after a victory over the Raiders and heading home without idling in a postgame traffic jam. In the meantime, Jackson County touts the deal as a recreational improvement, one that would connect KC to the Katy Trail via a bicycling and jogging track.

Jackson County and the KCATA agreed to pay Union Pacific $52 million for the Rock Island Rail Corridor, a price tag that grows to $84 million because the county is issuing 30-year debt to finance the transaction. (The county spends $13 million a year for its entire parks and recreation department.)

Is 18 miles of railway worth $84 million? The Pitch obtained an appraisal in 2010 that was funded by Lee’s Summit, Raytown, Jackson County and the Mid-America Regional Council. It estimates the value of the corridor at $12 million. Assuming 4 percent annual growth in property values in Jackson County year over year, the county still paid far above what Shaner Appraisals thought the land was worth.

Dallas consultant Lonnie Blaydes, whom Jackson County hired to negotiate the deal with Union Pacific, says the cost is about more than the land. “Jackson County wanted to acquire not only the real estate, but also Union Pacific’s right to run freight trains,” he tells The Pitch.

How did Jackson County value those rights?

“It really is a negotiated price,” Blaydes says.

Railroads are powerful companies that enjoy vast federal protections. One of those protections is an immunity against condemnation by local governments. That means that governments such as Jackson County don’t get to leverage eminent domain, no matter how many errant trees grow through old railroad ties. And railroad companies are sometimes reluctant to sell even long-disused property because it would be difficult to regain access to the land should the building of some future railway ever beckon. So Union Pacific, ultimately, is far from an eager seller and can command a premium price.

Other cities have bought rail lines for amounts that exceeded their appraisals. In 2009, Virginia Beach wanted to acquire about 10 miles of unused rail corridor from Norfolk Southern Railway. The city’s appraisal said the land was worth $6 million. Virginia Beach initially offered $10 million. What both sides eventually worked out was a $40 million purchase agreement.

“The opportunities and windows [to buy rail corridors] come and close,” says Johnny Sweeney, director of economic development for Jackson County. “What we found here was a willing partner not only in the Union Pacific but also the KCATA. If you freeze in that moment, we were afraid that you just never know if you’re going to get that chance.”

County officials defend the purchase price, saying they could not have negotiated a lower one. They also say the cost, $2.8 million per mile, is in line with what other cities have paid.

Other costs associated with maintaining the corridor now fall on Jackson County, the property’s new owner. The 2010 Shaner Appraisals document says many of the bridges over which the railroad runs are in average condition. If they worsen, or the county needs to upgrade them in order to run commuter rail over them, that responsibility is now the county’s.

Some areas of the rail line are in a 100-year floodplain, according to the Shaner appraisal. In most real estate transactions, that’s one of the first questions that’s asked, but county officials I’ve spoken with seemed not to have been aware of this detail.

The Pitch asked Sanders for his take on the purchase. Sanders, who, after being elected to a third term as county executive, resigned in December so he could spend more time with his family, now works for a plaintiff’s law firm in Independence. Through a spokesman with that firm, he declined to comment, saying he’s ethically bound not to discuss the Rock Island Corridor purchase because of attorney-client privilege.

That privilege applies to the legal contract Sanders got from the county as he was resigning his office, so that he could oversee the acquisition of the Rock Island Corridor. His contract is indicative of the interconnectedness of the corridor purchase: Robbie Makinen, who worked on Sanders’ county executive staff, is now the CEO of the KCATA, which is splitting the cost of the corridor purchase. Makinen hired current county Executive Frank White’s son at the KCATA. Calvin Williford, who was Sanders’ chief of staff, got a full-time job running the newly formed Rock Island Rail Corridor Authority. Jackson County used Ameritas Investment Corp. to underwrite the 30-year bonds used to pay for the acquisition; KCATA board member Michael Short works for Ameritas.