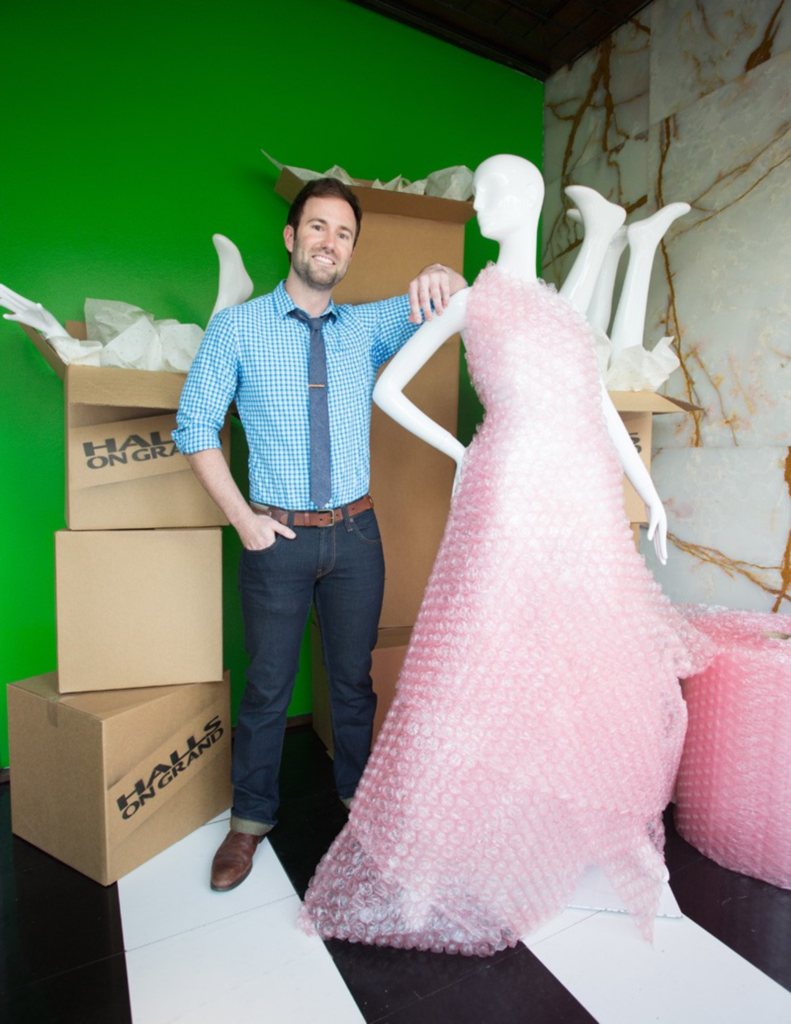 I arrive at Halls on Grand a couple of weeks ahead of its public debut, and I wonder whether I’m at the right address. Everything I see — exposed brick, concrete, LED lighting, glossy red mannequins, Dalmatian statues with spike collars, retro televisions — appears more in line with some far more sophisticated version of Urban Outfitters. The place doesn’t look like a classic department store.

Taylor Gozia, the 29-year-old visual merchandise manager for Halls, smiles at my reaction.

“Reimagine,” he says, echoing the theme for this new Halls store. “We want people to think of this as a place unlike anywhere they’ve been before.” (A clever website domain, overhalled.com, highlights the brand’s new direction.)

The area where I arrive, called the Bridge, is a fashion-forward department targeting young adults and highlighting national designer brands, including Rag & Bone and Theory. Works by local artists will rotate through the department, with pieces by Nelson-Atkins Museum of Art painting conservator Scott Heffley (the Dalmatians, the old TVs and other striking ephemera) part of the grand opening.

“We’re on the cusp of the Crossroads,” Gozia says, pointing out a 60-foot-wide window over Grand Boulevard with a view of the downtown skyline, the Western Auto sign prominent. “With the new store, we’re bringing the art of retail and clothing into the arts district while also supporting the local artist community.”

The rest of the store has a contemporary look: sleek white-tile floors and white ceilings and walls, and bright modern lighting. There’s a café and bar. The dressing rooms are oversized. Even the parking spots are more comfortable than the usual cramped Crown Center slots (though, of course, valet parking is also available). The beauty department is expansive, and throughout the store is a large selection of luxury brands and exclusive merchandise, complemented by what people here call “lifestyle elements.” Which means, for example, that you try on shoes in a space that resembles a living room.

Gozia shows me around the new space with a contagious excitement. It has been about a year since Halls CEO and President Kelly Cole called Gozia — who had previously worked for Banana Republic and was with Hallmark Cards at the time — to his office. There, Cole rattled off his vision for the new Halls, a list in sync with Gozia’s aspirations for the brand: fresh, modern, comfortable, diverse in target age.

Gozia and his creative team then went to work on shaping the look and feel of the new Halls, creating innovative window displays, such as the mannequins in Bubble Wrap clothing that spent the summer in the windows at the former Plaza store, advertising the move to Crown Center.

The new store moves away from window displays and toward interactive, in-store focal points, which the staff calls “nodes.” One of them is a stately brass chandelier. Amid the hum of store construction, Gozia stands where the home department is being set up and points to the fixture.

“That’s from the old Swanson’s, and we’re updating it with LED lights,” he says of the nostalgic piece, which once hung inside that Plaza department store. Here, it’s likely to illuminate a table displaying a china setting.

The chandelier represents one of many carefully planned visual details, big and small, in the new Halls.

“There was a day when I got a call from the JFK airport because this shiny, chrome hand mirror that we loved and ordered was going through customs,” Gozia says. The mirror’s journey ended in the new store’s beauty department, where it waits to be admired by sharp-eyed shoppers.

Gozia and his team are already looking past the opening to the holiday season. In typical Halls on Grand style, holiday design plans will come with an element of surprise.

“We’re not going to go the traditional route of hanging things from the ceiling,” Gozia says, stopping himself before he gives away too much. “It will be very different, that’s for sure.”

The opening of Halls on Grand opening takes place from noon to 6 p.m. Sunday, September 14, on the third floor of Crown Center.