Democrats are afraid of their own shadows 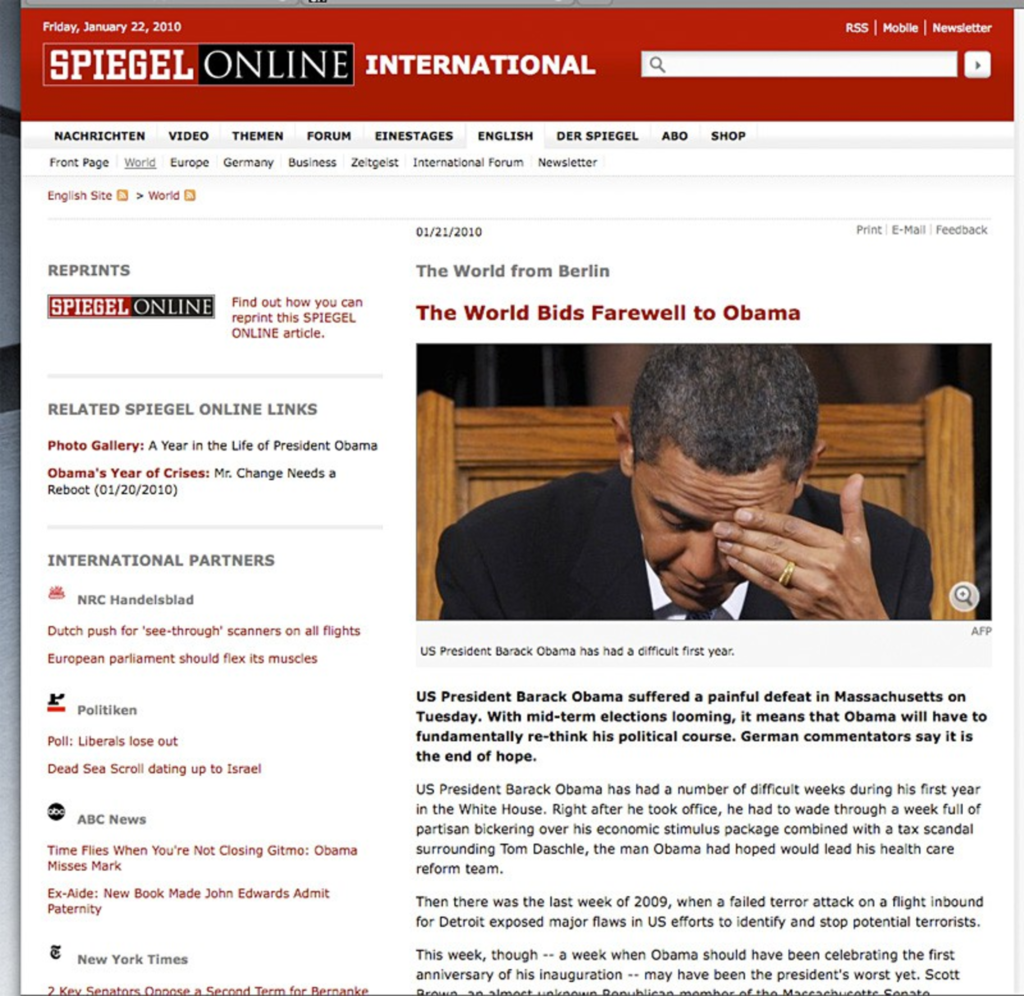 Sometime a little after noon on Thursday, January 21 — two days after a previously unknown pinup boy and Republican state senator in Massachusetts single-handedly destroyed the Democratic Party by winning a special election to replace Sen. Edward M. Kennedy — KMBZ 980’s conservative talk-show host Darla Jaye signed on to her Twitter account, where she is known to post astute political commentary.

“Even the Germans see that Hope and Change is Hopeless!” she wrote, including a link to a media outlet. “Obama=FAIL!”

Darla’s tweet sent her followers to
Spiegel Online International, where the headline reported: “The World Bids Farewell to Obama.” A photo depicted the president with his head hung and his hand across his eyes as if he were about to start crying. (It’s a tight shot, so he could have been looking down to read the Lilly Ledbetter Fair Pay Act or some other piece of socialist legislation.) Anyway, he did not look happy. The caption? “U.S. President Barack Obama suffered a painful defeat in Massachusetts on Tuesday. With mid-term elections looming, it means that Obama will have to fundamentally re-think his political course. German commentators say it is the end of hope.”

The end of hope!

In fairness to Jaye, we know that she wouldn’t really revel in the death of “hope” and “change” — at least as concepts that denote healthy impulses in human nature and history. We know this because of “The Big Tease,” Alan Scherstuhl’s excellent profile of Jaye in the December 10, 2009, edition of The Pitch. Discussing racism, Jaye told Scherstuhl that wasn’t the reason her listeners didn’t like the president. “The vast majority of people who listen to my show don’t like him because of his policies or his associations, or because they feel he wasn’t qualified for the job. They don’t like him because he won by just saying hope and change, change and hope for a year.”

But wait — scrap that “in fairness to Jaye,” because “just saying hope and change, change and hope” was not the only reason Obama won. There were, after all, those two wars that the previous president had started (where was Rep. Joe Wilson to yell “You lie!” when George W. Bush claimed that Saddam Hussein had weapons of mass destruction?) and an economy gurgling down the crapper. Just to name a couple.

A majority of Americans voted rationally. And then a rabble of sign-carrying loudmouths started getting hysterical, and the flaccid, worn-out, gutted (and gutless) national media started taking the hysteria way more seriously than it deserved. And the big-money interests that bankroll Congress dug in against change.

And the Democratic establishment blinked.

In that sense, the death of hope came long before Scott Somebody’s election to the U.S. Senate last week.

Apologies for bursting the right wing’s gleeful bubble of delusion, then, but the country’s politics aren’t swinging their way because Obama “over-reached,” to use one of Republican strategists’ most effective buzzwords. Democrats are in trouble because they’ve been pussies.

And they know it.

“Our base of people who put Obama in office don’t feel like the national Democratic Party is following through, so they have no reason to come out and support our candidates,” admits Stephen Bough, chairman of the Jackson County Democratic Committee.

“We’re supposed to dance with the one that brung us,” Bough says. “The people who wanted universal health care — we’ve sold them down the river. The folks who want to see us out of war — we could be doing something besides escalating wars. Union folks want an equal chance to have their votes heard on unionization. Schoolteachers want reforms to education. The gays and lesbians who stood up and fought for the Democrats have every reason to feel abandoned — the administration, by executive order, could get rid of ‘don’t ask, don’t tell.’ Politicians need to give a damn about their supporters and the issues that are important to those people.”

Instead, by pandering to the supposedly moderate “independent” voter — a Rovian creation now burned into the hysterical-media-fueled national imagination — frightened Democrats simply chase their tails in ever-smaller circles.

“In the days of the 24-hour news cycle, we have a lot of mis — this is going to be a George Bush word — misanalyzation of events,” says U.S. Rep. Emanuel Cleaver.

Though the Massachusetts vote “was certainly not helpful to the president,” Cleaver says, the people who voted against Democrat Martha Coakley “were angry about a potpourri of issues.” He cites financial-industry bailouts, executive bonuses on Wall Street, cap-and-trade environmental legislation that people don’t understand, and the way watered-down health-care legislation was approved in the Senate with what looked like bribes to win votes from conservative Democrats such as Ben Nelson of Nebraska and Mary Landrieu of Louisiana. “Frustrated progressives were angry at what they believed to have been a betrayal by the president and the Senate,” Cleaver says. “We not only empowered the teabaggers but we depressed the base.”

A year ago, Cleaver notes, Obama had an approval rating of nearly 70 percent. “He had the goodwill of the American public. I think his advisers said, probably, ‘You should move toward the middle and let’s kind of quietly move away from some of the commitments we made during the campaign.’ And unfortunately, he did. I think the people want the Obama they voted for and the Congress they voted for. My wife has beaten up on Democrats more than anybody I know. She says, ‘You guys asked for a majority in the House; you got it. You wanted a supermajority in the Senate; you have it. The White House — you have it. And you still can’t get anything approved.’ She’s right. We need to do what we said we were going to do.”

Cleaver can say these things because he represents a mostly urban, reliably Democratic district. But the news from earlier this week was that Republicans were already tasting the blood of Rep. Ike Skelton, a Democrat from mid-Missouri.

And on the day after Brown’s win in Massachusetts, Missouri Republicans were celebrating a new Rasmussen poll that had their boy, Rep. Roy Blunt, suddenly running six points ahead of Secretary of State Robin Carnahan in the race for Kit Bond’s Senate seat.

On his blog, Blunt shared his thoughts about “the miraculous victory in Massachusetts.”

“The American people still run this country,” Blunt wrote. “When Washington liberals tried to stage a coronation for another Obama-Pelosi-Reid rubberstamp in Massachusetts, the people rejected the machine liberal and chose Scott Brown to represent them in the United States Senate. The result may shock the pundits, but it should not surprise anybody who has been talking with the American people. All across America, people are rejecting the job-killing policies of Nancy Pelosi, Harry Reid and Barack Obama.”

Never mind that Blunt was majority whip during the George W. Bush era, when most of the jobs were lost, and that it will take decades to reverse the damage of that administration’s policies.

Blunt — who has been in the House since 1997 — might ride into the Senate on what cable-TV analysts are characterizing as “anti-incumbent” anger.