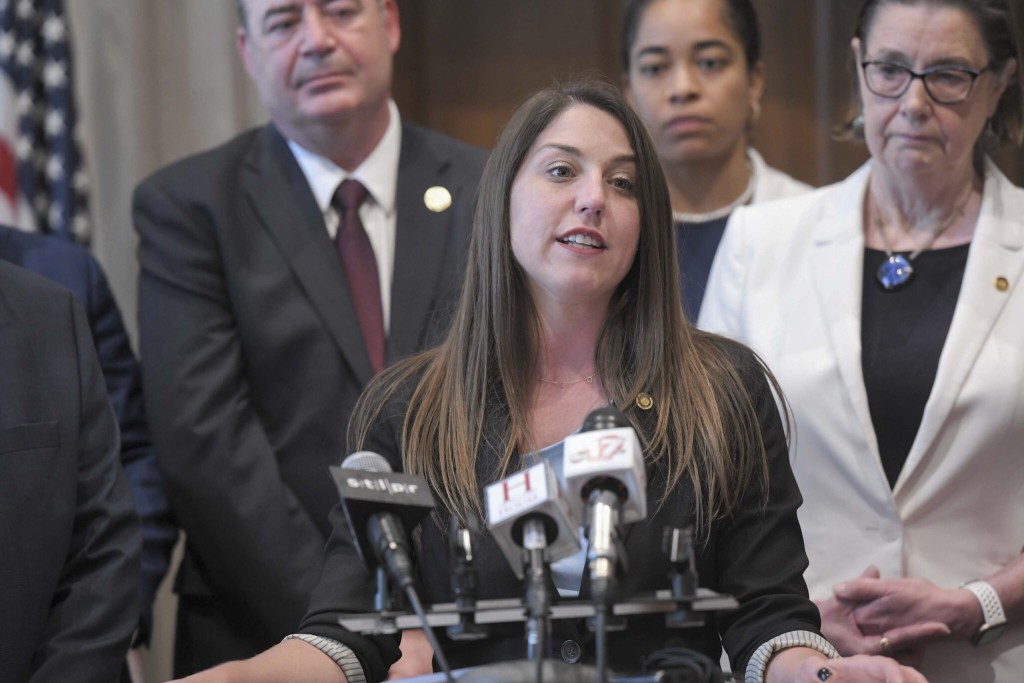 Investigators from the Department of Health and Senior Services visited Freeman Health System in Joplin this week, Quade wrote in letters to Schmitt, Gov. Mike Parson and the department. She wrote that she has been told the inquiry focused on the treatment of Mylissa Farmer, admitted Aug. 2 when her water broke about 18 weeks into her pregnancy.

In a television ad from Democratic U.S. Senate candidate Trudy Busch Valentine targetting Schmitt, the Republican nominee, Farmer speaks directly to the camera explaining how she could not obtain needed care at Freeman by a doctor who cited the state’s strict abortion ban.

“My Missouri doctors weren’t allowed to give me the care I needed, all because of the mandate Eric Schmitt put into place,” Farmer says in the ad. “Eric Schmitt doesn’t care about women like me.”

The reaction of Schmitt’s campaign – it had its lawyers send letters to television stations demanding the ad be taken off the air – makes the investigation disturbing, Quade wrote. She demanded, under the Sunshine Law, that she be given records of communications involving Parson’s office, Schmit’s office and the department about the investigation.

“The timing of this investigation is suspicious and concerning to say the least, and suggests that the substantial taxpayer-funded investigative power of state government is being weaponized against citizens for political retaliation,” Quade wrote.

Parson’s office and the department did not respond Friday to requests for comment on the investigation and Quade’s letter. Chris Nuelle, spokesman for the attorney general’s office, wrote in an email that “our office is not involved.”

Reached by telephone Friday afternoon, Quade said she has not received any response to her letters. The visit by investigators was reported to her by a whistleblower, she said,

She hasn’t seen any polling, but the ad featuring Farmer speaking directly to the camera about her experience clearly must have Schmitt worried, Quade said.

“I don’t have any data or anything to prove that,” she said. “I do believe that when individuals are telling their stories about what is happening in our state, it will be effective.”

Valentine has been outspending Schmitt this month on television and has far more money to call on in the final days before the Nov. 8 vote.

Valentine, one of the heirs to the Anheuser-Busch beer fortune, has spent $10.3 million of her own money, including $4 million contributed since Oct. 1, on her Senate campaign, according to Federal Election Committee reports filed this week

Since Oct. 1, she has outspent Schmitt on television ads by more than $1 million, $2.6 million to $1.4 million for Schmitt’s campaign committee.

Broadcaster reports filed with the Federal Communications Commission show Schmitt is getting help from a familiar source. Save Missouri Values, a political action committee that spent $5.3 million to help Schmitt win the GOP primary, spent $67,000 on television ads in Columbia and Springfield.

The PAC has been dormant since the primary, but received donations this month of $100,000 from Centene and $25,000 from Drury Development.

In letters to television stations, Schmitt’s attorney, Ed Greim of Graves Garrett in Kansas City, warned that the broadcasters faced liability if they continued to run the ads and Schmitt were to prove it is defamatory.

“You should immediately cease and desist from airing the ad unless and until it is changed to correct these false and misleading statements,” Greim wrote in a letter filed with the FCC by KOLR television in Springfield. “Ms. Busch Valentine’s campaign likely did not and could not provide substantiation for its false statements.”

Farmer’s experience was featured in an Oct. 19 article in the Springfield News-Leader. Farmer’s water broke on Aug. 2 but her doctor at Freeman Health System in Joplin told her nothing could be done under Missouri’s strict abortion law because a heartbeat was detectable in the fetus.

She reached out for help through state Sen. Bill White’s office, the article stated. She was referred to a Christian anti-abortion pregnancy center and the office said it would contact Schmitt’s office to clarify the legal issues.

She never heard from Schmitt’s office, Farmer told the newspaper.

After two days of calling for assistance from other states, Farmer obtained an abortion on Aug. 6 in Granite City, Illinois, the article states.

Everything the ad states is factual, said Jacob Long, spokesman for Valentine’s campaign. No station has taken it off the air, he said.

“We have not altered the ad in any way because there is nothing to alter,” Long said.

Schmitt’s campaign did not respond to a request for comment on the investigation or whether the cease-and-desist letters had any effect.

The Valentine campaign cites a St. Louis Post-Dispatch article quoting a former counsel to Gov. Mel Carnahan that a woman who obtained her medications to induce an abortion on her own could be prosecuted.

He also said the law protects a woman’s health because an abortion is allowed when “a delay will create a series risk of substantial and irreversible physical impairment of a major bodily function.”

“There is only the truth,” Long said, “and that is exactly what the ad presents.”

Jacob LaGesse of the University of Missouri School of Journalism worked with The Independent to access data on media ad buys for this year’s election.