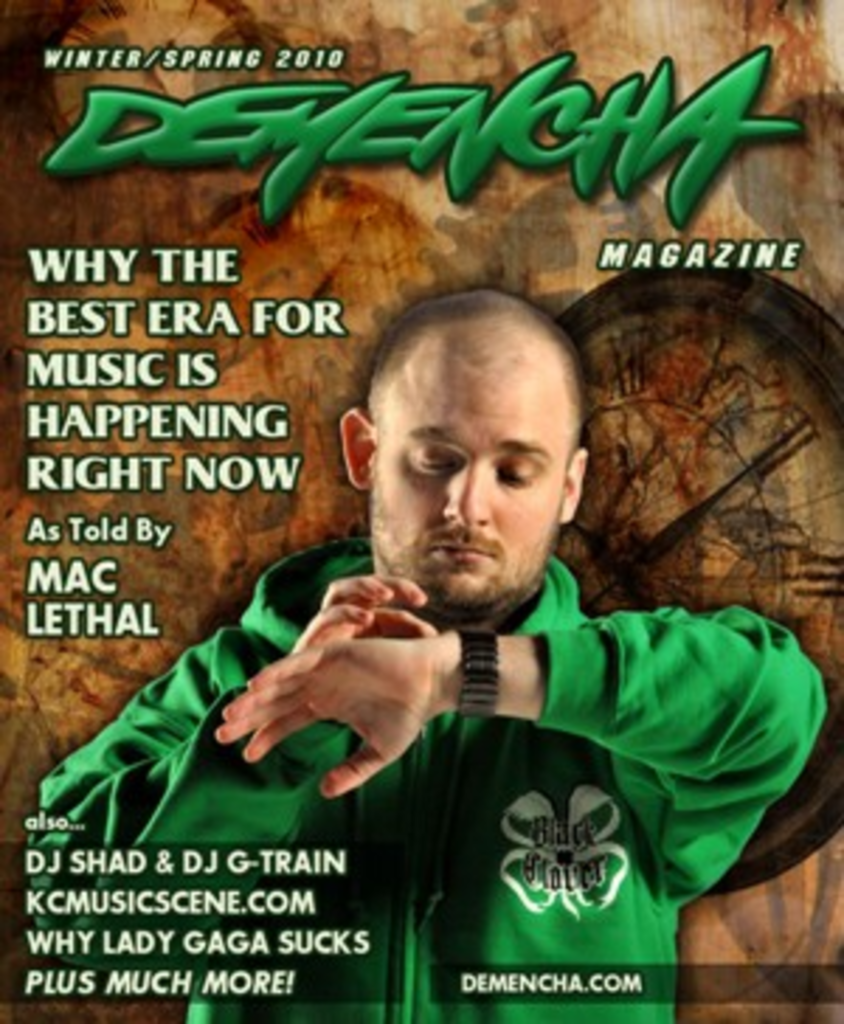 Demencha Mag has a new winter/spring issue that recently went to print. The cover with Mac Lethal, which you can see below, is one of two. The other features DJ G-Train and DJ Shad.

Now, the issue went to print two weeks before the untimely death of Sliccs Gotcha, so coverage of the rapper’s demise are not included. In a recent missive, the magazine’s editor, Chris Milbourn addressed Sliccs’ shooting:

First and foremost, I would be remiss to write this editor’s note without mentioning the late local rap artist, Sliccs Gotcha, who lost his life just about two weeks before we went to print with this issue. One of our writers actually completed an interview with Sliccs which appeared in the winter/spring 2009 issue of Demencha, after suggesting to me that Sliccs was very well known on the street rap side of Kansas City’s music scene. I had the pleasure of meeting Sliccs a few times, and most recently saw him at the Taste of Troost festival last summer.

Not to go into too much biographical talk, but Sliccs was a part of a very close-knit family/collective of rap artists from Kansas City’s North Side, Major Factor Records. When I first heard about Sliccs’ death, my first reaction was shock. I can only imagine how somebody, like his co-workers who I occasionally visit, would handle this.

Soon after hearing about his death, I found myself listening to a copy of his album, Prince of Whales, in the car one night. I suppose it’s common for people to celebrate an artist’s work when they pass. I also suppose that it’s natural to hear that music like you never have before in that moment. When I took the disc out of my CD booklet in the car that night, I looked at the album art behind it and remembered that Sliccs had actually signed it for me. My heart goes out to everyone who knew him better than I did.

The new issue of Demench Mag should be available soon. Keep an eye out at the usual clubs and record stores.