Delta variant surge appears to be peaking in Missouri 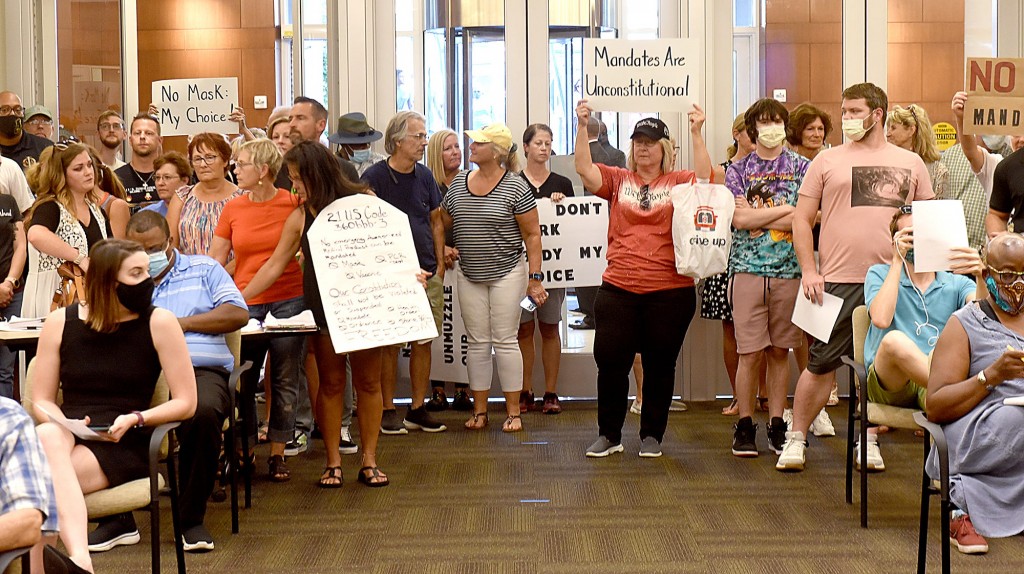 Missouri is seeing the first signs that the Delta variant surge may have crested, though many areas still suffer from rising COVID-19 case numbers while hospitalizations hit new highs for the summer.

On Wednesday, the seven-day average of COVID-19 cases reported by the Department of Health and Senior Services declined week-over-week for the first time since early June. The state’s dashboard average, of cases through Sunday, also declined, by 1.4 percent.

Both rates are about double the rate for the same point in July. As of Wednesday, the state reported 4,213 additional COVID-19 cases, with an average of 2,810 cases per day over the past seven days.

That average is more than seven times the low for the year of 396 per day on June 3. For August so far, cases are averaging 2,722 per day, an increase of 39 percent from the July rate.

Hospitalizations are continuing to increase. As of Sunday, there were 2,200 people being treated as inpatients, a number that is increasing by an average of 16 per day. COVID-19 hospitalizations hit their lowest point for the year on May 23, with 628 inpatients.

On Wednesday afternoon, Gov. Mike Parson announced the state would spend $30 million of federal coronavirus relief funds to bulk up hospital staffing and set up temporary antibody infusion centers to treat COVID-19. There will be five to eight centers, Parson said, capable of treating up to 2,000 people per day.

The centers will cost approximately $15 million, Parson said. A news release said they would operate for up to 30 days.

The daily case reports mirror the results from wastewater testing, said Marc Johnson, the University of Missouri professor of molecular microbiology and immunology who analyzes sewage samples for the state.

“Overall, it is declining a little bit,” Johnson said.

In late June, using data from wastewater, Johnson accurately predicted COVID-19 cases would double or triple in July. And at the end of July, he predicted the peak would come in the middle of August.

“We would be the first state to crest,” Johnson wrote. “If this is the peak, and the distribution is uniform, then about 3.5% of Missourians will have been diagnosed with COVID during this wave.”

If Missouri is at the peak, he said Wednesday, the decline will not be as rapid as the increase.

Over the past seven days, new case tallies increased in 51 of the state’s 117 local health jurisdictions and declined in 62. The fastest increase is in rural counties in eastern Missouri and the Kansas City region. The biggest declines are in southwest Missouri, where the Delta variant surge started in June.

The apparent crest has arrived as proposals for mask mandates in the state’s largest communities continue to generate controversy. The St. Louis County Council voted Tuesday night against an order, as did the Columbia City Council on Monday night.

At the St. Louis County Council meeting, opposition to the mask ordinance included people who don’t even believe that COVID-19 is real, the St. Louis Post-Dispatch reported.

“This council has a moral responsibility to first provide proof that COVID-19 and its supposed variant actually exists,” said Louise Kingsbury.

On the west side of the state, Jackson County Executive Frank White’s mask order, which took effect Monday, is expected to get a challenge from the County Legislature. The Kansas City Star reported that Chairman Dan Tarwater is trying to round up votes to rescind the order.

“I am hoping that in a week or so we can vote on it and get rid of the mandate,” Tarwater said in a message posted by a constituent to Facebook, the Star reported.

At the Columbia City Council meeting Monday night, Health Director Stephanie Browning said she opposed a new mask mandate for the city because it would be largely ignored and time-consuming to enforce.

“I don’t think a mask mandate will significantly increase mask wearing,” Browning said. “I just think our time is better spent on outreach, education, and vaccinations.”

The citywide ordinance was defeated on a 3-3 vote but the city is requiring masks at all indoor city government facilities. The University of Missouri is requiring masks in classrooms and meeting spaces regardless of vaccination status.

Boone County is reporting about 81 COVID-19 cases per day over the past week, a figure that has been exceeded on only four days since Delta variant cases started appearing in June. Boone County has 47.8 percent of its population fully vaccinated, the highest rate in the state.

“I fear that a new mandate will harm the progress we are making,” Browning said.

The first drawing in Missouri’s vaccine incentive lottery program, which includes $10,000 prizes for the winners, will take place Friday. Since Gov. Mike Parson announced the incentives on July 21, average daily shots have increased by 11.8 percent.

The deadline for entering Friday’s drawing is 11:59 p.m. Wednesday.