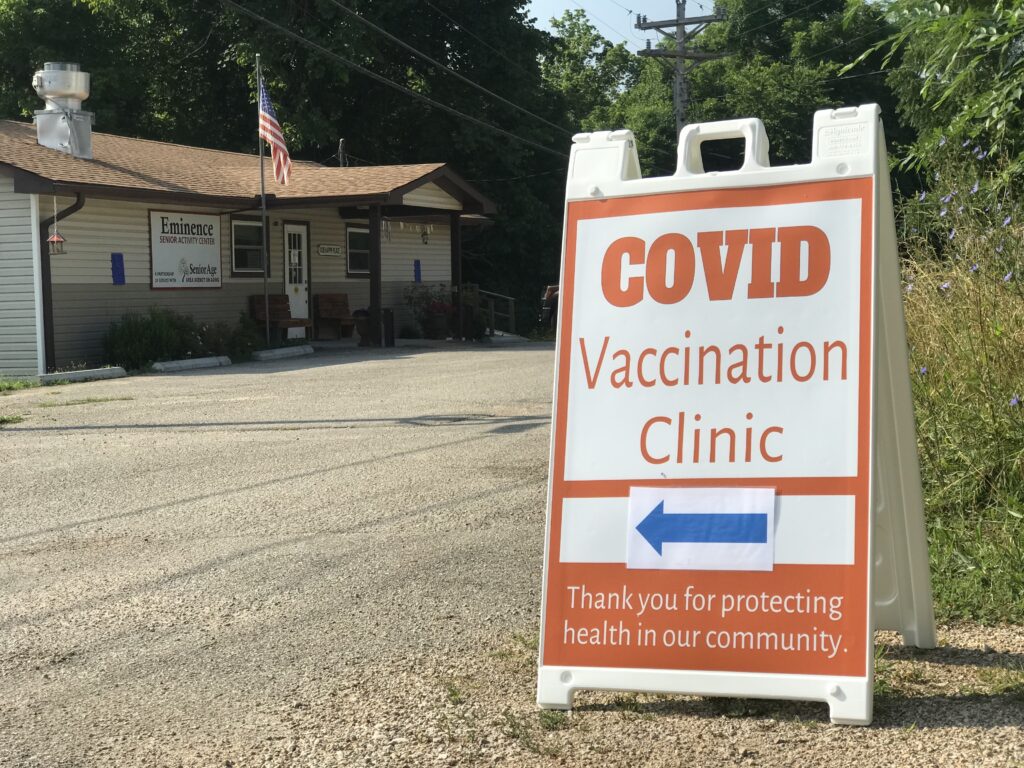 A sign marks the entrance to a drive-through COVID-19 vaccine clinic at the Shannon County Health Center on July 8, 2021. // Photo by Tessa Weinberg/Missouri Independent

July was the deadliest month for COVID-19 in Missouri since January, data released Tuesday by the Department of Health and Senior Services shows.

The weekly review of death certificates, where 75 percent of deaths in the state are identified, found that 52 of 86 newly confirmed deaths occurred last month as the Delta variant surge sent infection rates soaring. That pushed the total for the month to 499 — 20 more than February, which had been the second deadliest month of the year.

There have been 179 deaths confirmed so far for August, including 30 in the past week. The deadliest month of the year was January, with 1,276 deaths. The highest number of fatalities was 1,771 in December.

The new report came as hospitalizations continue to rise, the state announced that people with weakened immune systems are eligible for a booster vaccination shot and vaccine delivery rates remain below levels seen in early June.

In the St. Louis region, hospitals are limiting services to non-COVID-19 patients to conserve space.

“We simply don’t have enough people and staff to take care of all the COVID cases we are seeing, all the emergent care we have to render and the elective procedures, which although they can be postponed, are important for many individuals,” Clay Dunagan, BJC HealthCare’s chief clinical officer, in a briefing for the St. Louis Metropolitan Pandemic Task Force.

Hospitalizations statewide topped 2,400 COVID-19 inpatients late last week and while state data shows a slight decline in recent days, the seven-day average is the highest since the third week of January.

Statewide, 28 percent of hospitalized patients are in intensive care beds. That number is about 20 percent in the St. Louis region, Dunagan said.

“We don’t usually have 20 percent vacancy in our ICUs, so this means by default that some patients we would like to put in intensive care are in other beds,” he said.

The state as a whole continues to show a slow decline in new infections from the peak of the Delta variant surge in the first week of the month. Over the past seven days, the rate of new infections statewide has fallen about 8 percent, but it is not spread evenly.

The state health department reported 3,068 new infections Wednesday and the seven-day average of reported cases stood at 2,576 per day. That is down 8.3 percent from the previous seven-day period but 32 percent above the average a month ago.

In southwest Missouri, which was hit hard by the Delta variant surge starting in early June, infection rates are down about 20 percent in the past week while in the Missouri counties of the Kansas City metropolitan area, infections are down about 4.4 percent.

Livingston County was hit first, along with Linn County, when the Delta variant arrived in the state in May.

There has been a slight increase in community cases in the past two weeks, Weldon said, but rates are far below late May.

Some counties, however, are seeing their highest infection rates of the summer surge. St. Clair County, about 100 miles southeast of Kansas City, where infections increased 600 percent in July, has already recorded 81 percent of the cases reported last month.

“It is just hard to keep everybody safe,” said Nancy Stephan, administrator of the St. Clair County Health Center.

Only 25.9 percent of St. Clair County’s 9,300 people are fully vaccinated, 81st among the 117 local health jurisdictions and well below the statewide rate of 43.4 percent. Only four large-population locations are above the state average.

Nationally, 50.9 percent of the population is fully vaccinated.

The Appleton City Fair was held last weekend and an annual rodeo is set for Sept. 4, Stephan noted.

“You are coming off 4th of July weekend parties and that all hit in July,” she said. “In August, we’ve got block parties and fairs going. It is just a nightmare.”

Among those hospitalized currently in St. Louis, 15 to 20 percent have been vaccinated, Dunagan said. They are almost all elderly or people who have compromised immune systems.

The seven-day average of vaccination has been climbing and reached 13,739 shots per day on Sunday, about 2.5 percent higher than the rate on Aug. 1 but below the highest level seen in June.

Vaccine opposition remains a major problem for health officials. Steve Edwards, CEO of CoxHealth in Springfield, was accosted in a hospital parking lot by an Alabama resident, Christoper Key, who calls himself the vaccine police.

“If you continue to tell people at the hospital they have to be vaccinated, you are committing fraud,” Key told Edwards.

On Saturday, Key led a protest outside Mercy Hospital in Springfield, the Springfield News-Leader reported. The protest against the hospital’s directive to employees to get vaccinated was attended by Sen. Mike Moon, R-Ash Grove, and Springfield city Councilwoman Angela Romine, the newspaper reported.

“Government should stay out of the jab business.” – State Rep. Brian Seitz, R-Branson

State Rep. Brian Seitz, R-Branson, wrote on Facebook that he attended to “take a stand against mask and vaccine mandates. Our healthcare workers, and employees in all other industries, should not be forced to choose between their job and a jab.”

Seitz, who has claimed the virus was engineered by Dr. Anthony Fauci, last week raised objections when a grocery store pharmacy set up a mobile vaccine site outside the Missouri Capitol and House members and staff were invited to get a shot.

“Government should stay out of the jab business,” Seitz wrote in reply.

With school starting next week in many Missouri districts, health officials worry that the Delta variant surge will find new young victims. The only age group where infection rates this summer have exceeded winter peaks was for children 4 years old and younger.

Many larger school districts are requiring masks, including most in the Kansas City region, in the St, Louis area, and in Columbia Public Schools in central Missouri.

“We are continuing to see outbreaks among children and these are really coming at the wrong time with school about to start up,” Dunagan said. “We can prevent that. Vaccination and masks will have the ability to keep kids in school.”

At the University of Missouri-Columbia, where classes start Monday, there were 18 students and 24 faculty and staff with active infections as of Tuesday. MU is requiring masks in classrooms but not mandating that students be vaccinated.

A mask is better than the alternative, which is getting sick or being hospitalized, he said. St. Louis area pediatric hospitals are treating 20 children, including six in ICU beds, Dunagan said.