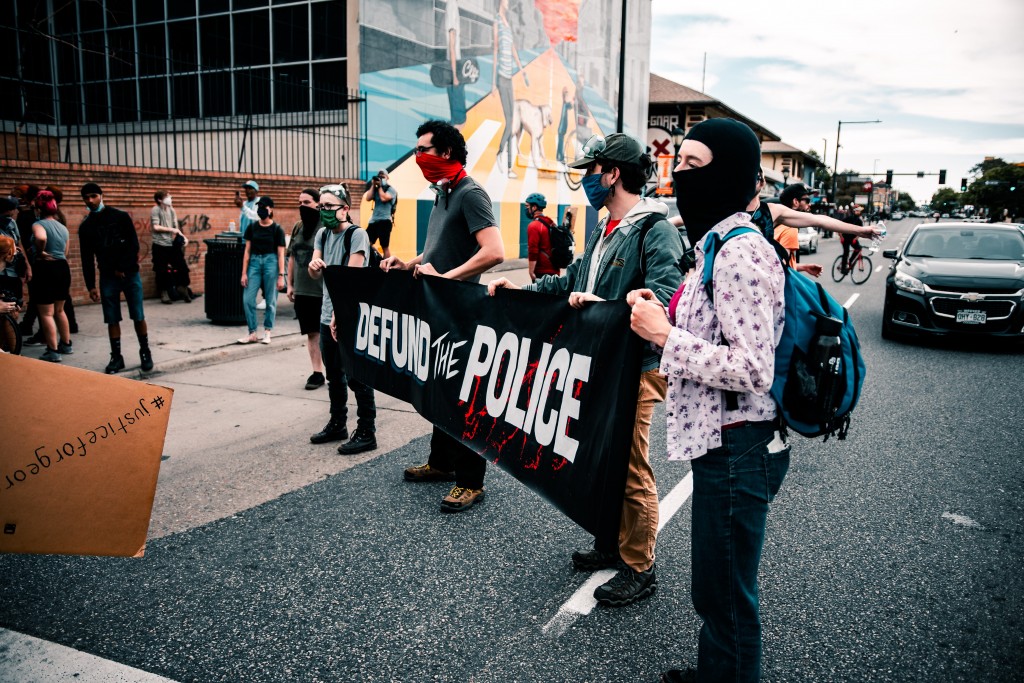 For years after the death of Michael Brown in Ferguson, activists and community leaders have pushed to “re-envision public safety.”

Inspired in part by the Ferguson Commission, which recommended that cities focus more resources on the root causes of crime, organizers across the state echoed these calls.

But they largely fell on deaf ears.

After the murder of George Floyd in Minneapolis last year, the more controversial chant “defund the police” took hold among protesters.

Now, as city leaders in St. Louis and Kansas City push to redirect money from their police budgets towards various crime-prevention initiatives, they face fierce pushback from Republicans in Jefferson City who believe these actions embody the phrase “defund the police.”

“It’s useful to use the phrase ‘defund’ because it’s controversial,” said John Chasnoff, a leader in the Coalition Against Police Crimes and Repression. “We do need to provoke folks to reimagine differently.”

The provocation, intended or not, appears to have worked.

The state-appointed Kansas City Board of Police Commissioners is now suing Mayor Quinton Lucas and the Kansas City Council for voting to move $42 million out of the police budget into a “community services and prevention fund.”

While Kansas City controls the police budget, the commissioners run the department.

Meanwhile, in St. Louis, Mayor Tishaura Jones proposed to take $4 million out of the police budget and put some towards affordable housing as well as hiring social workers and clinicians who could handle 911 calls that deal with mental illness and drug addiction.

The budget moves in both cities inspired Republican lawmakers to call for Gov. Mike Parson to convene a special session to prevent them from “defunding” their police departments — just weeks after passing legislation aimed at preventing municipalities from decreasing their law enforcement budgets by more than 12 percent over five years.

Some St. Louis-area legislators have even gone so far as to float the idea of pushing for the state to retake control of St. Louis’ police department.

Both St. Louis and Kansas City broke homicide records in 2020, which Republicans point to as evidence that the mayors’ efforts are misguided. But proponents of each city’s actions say the rise in violence is exactly why they must try something different.

Jones and Lucas joined together to say they will not back down.

“Today’s grandstanding doesn’t make our communities any safer,” Jones and Lucas said in a joint statement. “As mayors of Missouri’s two largest cities, we are committed to collaborating with anyone willing to offer real solutions and investment to address the underlying conditions that lead to crime — poverty, lack of mental health services, housing instability, and more.”

In Kansas City, police won’t lose any money from the deal — they actually gain $3 million.

On May 20, the Kansas City Council approved ordinances that would put $42 million into a special fund earmarked for policing — but focused on “community engagement, outreach, prevention, intervention, and other public services.”

A separate ordinance would add that money — and $3 million more to hire new police recruits — back into the department’s budget through a contract with City Hall, giving city officials more input in how the board spends the money.

The city manager would then negotiate a contract with the Board of Police Commissioners on how the police department spends the money.

“This is not defunding the police,” said Kansas City Councilwoman Melissa Robinson. “This is an additive measure increasing funding for the police.”

The goal is to give city council members more say in how the state runs the city’s police department, which Lucas said shouldn’t be “Earth-shattering.”

While the loudest outcry about the move has come from Republicans, Kansas City leaders are also facing some pushback from activists who’ve been calling to re-envision public safety for years.

“People want to see something different,” said Justice Gaston, founder of the Reale Justice Network and an ACLU community organizer. “They are tired of the police brutality. And they are definitely tired of the shootings. If increasing police was the answer, then Kansas City should have had record low numbers last year for shootings, but we didn’t.”

While Gaston supports Lucas’s push to invest in communities that have historically been ignored, she doesn’t agree with the way it was done.

There was no transparency, she said, or opportunity for public comment in the process. Gaston’s group and a coalition of more than 10 community organizations sent a letter to Lucas last week expressing these concerns.

“The people around the table actually need to be those who are working in communities on these issues,” she said, “so that they can better direct how these funds should be spent.”

The ire about the lack of transparency has also been voiced in the Northland, where opposition to the plan runs deepest.

“We understand that the community is anxious to get this process started,” said Chris Hernandez, director of city communications. “However, as you may remember, the police board has sued the city, and we need to resolve that legal action before we can move forward with community engagement and any negotiations.”

Lucas said he plans to attend the Kansas City People’s Agenda virtual meeting on Saturday to answer Gaston’s and others’ questions. While he has differing ideas about policing than the coalition, he said he supports expanding ways to address root causes of crime.

“The place that Kansas City finds itself actually, though, is more between a rock and a hard place — in terms of, what is it that we can even do?” Lucas said.

Robinson said she has been talking with Platt about what her district needs: more community policing, a way to address drug houses, and youth development programs.

Convening a special session, she said, is an unnecessary use of taxpayers’ money.

“I don’t think we need a special session for the entire state of Missouri to talk about the only police department in the nation still controlled by the state government,” Washington said.

Lucas’ move has riled a host of Republican legislators in surrounding counties who are now calling for a special session. Sen. Tony Luetkemeyer, R-Parkville, said Kansas City’s ordinances would take power away from the state-appointed Board of Police Commissioners.

But Luetkemeyer sees a way to fix that through legislation.

“What I would like to see is a bill that would increase the minimum funding amount that the (police department) is required to get from the city,” Luetkemeyer said on KCMO Talk Radio, noting that the current state statute requires it to be 20 percent of a city’s revenue.

The attention on Kansas City ended up putting more heat on Jones, who only proposed to reallocate $4 million of the police department’s $160 million general fund budget towards affordable housing, victim services, and health professionals to answer emergency calls related to mental illness.

Last summer, a St. Louis commission — that includes leaders in policing and advocacy groups — issued a recommendation to establish a “civilian public safety response network.” This would allow 911 callers to access mental health workers, community health workers, and social workers to respond to calls that are not about crime.

St. Louis city has piloted a version of this with the Cops and Clinicians program, adapted from a 25-year-old program in New Haven, Conn. A spokeswoman from the commission said Jones’s proposal aligns with the group’s ask.

State Rep. Nick Schroer, R-O’Fallon, organized a press conference with other suburban GOP elected officials at the St. Louis Police Officers Association office last week to decry the move and add his voice to the call for a special session.

“We’re truly worried that by taking resources away from our law enforcement officers, especially when they need it the most, violent crime will skyrocket,” Schroer said.

At the press conference, Wildwood Mayor Jim Bowlin said he didn’t support the idea of “defunding the police” but said he was supportive of trying initiatives that would address mental illness and drug addiction differently.

“If we’re going to define ‘defunding the police’ as a way of removing funds available to hire and protect our police force, then I’m not in favor,” Bowlin said. “If the approach is going to be to look at other things that take into account the totality of the circumstances… I would support taking a look at where the line items go in terms of having a total approach to the situation.”

This is also why St. Louis Police Chief John Hayden said he supported Jones’ proposal to fill some of the police department’s vacancies with the “right professional” who could respond to calls dealing with drug addiction or mental illness.

Hayden testified at an April 29 city budget meeting that he had been trying to fill about 100 positions for about three years with no luck.

“I support the possibility of doing other things with that potential pool of money,” Hayden said. “I haven’t been able to fill those spots. It wouldn’t prevent us from hiring officers.”

He urged his legislative colleagues not to stand in the way of the policies that St. Louis voters elected Jones to champion, simply because they don’t like the “lingo” the protesters used.

Jones and Lucas criticized the Republican lawmakers for not offering any specific “solutions” at their proposed special session.

“Instead, they are advocating away the right of St. Louis and Kansas City residents to make decisions for our own communities,” they said.

And that sentiment runs deep in the community, said David Dwight, executive director of the Forward Through Ferguson, an organization tasked with advocating for the implementation of the Ferguson Commission’s recommendations.

St. Louis only won control of its police department in 2012, thanks to a statewide ballot measure.

The threat of a return to state control conjures ugly memories, Dwight said, noting that the city originally lost control of the department when Missouri’s segregationist governor implemented the policy during the Civil War to keep the Unionist city from controlling its own arsenal.

“They’re literally using the tools of white supremacy,” Dwight said, “in reaction to self-determination of one of the most diverse cities in the state.”