Local public health officials around Missouri say they’ve received little guidance from the state since the November ruling, leaving them on their own. 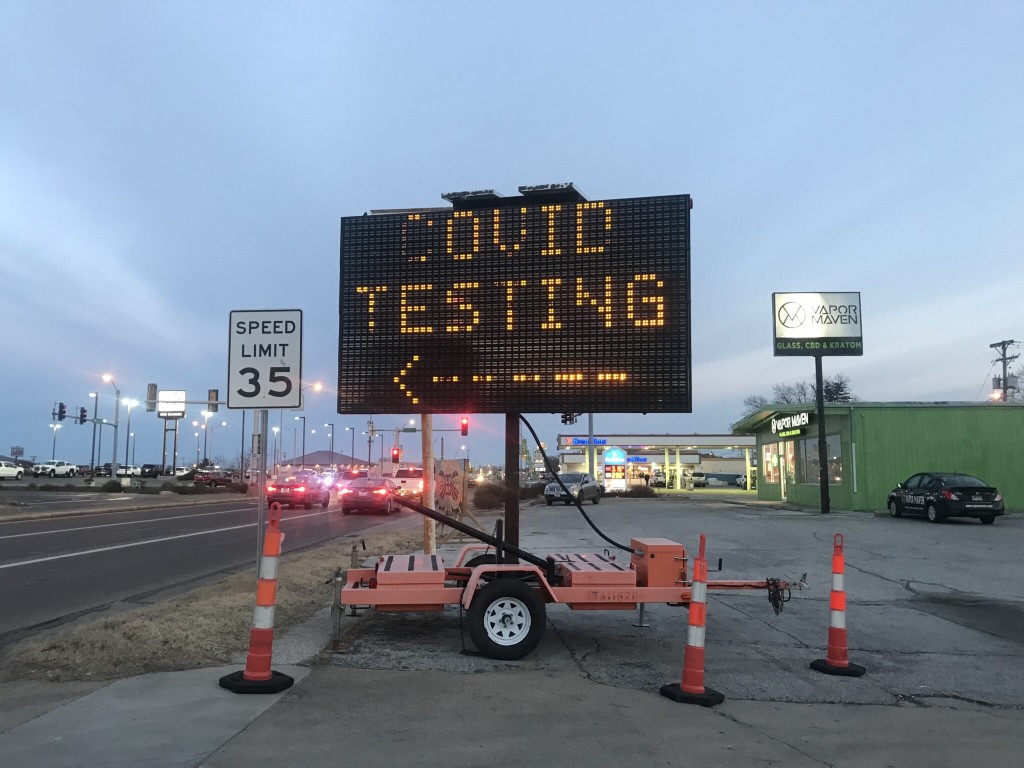 A sign directs residents to a state-sponsored COVID-19 testing site in Columbia on Jan. 25, 2022. // Photo by Tessa Weinberg/Missouri Independent

Two weeks after a Cole County judge stripped local health agencies of their ability to issue orders to mitigate the spread of COVID-19, a top official in the state health department predicted the impact would be much more far-reaching.

“The pending litigation is going to shut down most (local public health agency) activities, and based on the latest call I have taken, it won’t be just on COVID,” Adam Crumbliss, the agency’s director of the division of community and public health, wrote in a Dec. 7 email to officials in the governor’s office and state health department.

Whether he knew it or not, Crumbliss’ prediction was already coming true.

In St. Clair County in late November, state and local public health officials struggled to get the needed information to investigate an outbreak of respiratory syncytial virus in a daycare. After the court ruling was issued, and more specifically when Attorney General Eric Schmitt threatened litigation against any health department that failed to abide by it, the investigation was shelved.

Across the state in Jefferson County, the local health department gave up on issuing a quarantine order to a nursing home where COVID safety protocols weren’t being followed, potentially resulting in two deaths. They worried after the court ruling that they no longer had the authority.

In the immediate aftermath of the court ruling, public health experts warned it could undermine efforts to fend off other infectious diseases. Local officials pleaded with the state for clarity on the decision’s scope.

Emails obtained by The Independent through open records requests document confusion and growing frustration of local health departments as they waited for answers.

“I have schools and parents beating down my doors,” Chris Gilliam, the Howell County Health Department administrator, wrote to Crumbliss in early December asking when guidance may come.

It’s been over two months since the ruling, and local officials interviewed by The Independent say they’ve received little clarity and their questions have been ignored — leaving them virtually on their own to figure out how to move forward.

Lisa Cox, a spokeswoman for the Missouri Department of Health and Senior Services, said the department hasn’t issued any written statewide guidance but has continuously assisted local agencies on an individual basis when they have a specific request.

“They each have their own individual situations going on that lend themselves to individual discussions,” Cox said, “but these are all very capable and hardworking local public health administrators and teams.”

But local health departments said the advice from those individual discussions was to consult their attorneys. They want DHSS guidance to ensure a uniform response and answer questions that many of them share.

“It’s kind of like floating in a giant ocean with only a life jacket on and you’re all alone,” said Cheryl Eversole, administrator of the Dallas County Health Department.

The Missouri Supreme Court has been asked to review Cole County Circuit Judge Daniel Green’s decision, but in the meantime, local health departments say they’ve been left in limbo to determine what basic public health activities they still have the authority to pursue.

It’s led to a patchwork pattern of public health across the state.

“Until we get something in writing saying we are (allowed) to quarantine/isolate we will not be doing anything more than data entry of positive cases,” Eversole wrote to state officials the day the attorney general sent letters threatening legal action. “Our hands have been tied and the chair pulled out from under us.”

St. Clair County was seeing a rise in cases of respiratory syncytial virus, or RSV, in late November, when outbreaks hit local daycares.

While attempting to complete its investigation of an outbreak, the health center and state officials were repeatedly met with resistance from the daycare director, who cited the daycare’s privacy policy for withholding information.

Iris Queen, an epidemiology investigator for the St. Clair County Health Center, said the investigation was ultimately called off after Schmitt sent letters to public health departments demanding they comply with the court’s ruling or face legal action.

“Due to the lapse in time, limited information and uncertainty of our authority, we decided to cease the investigation at that time,” Queen told The Independent.

Sharing details of the St. Clair RSV outbreak, state officials wrote in Dec. 13 emails that they’d received similar feedback from other health departments and that it was an “ongoing problem.”

The incident reached Donald Kauerauf, director of DHSS, who stressed the severity of the situation the next day to Andrew Bailey, Gov. Mike Parson’s general counsel.

“I want to ensure the point isn’t lost that (local public health agencies) are now applying their interpretation of the court order to other highly communicable diseases,” Kauerauf wrote in a Dec. 14 email.

In a Dec. 8 email to DHSS attorneys, Jane Drummond, general counsel and vice president of legal affairs for the Missouri Hospital Association, wrote that some hospitals had already been notified by public health departments that they were no longer giving out COVID vaccines or flu shots after the attorney general’s threats.

In an interview, Drummond said she was aware of only a few health departments that notified hospitals.

Asked about whether Schmitt was concerned about the ruling’s effects on the mitigation of infectious diseases beyond COVID-19 and whether Schmitt thought more clarity was needed, the attorney general’s spokesman Chris Nuelle simply referred to previous comments where the office said the ruling voided public health orders, but would not prohibit the gathering or reporting of COVID-19 data.

The disruption the ruling caused was swift.

A day after the Cole County ruling was issued, Kelley Vollmar, executive director of the Jefferson County Health Department, wasn’t sure if she could still order a nursing home to quarantine.

The nursing home had been experiencing COVID cases, and Vollmar had just found out from the state that day that there had been two COVID-related deaths.

“Our staff do not believe that the facility is implementing the appropriate protocols to stop the spread of the illness and that we should pursue a quarantine order against the facility,” Vollmar wrote in an email to Crumbliss.

Her health department had issued such an order twice before, and found it helped quickly bring outbreaks under control. But the Cole County ruling left her unclear as to whether health departments still had that ability to quarantine a facility, and she asked the state to clarify.

In an interview, Vollmar said the state recommended she consult with her department’s own legal counsel. She ultimately decided that due to the ruling, the health department did not have the authority to close the facility.

Since the court ruling, the board overseeing Jefferson County’s health department  has voted to allow it to continue to enforce orders to limit the spread of communicable diseases — except for COVID-19. The board is among five local entities appealing the Cole County ruling.

“So even under our local order,” Vollmar said, “we are still not allowed to do isolation or quarantine for COVID.”

DHSS officials learned of Schmitt’s letters threatening legal action against public health departments “literally at the same time they did,” Lori Brenneke, a DHSS deputy division director, wrote to Kauerauf, Crumbliss and others the day the letters were sent.

Soon after Schmitt’s letters, DHSS asked local public health officials to submit their questions so the department could “provide a consistent and uniform response.”

The most common questions included whether the ruling would impact health departments’ ability to enforce orders beyond COVID, how to handle mask mandates and whether departments should still report case numbers to the state’s database.

“Who do we tell the public to contact when there is a large increase in cases when the community sees we have no teeth in our directives?” one question posed. “Do we give them the name and contact info to the Attorney General?”

Others asked what would happen during the next epidemic. Another pleaded: “Please tell us the black and white of this situation!”

A week later on Dec. 14, DHSS canceled a scheduled call with health departments, citing the fact that there had been calls the prior two weeks.

In response, Shock, the administrator for the Clinton County Health Department, urged DHSS officials for a meeting on behalf of all the agencies in his region by Dec. 22 — the day the ruling would become final.

“I understand the need for the State of Missouri and DHSS to have time to fully interrogate and process the decision, but given that, barring a stay in the decision, it will become effective on that date, guidance on the matter must be received prior to that time,” Shock wrote in a Dec. 14 email.

He received no response.

“It’s radio silence on their end, which is highly, highly unusual,” Shock said, later adding: “We’ve always viewed ourselves as partners of the state. And it doesn’t feel like we’re partners right now, that’s for sure. It feels like a very estranged relationship.”

Health department administrators interviewed by The Independent said they still have not received the promised answers to their questions about the ruling, like whether they can issue quarantines and isolations the next time there is a tuberculosis outbreak. DHSS resumed its regular calls with health departments, but they were devoted to going over things like COVID testing resources and updated CDC quarantine guidelines.

Cox said DHSS has addressed concerns through associations that represent the departments and on an individual basis, noting that Kauerauf met with Vollmar directly.

Vollmar said the conversation with Kauerauf was a productive one, and expressed hope that discussions like that can be held for other health departments to gain clarity.

“As locals, we don’t know where we stand,” Vollmar said. “And so we really want to ensure that we are able to maintain that collaboration with the state and stand strong as a unit for public health to be able to ensure our voices are still heard.”

Shock said he’s confident one day the guidance from the state will come. But he just doesn’t know when.

“Ultimately,” Shock said, “moving forward, the state has taken the posture… that they’re going to provide us with no guidance, no input and we are on our own. So we are proceeding as such.”