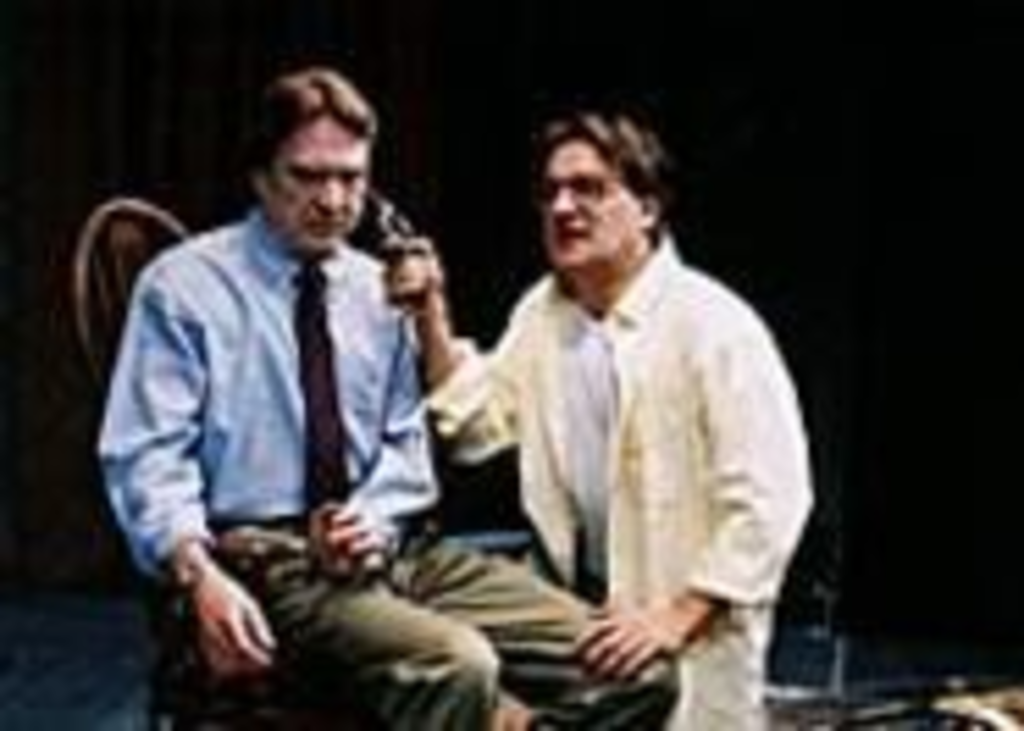 The pleasures of American Heartland Theatre’s production of Deathtrap come into focus via the play’s pretzel logic: If the plot were laid out on a map, it would go back and forth and in and out, twisting all expectations around its clever center. Plays-within-plays are usually fun; here it’s as if the audience were witnessing the play’s creation on the spot.

Sidney Bruhl (Gary Holcombe) is a famous author of thrillers — he’s the Agatha Christie of New England — yet his last winner was 18 years ago. As the play opens, he’s staring at a blank page and a mute typewriter. (There’s no computer because the play is set in 1978.) One wonders how long his wife, Myra (Donna Thomason), has been delivering her pep talks. If it’s a recent thing, she’s a loyal supporter; if it’s been 18 years, she’s delusional. Sidney’s clearly lost his edge.

A nugget of hope arrives parcel post. It’s a new play called Deathtrap by a young protégé named Clifford Anderson (Craig Benton). Sidney is sure it has all the elements of success and makes an off-the-cuff remark to Myra that he’d kill to call it his own. She tells herself he’s kidding, but she knows how desperate he’s been. A Faustian bargain for a good table at Sardi’s? In real life people have been known to go further, so Myra’s fooling only herself.

A saner solution is to call Anderson and propose a deal: collaboration, free and easy. Clifford brings his play and his eagerness to the Bruhl home, and the two writers bounce ideas around. But things take a turn, and the vicious jealousy of artists about to be superseded rears its head.

Props from past Bruhl plays adorn the walls, inviting proposed plot twists and a hint of impending violence. An ax, a pair of handcuffs, and a crossbow figure in the unfolding story, as do Myra’s heart condition and Clifford’s suspect mental health. The fourth and fifth characters provide convenient rationale for key developments: Helga Ten Dorp (Janice Wilt), a renowned psychic who has moved into the neighborhood, and Sidney’s attorney (Rick Holton), who has a sharp eye without really knowing much about his client. Ten Dorp knows there’s “pain … lots of pain” all about, and her ESP would be annoying if it weren’t so astute.

Thrillers expend a lot of energy keeping an audience guessing. And playwright Ira Levin (who also wrote Rosemary’s Baby and The Stepford Wives) punches holes in anything predictable. Although the Heartland has done Deathtrap before and the movie with Michael Caine and Christopher Reeve frequently shows up on cable, the play is apparently unknown to most. The majority of the house expressed amazement at a certain twist at the start of the second act that Holcombe and Benton play a bit too tentatively. Revealing the twist would spoil its effect; let’s just say that if you’ve guessed the nature of the men’s relationship, you win a Will & Grace T-shirt.

There is a great deal of physicality to the play that director Paul Hough keeps at the pitch of a wrestling meet. A silly sword fight between Wilt’s and Holton’s characters looks adolescent, but in one between Holcombe and Benton, the machismo exerted by the dueling writers has surely raised a few bruises. While fragile Myra is doing a little embroidery, the guys are fighting to the death, leaving fingerprints all over the room.

Holcombe is quite good at communicating Sidney’s frustration; writers need to write, and Holcombe plays it as if his writer’s block has erased his conscience. If Thomason seems a trifle girlish in an early scene, she squelches it soon enough by calling up the nervy duplicity of an accomplice. Benton’s seldom been better; his Clifford is charming and sexy yet a little creepy — he’s a shorter version of Vince Vaughn. Holton and Wilt give small but important characters a memorable enough presence to carry the final scene.

Scenic designer Del Unruh constructs an inviting office-cum-den kind of room with a real burning fireplace, but the large, flat stones on the hearth look suspiciously artificial. Shane Rowse’s lighting is most expressive during the second act’s thunderstorm, with one entire scene illuminated only by flames. The gothic weaponry is attributed to Jerry Vest, who must be a collector of macabre tastes. All in all, the collection adds foreboding shadows that make this Deathtrap more than just a rerun.