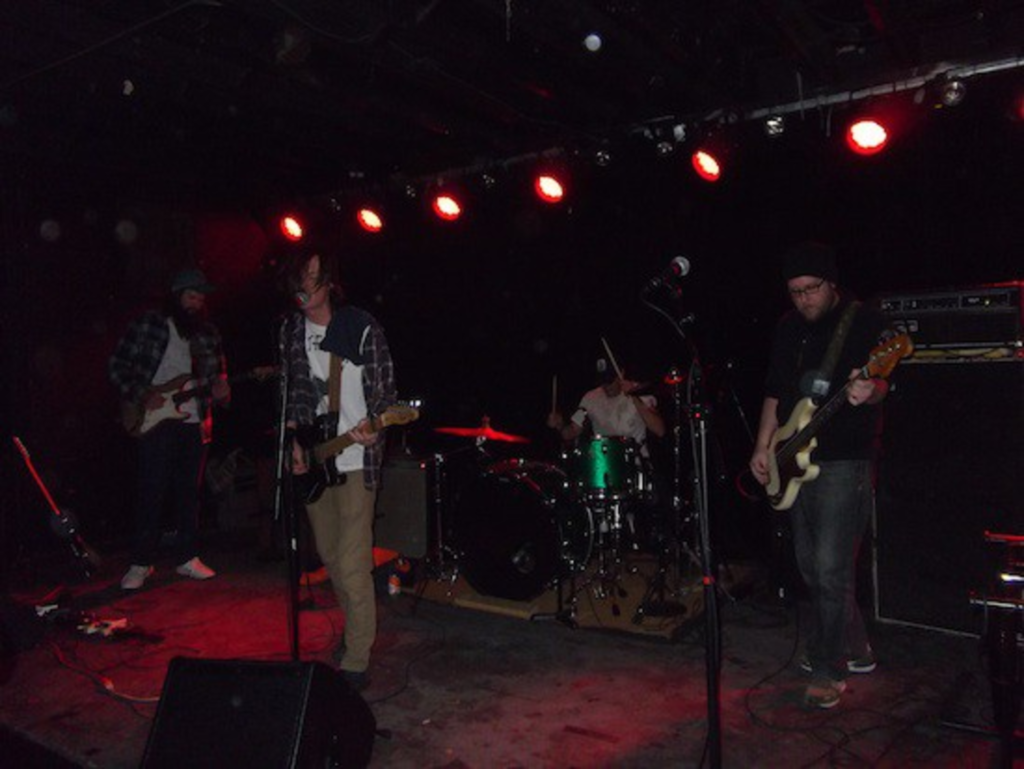 Genre tags are an unfortunate thing in the music world. They’re coined by critics, not bands, and yet once overused create layers and layers of skin to peel through before you can even find the music. Last night’s show at Riot Room found three touring bands fighting through a clutter of adjectives, from the most suspect “southern-fried” to the most overused “psychedelic.” In their approach to these tags, the bands ran the gamut from total exploitation to cool denial.

On the exploitative side, Spindrift’s lead singer changed from a normal wool overcoat into a poncho and, with the rest of his band, donned a cowboy hat. The woman on synths wore psych-rock face paint and possessed such a smug attitude during sound check that you wondered if she’d ever felt any sort of psychedelic connection to anything. A sentence projected behind the band read, “Stick this up your postmodern asses.”

Spindrift played a tight set of proficiently speedy spaghetti-western rock, complete with almost offensive “Injun” war cries. They seemed to be trying really hard to get one of their songs into the next Quentin Tarantino movie while presenting some don’t-give-a-fuck posturing. Masquerading as a quartet of outlaws, Spindrift brought real power by creating a complete show with a sound and a look. They were Blues Brothers that took one minute of that faux-western Muse song from 2001 and started a band around it. If they hadn’t transformed into their costumes onstage, they would have been more convincing, but sometimes a long and needy sound check is enough to ruin a band’s mystique.

Headliner Dead Confederate seemed every bit the opposite, possessing the “true cool” of a band that’s been doing it for too long to bother posturing. At the beginning of the band’s set, someone yelled out, “Welcome to Kansas City!”

A song later, another person yelled the welcome again, and the crowd shared a moment of confusion. The singer thanked us for coming out on a school night in a non-ironic way, which confused the crowd again, eliciting a meek ‘Welcome to Kansas City’ from someone in a corner. From that point on, the band decided it would be better if they just played their songs, and the crowd decided it would be better if they just listened to them. Sometimes conversation is unnecessary.

Dead Confederate’s story reads like a band that almost made it to the big time, and then spent the requisite time ambling toward success. Signed to Capital Records subsidiary TAO in 2007, the band enjoyed one week with their single “The Rat” on Billboard’s alternative Top 40 charts. Years later, Dead Confederate is playing to those at the Riot Room who remember that song.

Watson looked convincingly beaten up by life. He sang like a guy who had been through highs and lows and had come out reflective enough to communicate wisdom. The band itself played an impressive brand of grunge, operating on a powerful wavelength of quiet verses and loud choruses that melted toward each other.

Dead Confederate did not have to wear cowboy hats or even look like tough guys to seem like they’d fit into a saloon off the interstate in Kentucky. They looked like smart dudes who’d found their way into construction jobs in their 20s and had to realize that was where they were going to end up in their 30s, which is more fitting to any urban-cowboy mystique in 2013 than pointy boots and a bolo tie ever were. The “country flavor” was present somewhere but never brought center stage. The music contained its sadness without highlighting it, and no one was made to pretend they had ever been to a hoedown.

All in all, Dead Confederate was a pleasant surprise, one that deserves at least one more No. 39 spot on Billboard’s alternative charts before they give it up. Though the show featured no local acts, the Riot Room was packed, proving that there is a definite audience for alt-country psych-rock in Kansas City – and they’re paying attention.