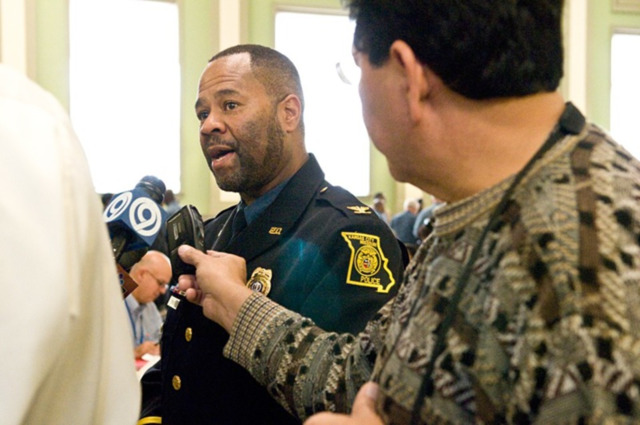 Since getting elected in November as Jackson County sheriff, retired Kansas City police chief Darryl Forté has been exhibiting worrisome flashes of weirdness.

Consider his response this week to the underwire bra controversy that is riveting Kansas City’s legal community. Female lawyers, social workers and others are complaining that they can’t visit their clients at the Jackson County jail if their undergarments trigger a metal detector that is part of a new security system. Jail personnel give them no choice but to remove their bras or leave and come back with ones that don’t contain wire if they want to meet face-to-face with clients.

The old Darryl Forté, known during his tenure on the police department as an innovator and a good listener, might have said, “Oh, this is a problem. Let’s get it fixed.”

But not Sheriff Forté. He’s doubled down, defended the jail’s security policies, and even filed a Sunshine Law request to look at emails that critics of the jail policy sent to county Legislator Crystal Williams.

“In part, my goals are to educate the community about open records…,” Forté told The Kansas City Star.

Oh, please. We are all in favor of members of the public exercising their rights to access government records. But a sheriff on a fishing expedition against lawyers and another public official is not a stellar example of the Sunshine Law at work.

As Williams put it in a statement: “This sure looks like someone seeking retaliation. Just fix the damned problem.”

The Pitch reached out to Forté and he responded via a direct message on Twitter.

“Write whatever you desire,” he said. “Facts apparently don’t matter. There is no bra policy and no one has been asked to remove any article of clothing.”

That assertion will come as news to the 74 lawyers who signed a letter denouncing the new security policies and calling for female attorneys to be granted access to their clients, regardless of how their bras are constructed.

Forté said today he will be discussing his version of “facts” at a news conference sometime next week.

This isn’t the first time the sheriff has shamelessly tried to pass off intimidation as education.

In February, Kansas City Star reporter Mike Hendricks wrote an eyepopping story that included details of a text message exchange he’d had with Forté. The sheriff expressed displeasure with a story Hendricks had written. “Remember what goes around comes around!” Forté texted. “What skeletons might you have in your closet? Stay tuned, stay safe and enjoy the evening.”

Hendricks advised him that The Star would publish that message. “Great!” Forté shot back. “I give you permission as well as encourage you to quote what you perceive to be a threat. My intent is not to threaten, my intent is to educate.”

This is Trumpian stuff, not at all normal. If Forté is indeed trying to teach us all, we’re beginning to pick up on the lesson, and it’s that the new Jackson County sheriff seems to be coming unhinged.