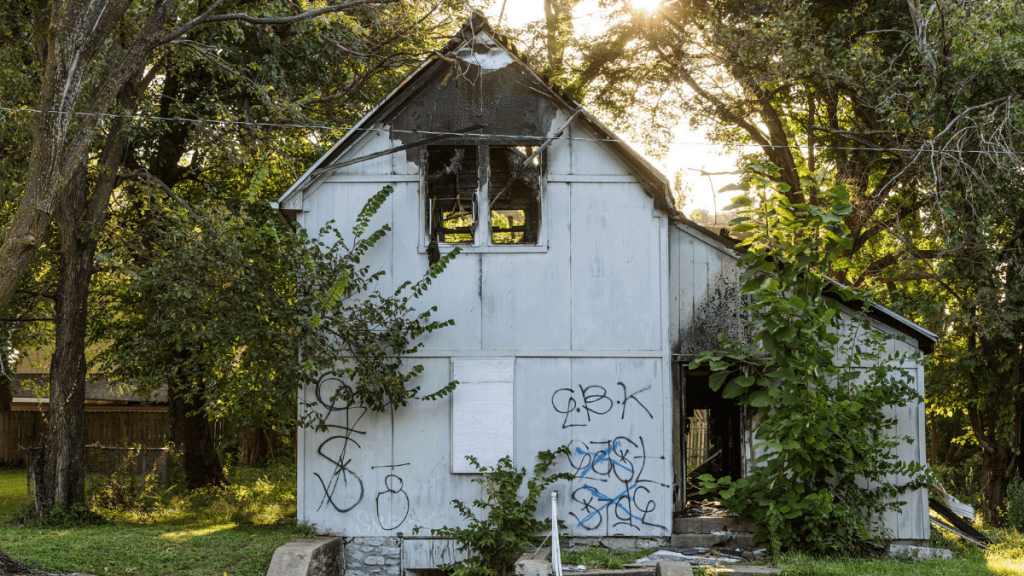 The burned and abandoned property at 2415 Kensington Ave. in Kansas City has graffiti covering the property. Much of the roof is missing or scorched, and fire damage can be seen throughout the home. // Chase Castor/The Beacon

The house on 2415 Kensington Ave. has been wasting away for years. Inspection records show that the building has been subjected to repeated illegal dumping and, most recently, an intense fire that damaged it beyond repair.

It was scheduled to be demolished in 2020, after Kansas City’s housing department reached out to its owner and confirmed that demolition was acceptable. That owner? The Land Bank of Kansas City.

Dangerous buildings in Kansas City are considered unsafe and unhealthy for anyone to live or work in. The properties often carry major structural issues, like a damaged roof or missing walls.

Just because a building is designated as dangerous doesn’t mean renovations are impossible — owners who are willing to put in the work can often get their building removed from the list. Land Bank properties, however, aren’t always repaired while they’re waiting for a buyer. That means the properties can decay for years, until they’re finally past the point of no return. 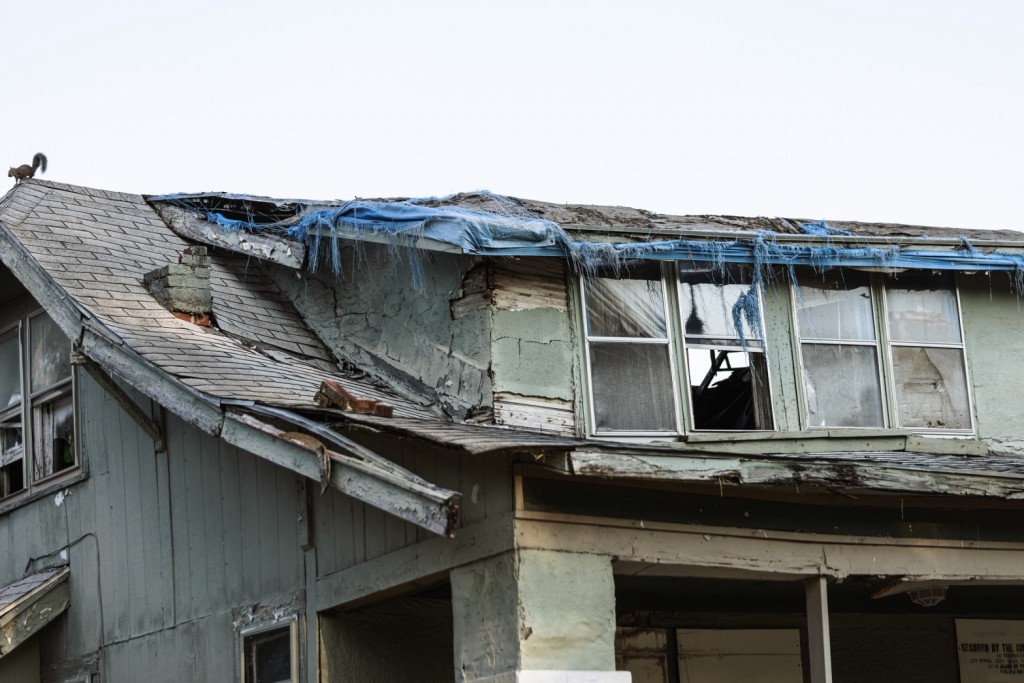 The abandoned property at 2604 Spruce Ave. in Kansas City. The second story is sinking into the first, sections of the roof are missing, and plaster is coming off the exterior. A sign painted on the door reads, “Secured by the city of KCMO. No trespassing.” // Chase Castor/The Beacon

Charlie Carter, 63, has been living next to the dilapidated building at 2415 Kensington Ave. for seven years. He’s witnessed three different fires erupt next door, just feet from his own home. He’s also called the city’s 311 hotline multiple times to report illegal trash dumping on that property.

“I’m praying they tear this down,” Carter said.

According to case files and inspection documents obtained by The Kansas City Beacon, the two-story property at 2415 Kensington Ave. caught fire twice, once in June 2020 and again in March 2021. In one document, an inspector wrote that the house “is so severely damaged that it cannot be boarded.” The Land Bank has owned this property since 2013.

Just a few blocks away is another dangerous building at 2604 Spruce Ave. The center of the roof is partially caved in. The light green paint is peeling and faded. The front yard is overrun with weeds.

Other buildings on the block are in varying stages of renovation, and some remodeled structures stand as a testament to the potential of once-vacant buildings.

A buyer for 2604 Spruce Ave. has never materialized, but the clock keeps ticking for the ailing home. In 2020, an inspector assessed the property and wrote: “This is a land bank property that has been deteriorating over the years and has become detrimental to all of its surroundings. The roof is in total disrepair, there are holes in it. … Will recommend for demo.”

It isn’t unusual for the Land Bank to hang on to properties even as they deteriorate.

“If it’s still structurally intact, we will keep it, as it’s a property that we’re actively trying to sell,” said John Baccala, spokesperson for the Housing and Community Development Department in Kansas City, Missouri.

The Land Bank does not rehabilitate the structures in its inventory, according to Bryant. Properties owned by the Land Bank are sold “as is,” and it’s the buyer’s responsibility to rehab the home and pay for renovation costs.

Not every dangerous building is in dire straits. At 4024 Bellefontaine Ave., the front stairs are cloaked in overgrown weeds, but the structure itself is still intact. Documents show it’s been owned by the Land Bank since 2013.

It’s just one of more than a dozen homes on this block filled with single-family homes. One nearby resident, Cecily Davis, said the abandoned home hasn’t caused too much trouble, adding that the yard is usually maintained. But the structure of the home still needs repairs.

When the Land Bank receives a property, it will market it for 21 days. Offers that are received will be reviewed and then presented to the board for approval. If no offers are received, it will continue to market the property and will discount it if there are more than five parcels of land that go unsold for a year in the same block.

If the property is sold before demolition becomes necessary, the repairs fall on the shoulders of the new buyer, who must sign a deed of trust outlining a specific repair plan.

“We’ve had several Land Bank properties on the dangerous building list that have been rehabbed,” Baccala said.

If repairs are not completed as promised, the property can be seized by the Land Bank and go back on the market. This is possible through a reversion clause, which allows the Land Bank to get the property’s title back if other contract conditions aren’t met.

Demolition of these properties is a costly affair for the city. Most demolitions cost about $8,000 to $10,000. Houses with asbestos or other safety hazards can cost even more to tear down. The city will exhaust every other option to preserve the buildings before moving forward with demolition, according to previous reporting by The Kansas City Beacon.

A push to demolish 800 properties on the dangerous buildings list from 2016 to 2018 was successful, but the city is still in the process of paying off the debt incurred by the $10 million project.

When informed that the home caught fire in June 2020, Bryant replied with a short email: “Good afternoon Jim, please demolish the above Land Bank structure. Thank you in advance.”

More than one year later, the house still hasn’t been demolished.